When we hear the name Cupid, images of Valentine’s Day, cubby winged babies, and true love come to mind. However, in the story of Daphne and Apollo, Cupid plays a much more sinister role.

While Cupid is not the star of the Apollo and Daphne story (as he is in the story of Cupid and Psyche) this story would not exist without him.

Greek and Roman mythology touches so many areas of our modern day lives. It lives in the etymology of words, and also the meanings behind many of our favorite items.

The Daphne and Apollo story is one of the more well known Greek and Roman myths. Keep reading to learn the story, and some fun facts about Apollo and Daphne. 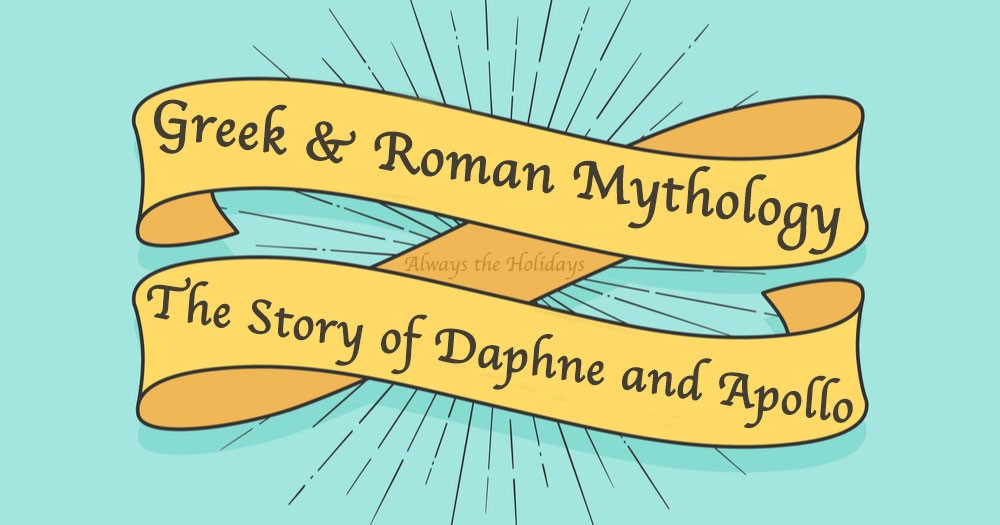 A note on Greek and Roman mythology 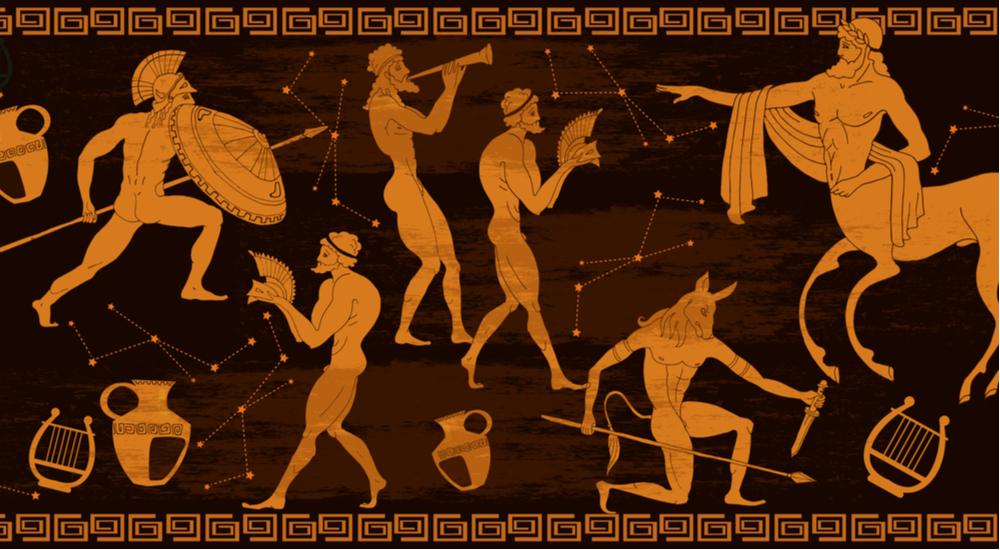 In the two types of mythology, names are often changed, and sometimes plot points differ. However, the story of Daphne and Apollo is largely the same in both Greek and Roman mythology.

Who is Daphne Greek mythology?

Before we dive into the Daphne and Apollo story, let’s go over a little bit of background information on Daphne. She is a minor figure in Greek and Roman mythology.

Daphne is a naiad nymph. Naiad nymphs are associated with freshwater. They can be found near rivers brooks, streams, and even in fountains and wells. Daphne’s association with freshwater makes ancestral sense, because her father is a river god named Peneus. 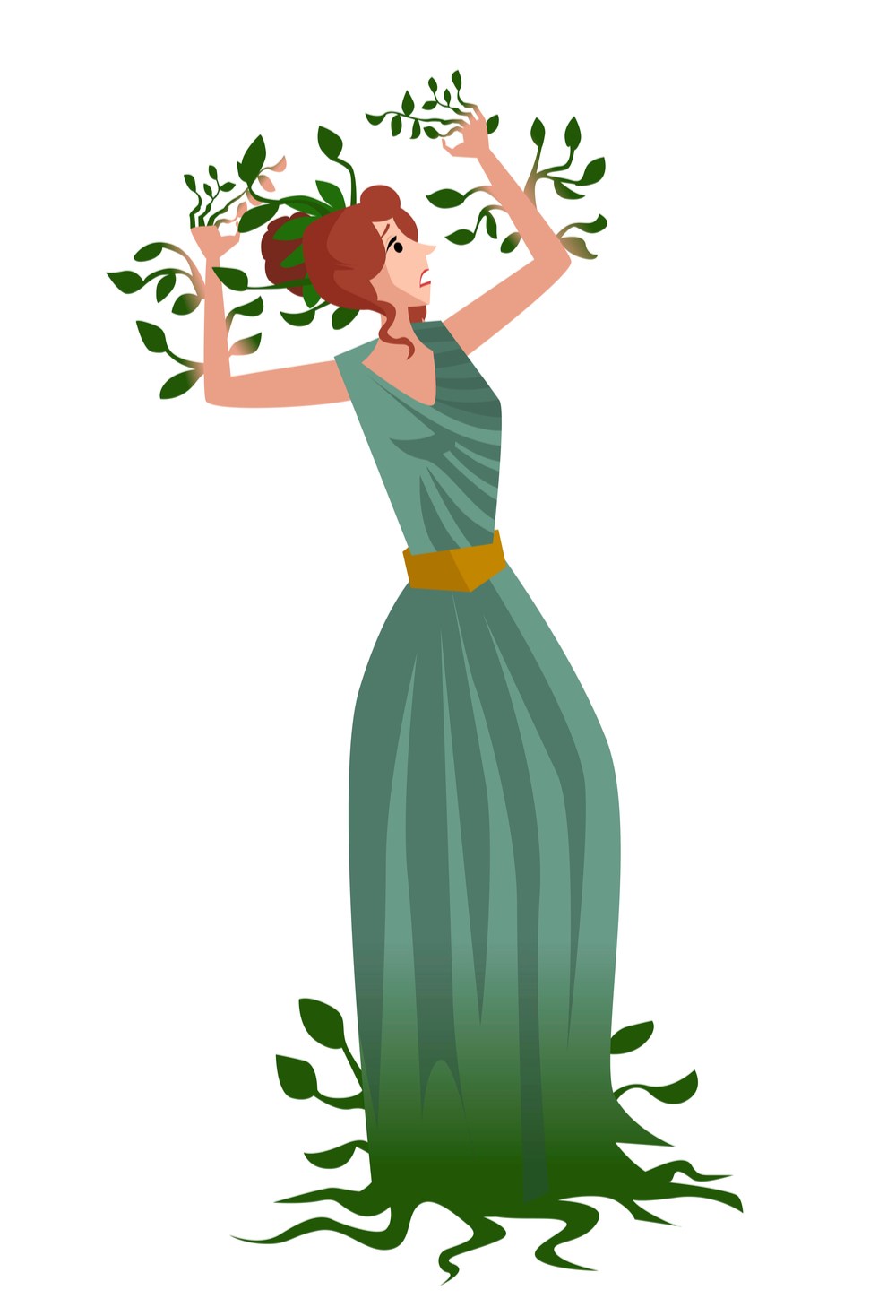 The symbol of Daphne is laurel. It is an evergreen shrub that is native to the Mediterranean region. The leaves it produces are called both laurel leaves and bay leaves. If you’ve ever used bay leaves in cooking, you’ve been using laurel!

The shrub goes by the names laurel, bay laurel, sweet bay and true laurel. Ancient Greeks also called the plant Daphne, making this nymph’s name synonymous with the shrub. In Greco-Roman history, laurel was used to make wreaths and crowns.

Laurel wreathes were a symbol of victory. In ancient Greece they were given as awards in the Pythian Games, and in ancient Rome they represented military victory.

Even today, we honor those who have made outstanding intellectual or creative achievements as laureates, which is derived from the word laurel (e.g. Nobel Prize winners are called Nobel laureates).

Be sure to check out our video on YouTube that shows how to grow bay laurel.

Who is Apollo Greek mythology?

Before we dive into the story of Apollo and Daphne, let’s go over a little bit of background information on Apollo. In both Greek and Roman mythology he is named Apollo. This is unusual, as he is one of the only gods to retain his name across both styles of mythology. 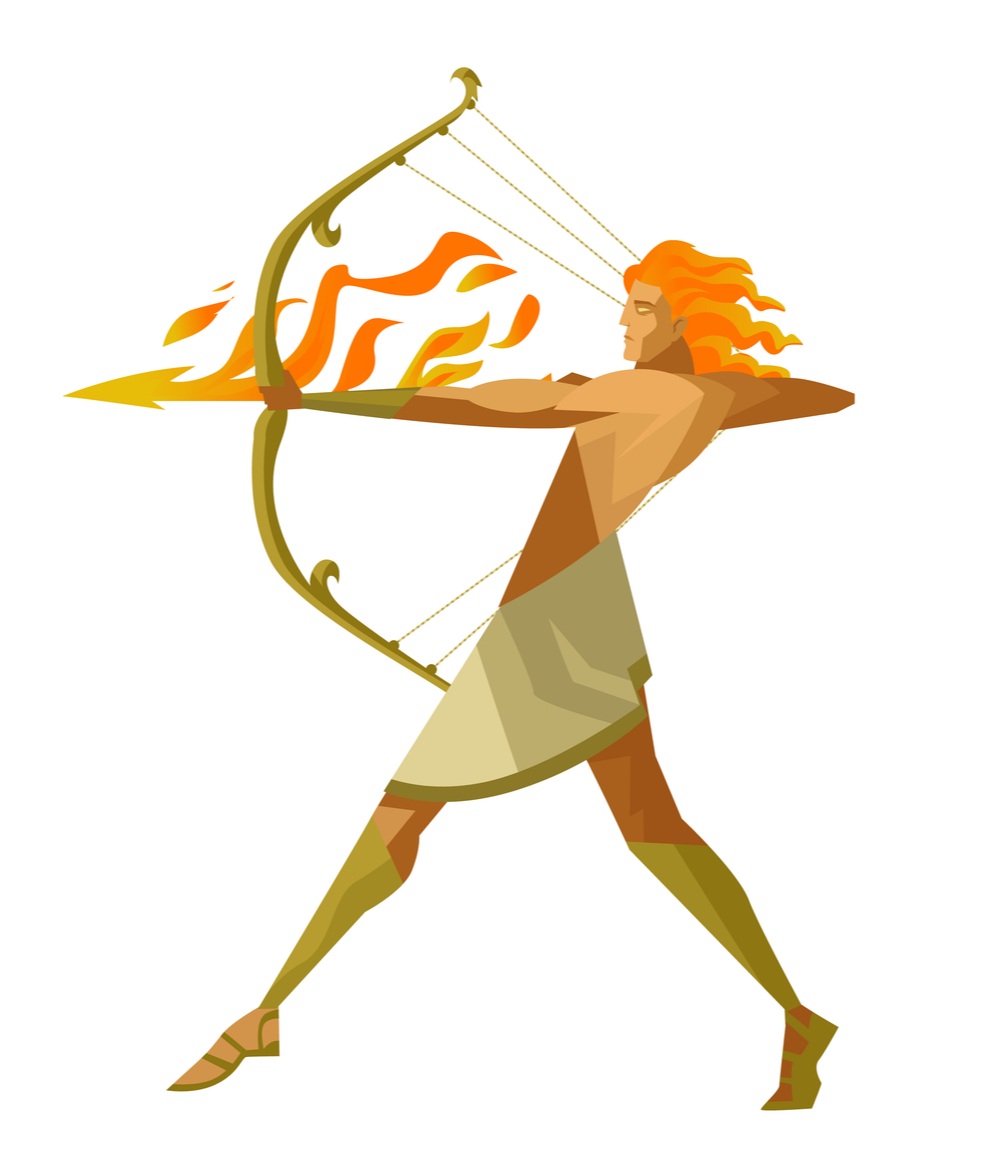 Apollo’s father is Zeus (Jupiter), the god of sky and thunder. His mother is Leto (Latona), the goddess of motherhood. Apollo has a twin sister who shares his passion for archery, named Artemis (Diana), who is observed as the goddess of the hunt.

What are the symbols of Apollo and what is Apollo the god of?

Apollo is a major figure in Greek and Roman mythology and is identified as a god of many things. Apollo is a god of archery, music, arts, poetry, truth, knowledge, prophecy, healing and plague.

Several of the things Apollo presides over are reflected in the symbols associated with him. The symbols of Apollo are the bow and arrow, the laurel wreath, the lyre, and the Python. 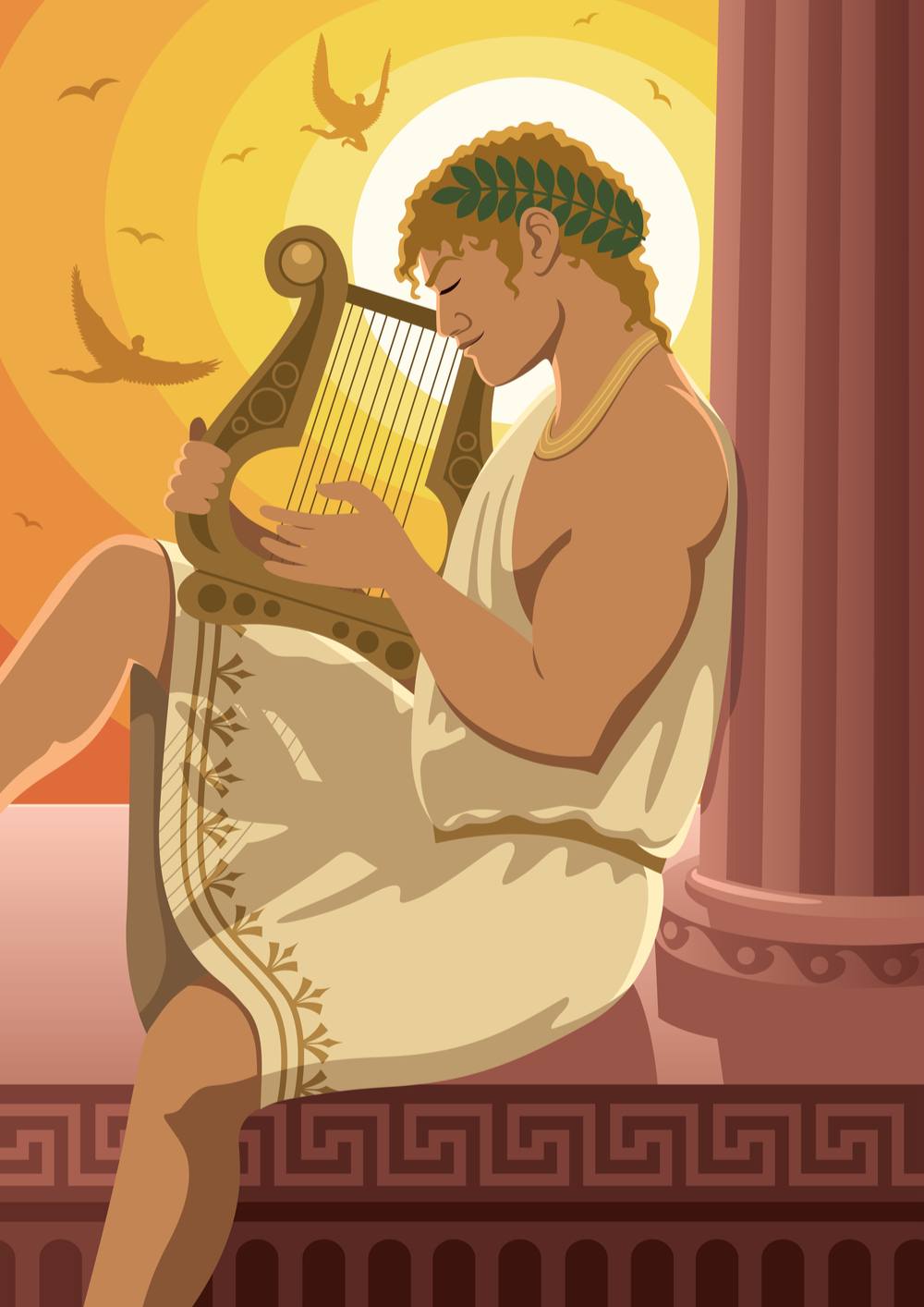 The bow and arrow are one the symbols of Apollo because he is heralded as a god of archery. He defeated Python (one of his other symbols) with a bow and arrow.

Apollo is a god of music, so it makes sense that he would have the lyre (a stringed instrument resembling a small U shaped harp) as one of his symbols. Hermes (Mercury) invented the lyre from a tortoise shell and gave it Apollo as a trade for Apollo’s cattle, which Hermes had stolen.

The laurel wreath is one of the Apollo’s symbols because of its importance in the Daphne and Apollo story.

The story of Daphne and Apollo

The story of Daphne and Apollo begins with a battle between Python and Apollo. Python (also called Pytho) was a serpent-like creature, sometimes depicted as a medieval dragon, that terrorized mankind.

Apollo traveled to Python’s home of Delphi, to fight the creature. Apollo shot Python with 1,000 arrows, wounding and killing him.

Apollo then came across Eros (referred to in Roman mythology as Cupid), who had his own bow and quiver of arrows. Apollo, drunk with arrogance, began to taunt Eros. Apollo thought himself superior and teased Eros to leave the archery to the real archers. 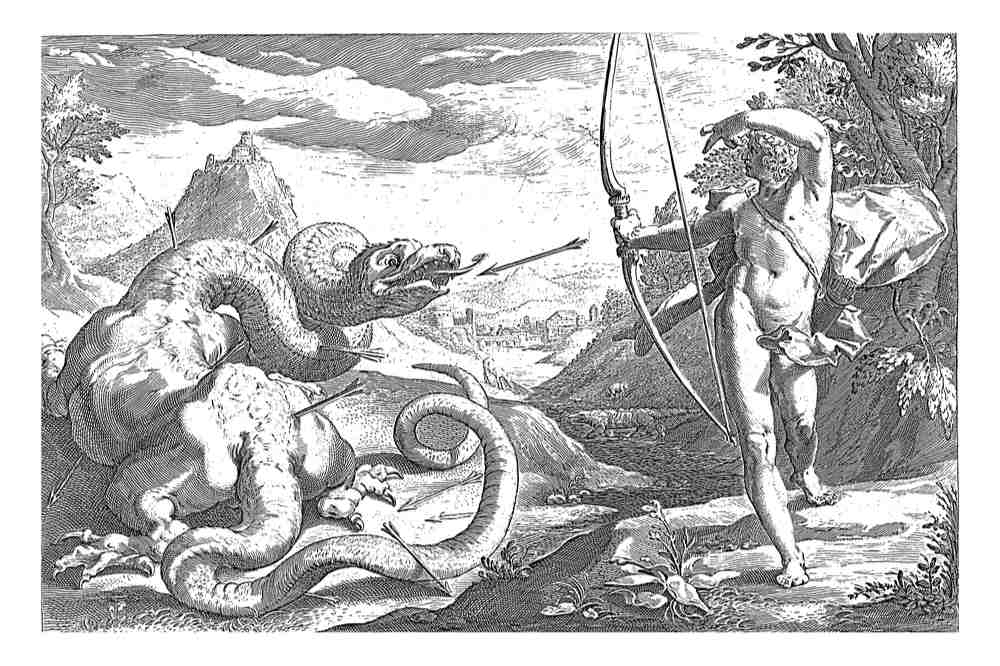 This enraged Eros. He told Apollo that even though the arrows Apollo shot would be the downfall of a great many beasts, Eros himself had the arrow that would be Apollo’s downfall.

Standing atop the rock of Mount Parnassus, Eros reached into his quiver of arrows, and pulled out a golden arrow with a pointed tip. He shot this arrow at Apollo.

The arrow was armed with the potential to make its target fall in love with the first person he saw. Apollo laid eyes on Daphne, a river nymph, falling madly in love.

Eros reached into his quiver of arrows to grab a second arrow, which he shot at Daphne. However, this arrow had a blunt tip made of lead. It possessed the power to make its target develop a deep hatred and desire to flee the first person its target laid eyes on.

Apollo, overcome with love, ran towards Daphne. She, overcome with hatred, ran away from him. Apollo chased Daphne across all the land, hoping to catch up to her, and profess his love. Daphne, filled with disgust, did everything in her power to stay as far away from Apollo as possible.

Resolution of the Daphne and Apollo story

Daphne, a virgin before Eros’s archery, dedicated herself to remaining a virgin forever. This displeased her father, the river god Peneus. He demanded Daphne get married and give him grandchildren.

Feeling deep hatred for Apollo, she begged her father to understand, and let her remain unmarried, which he eventually agreed to do.

In their chase, Apollo and Daphne were evenly matched. No matter how quickly as he chased her, she ran from him at the same speed. Eros, the mischievous meddler he was, intervened to help Apollo catch up to Daphne. 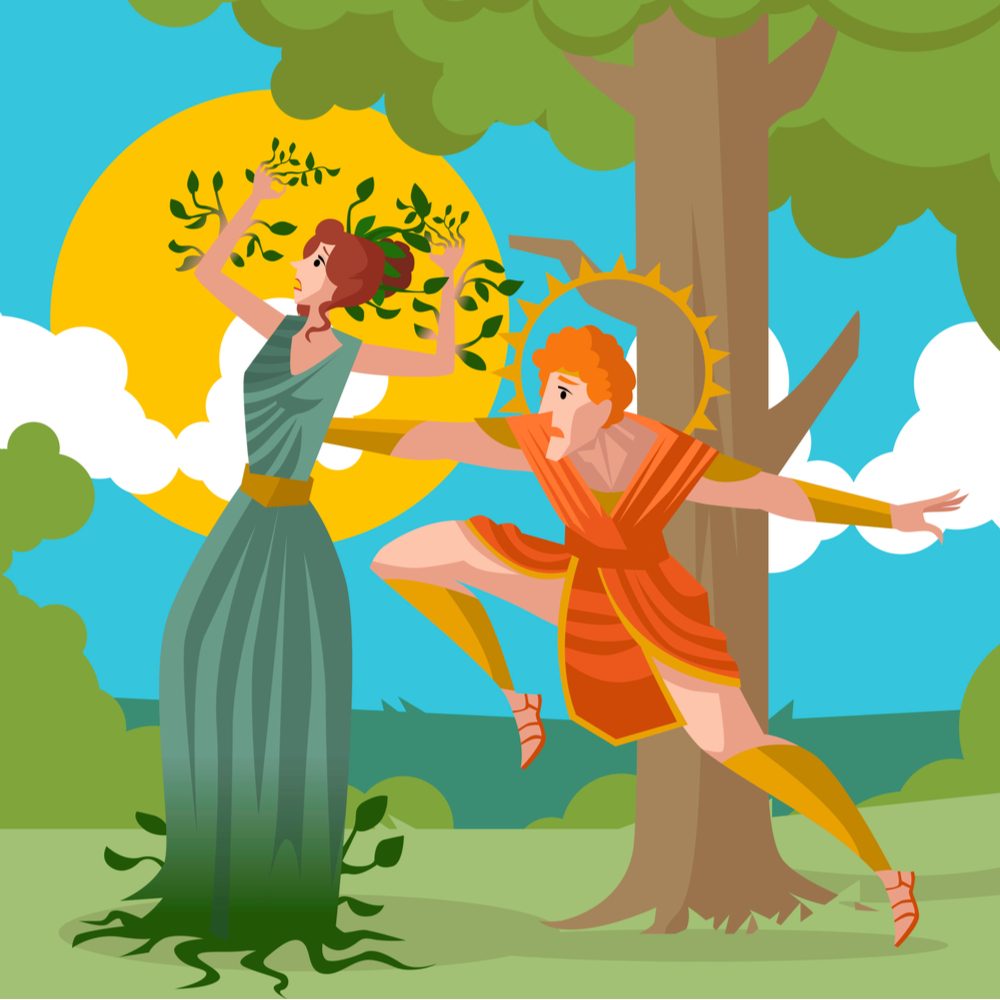 Overcome with fear of the possibility Apollo might catch her, Daphne called out to her father. She pleaded with him to help her be free of Apollo forever.

Daphne begged for her father to take away her beauty, which Apollo prized, even if it meant changing her form or allowing the earth to swallow her whole.

Peneus answered her pleas by turning Daphne into a laurel tree. Her legs transformed into roots, her arms became branches, and her hair turned into leaves. Apollo, standing at the foot of the bay laurel tree that once was his beloved, vowed to honor her forever.

He used his powers to make the bay laurel tree that was once Daphne, evergreen, rendering her leaves unable to decay. Laurel became became sacred to Apollo, because of its connection Daphne. It is one of the main symbols used to represent both Apollo and Daphne.

Let’s refresh your knowledge of these two figures in Greek and Roman mythology by reviewing the facts about Daphne and Apollo below: 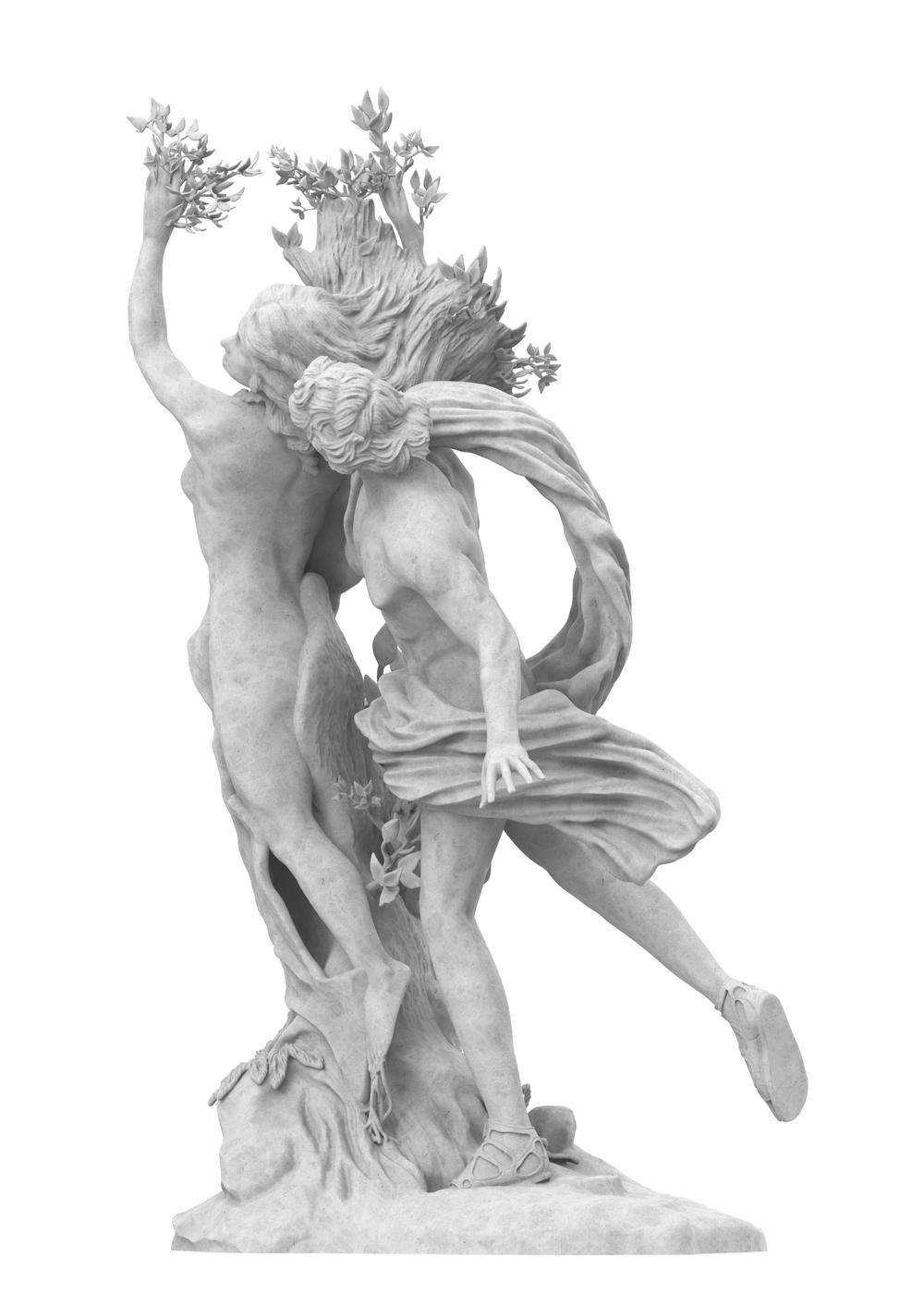 Apollo and Daphne’s effect on the Pythian Games

The story of Daphne and Apollo influenced many aspects of Greek life. In ancient Greece, there was a tournament called the Pythian Games that would not have existed if not for Apollo.

According to Ovid, a Roman poet, the Pythian games were held every four years to celebrate Apollo killing Python. Though they took place in various different locations, their most revered location was in Delphi, the place where Apollo vanquished Python. 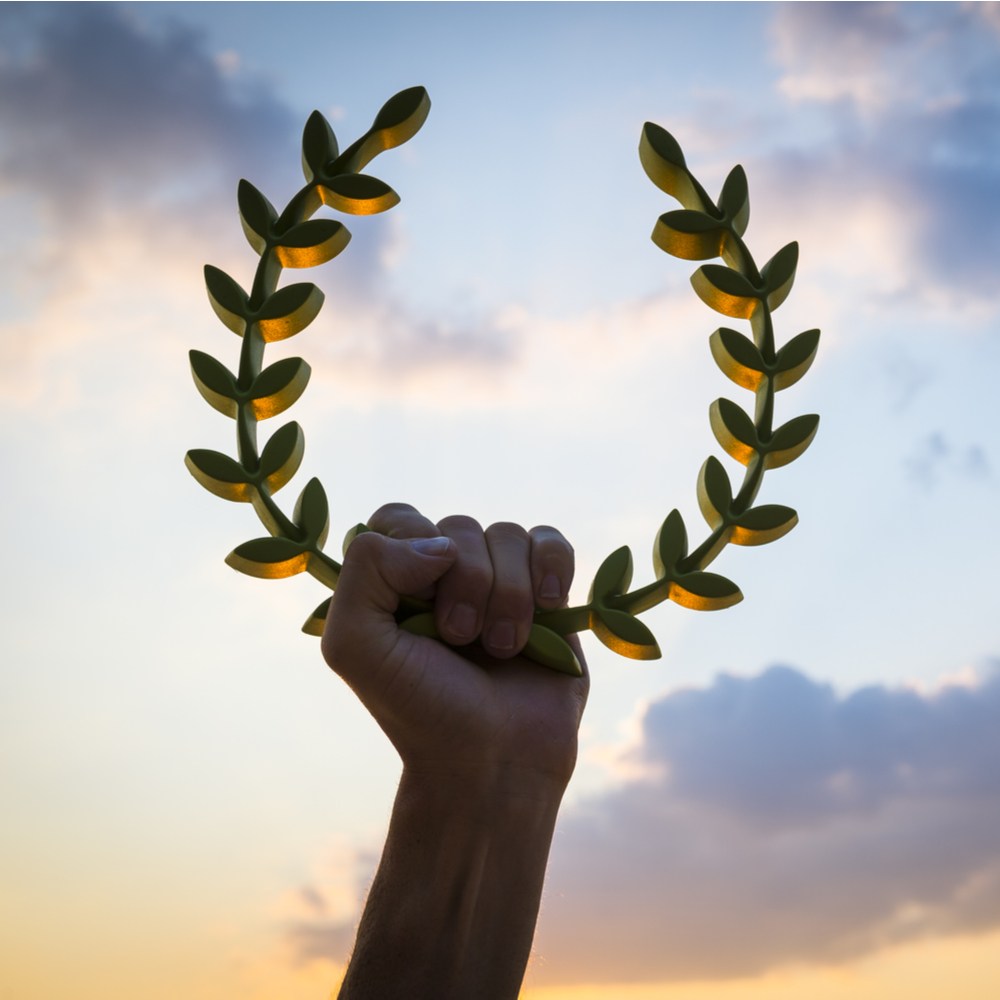 According to Aristotle, the games lasted six to eight days and began with a reenactment of Apollo’s victory over the serpent, followed by a sacrifice.

The winner of the Pythian Games did not receive money as a prize. Instead they were given a wreath of laurel. With laurel’s importance to Apollo, and its connection to Daphne, this was a special prize.

Facts about Apollo and Daphne story

Did you enjoy learning about these Greek and Roman figures? Let’s solidify your knowledge of the story of Daphne and Apollo by reviewing the main plot points. 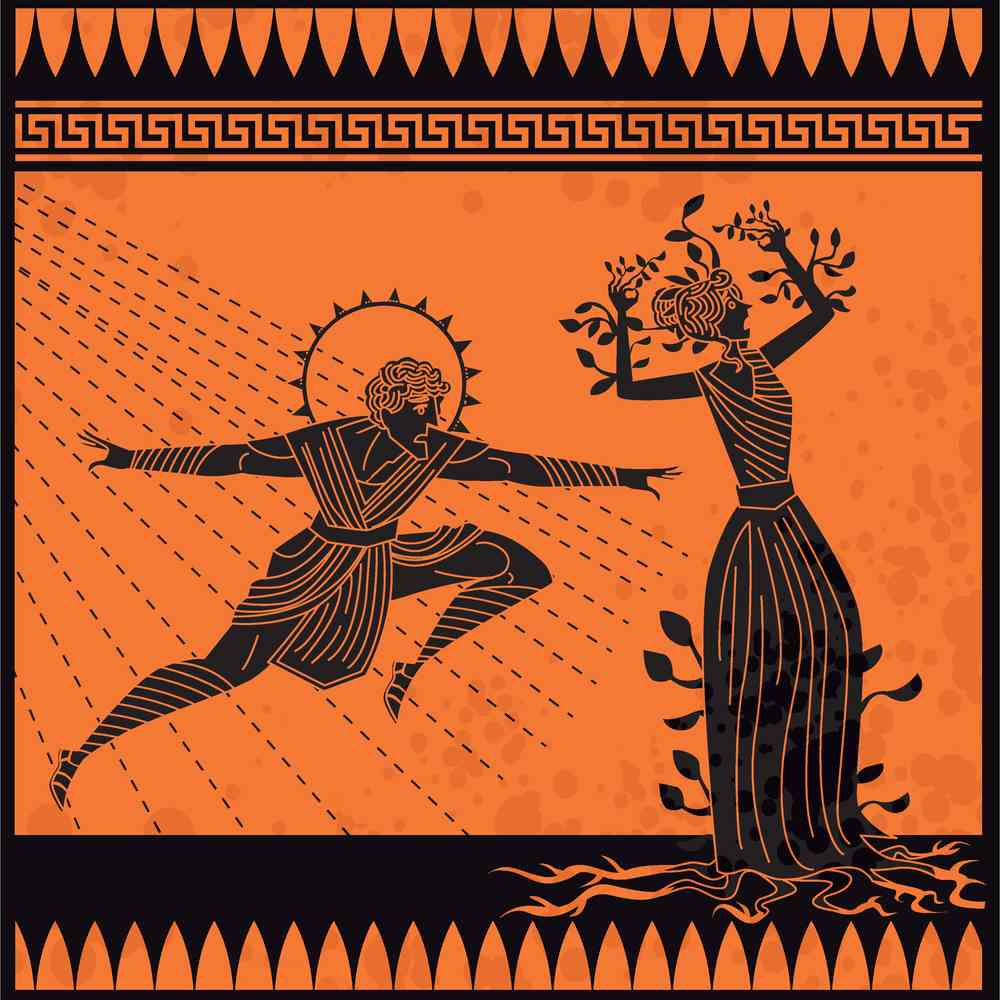 Brush up on your Greek and Roman mythology by learning about the story of Daphne and Apollo, plus fun facts about Apollo and Daphne. #GreekMythology #DaphneAndApollo #Cupid ❤️ 🏹 🌿 Click To Tweet

Looking for more posts like this one on Apollo and Daphne?

If you enjoyed learning about the story of Daphne and Apollo, be sure to also check out these posts to learn more fun facts about things related to mythology! 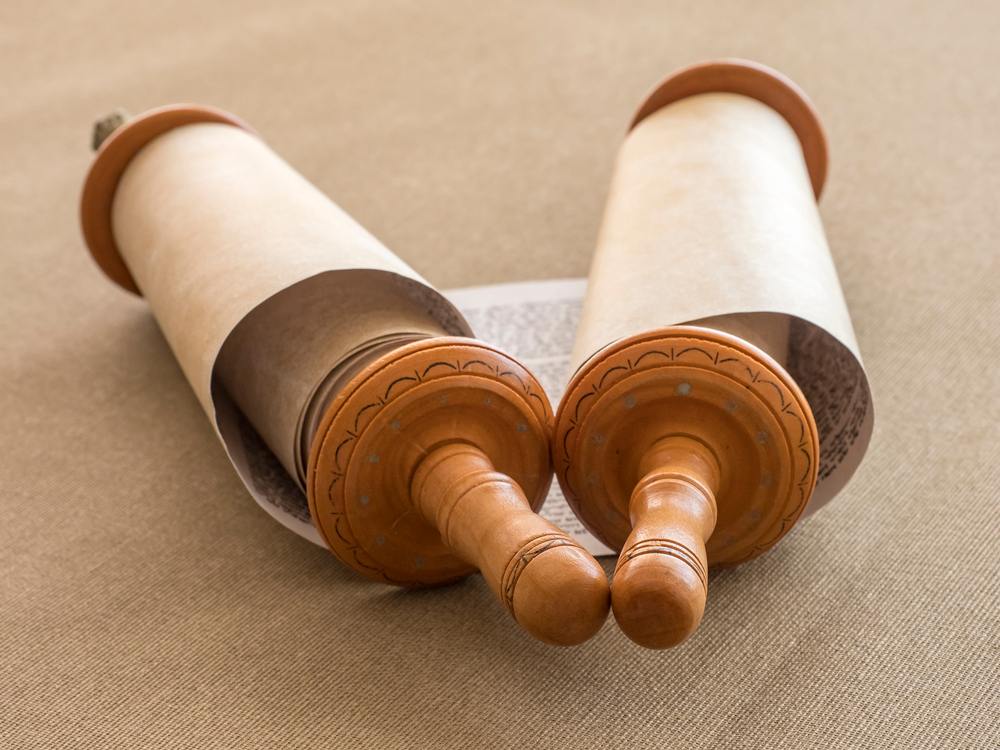 Would you like a reminder of this post for the Daphne and Apollo story? Just pin this image to one of your trivia boards on Pinterest so that you can easily find it later.

If this post put you in a Valentine’s Day mood, you can also watch our love quotes video on YouTube. 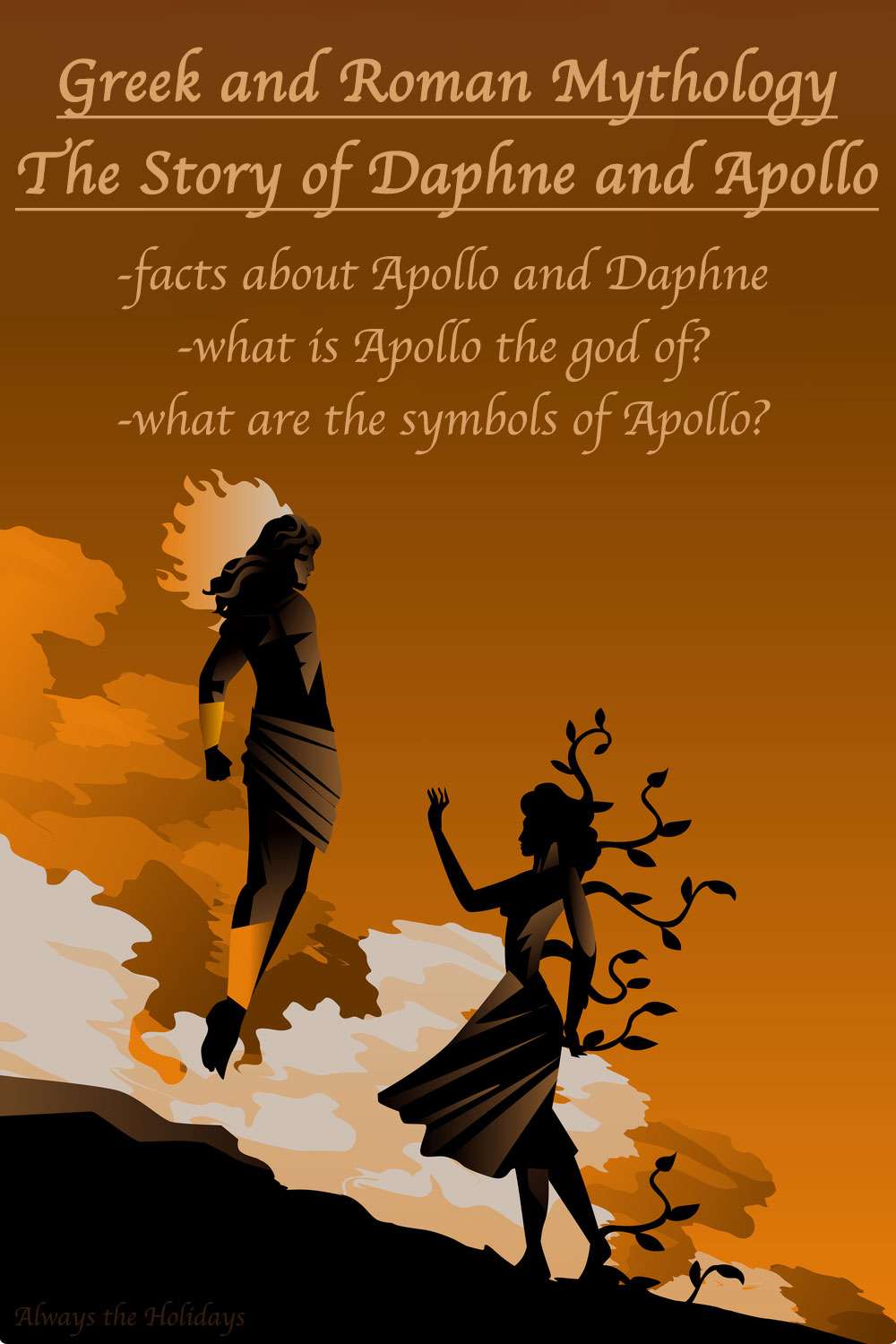