Thanksgiving themed snacks like these cute pilgrim hat appetizers will delight your guests. This recipe is a variation on the old “pigs in a blanket” appetizer, except in this case the pigs are all dressed up (and spiced up) for Thanksgiving.

To me, having fun with food is one of the best parts of the holiday season! It makes me feel like a kid again.

I love to share my gratitude for the people in my life by making them delicious recipes. This pilgrim hat appetizer is not only delicious, but adorable too! 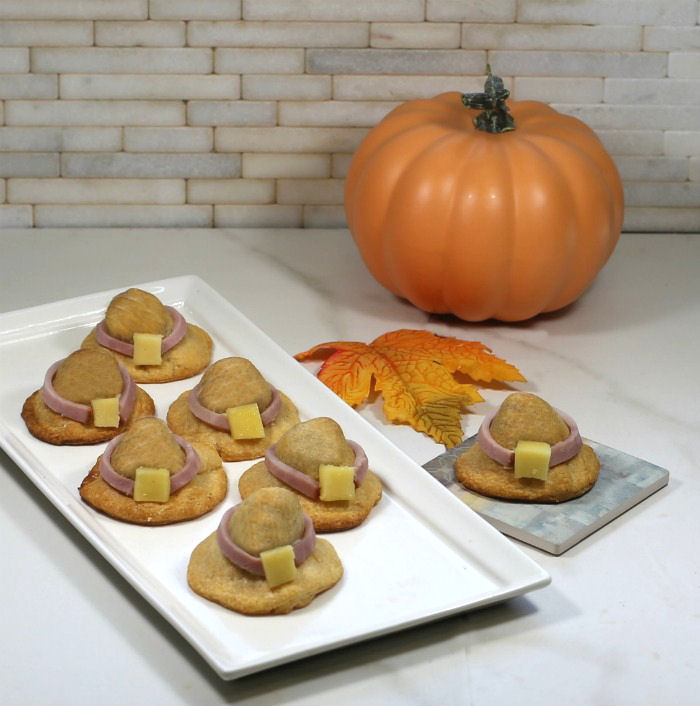 These little pilgrim hats have a spicy surprise in the center. The hat looks as though it could have been a part of the first Thanksgiving day!

For another fun Thanksgiving inspired recipe, check out my pilgrim hat cookies. They have a double dose of peanut butter going on!

For a Native American inspired recipe, be sure to also check out my teepee dirt cups. The kids will love them!

Thanksgiving is a day of gratitude with food starting with breakfast and ending with leftovers.

Crescent roll dough is very versatile. You can use it for these appetizers for Thanksgiving and in so many other ways. For another Thanksgiving recipe using pre-made dough, check out my baked cornucopia recipe.

If you are looking for something delicious to start the day, check out these cinnamon crescent recipes.

Making these cute pigs in a pilgrim hat appetizers

These spicy Pilgrim appetizers would make a great start to your Thanksgiving gathering and will surely put guests in a thankful mood!

The idea for this food project came from Family Fun Magazine which no longer has a print edition. 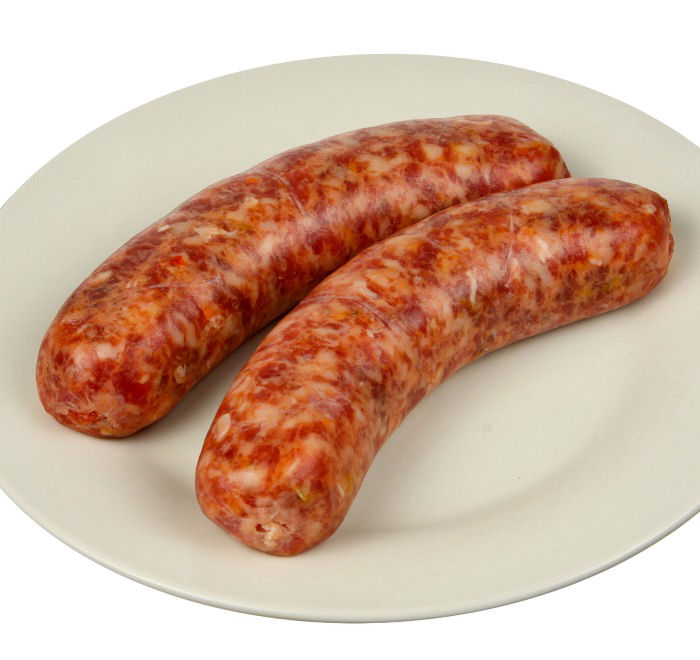 Gather your ingredients for the Thanksgiving appetizer:

You will also need a baking sheet lined with parchment paper or a silicone mat and a glass to trim the dough.

Start by cooking the Italian sausages in a non stick pan. I did this because the sausages are uncooked. Putting uncooked sausages in the dough and cooking it all together would yield soggy dough. 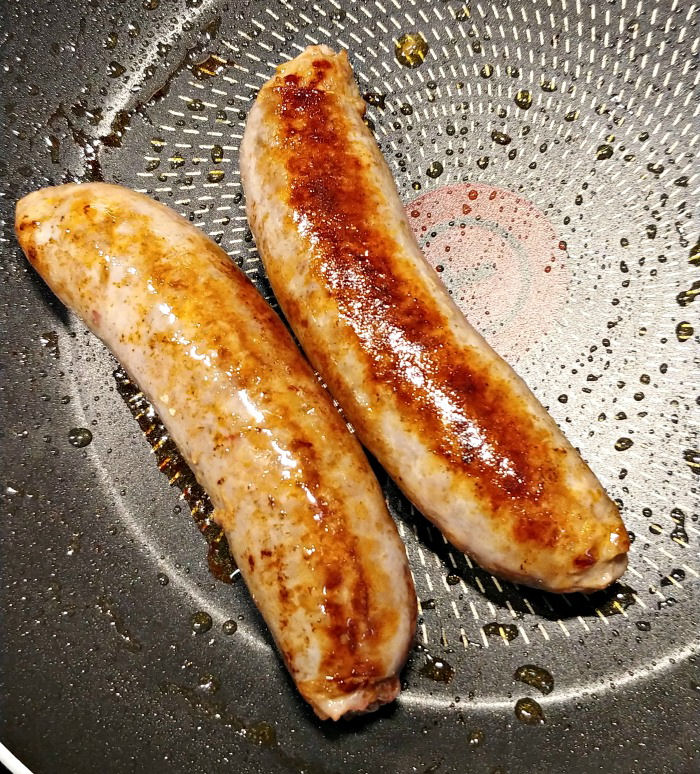 Cut the Italian sausages into 1 inch pieces when they are cooled. This will form the filling for the dome of the pilgrim hat.

If this shape is important to you, cook four sausages so that you have 8 rounded ends.

Separate the crescent dough into 8 triangles. Use a sharp knife to cut off the pointed end then form it into a base to give the sausages something to sit on.

Place the sausages slices on the dough pieces fairly wide apart on a silicone baking mat. 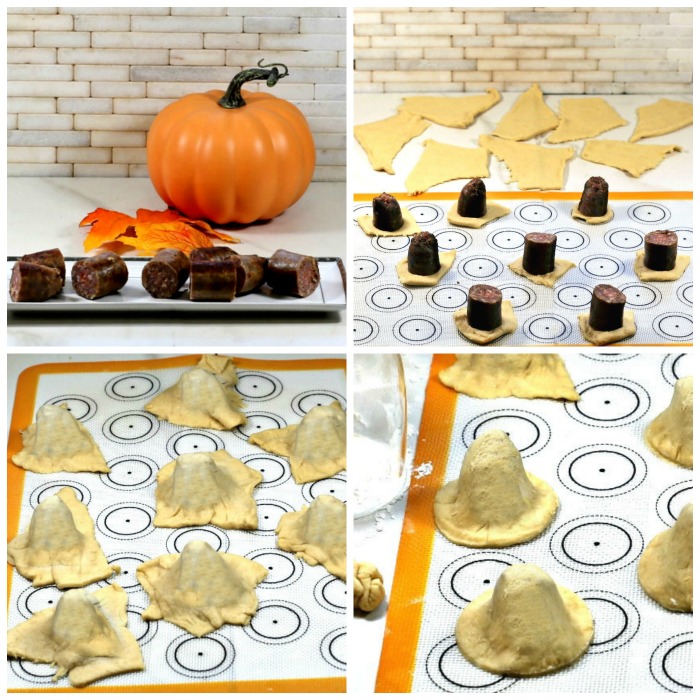 Drape the large piece of the dough over the sausage pieces being sure to leave plenty of extra dough around the outside edges for the brim.

Dip a glass into some flour and place it over the dough leaving enough room for the brim outside the dome of the hat. Press firmly and twist to cut the dough and give the Thanksgiving hat brim a round shape.

Add some flour to your hands and press the dough close to the sausage to smooth out and form the shape of the pilgrim’s hat. 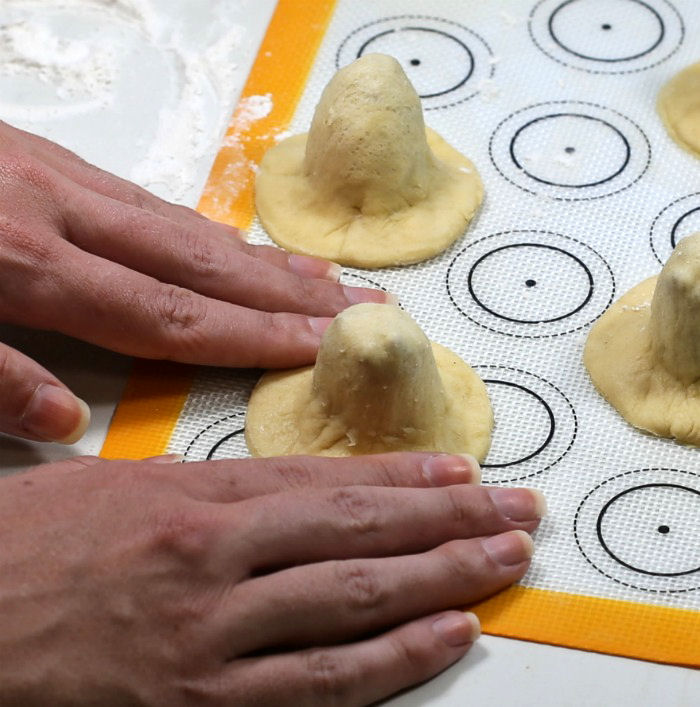 Repeat this procedure until you have made 8 pilgrim hat shapes.

Finishing up the hats is fun. This is where the strips of ham and square of cheese comes into play.

While the hats are baking, cut the ham into thin strips and the cheddar cheese into small squares. 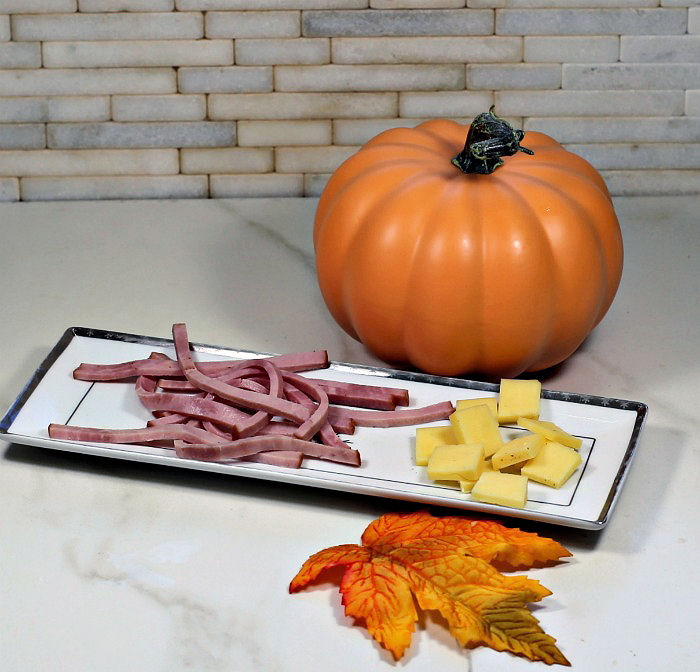 After baking, arrange the ham around the hats just at the brim line and then position the square of cheese on the brim making a buckle like shape. 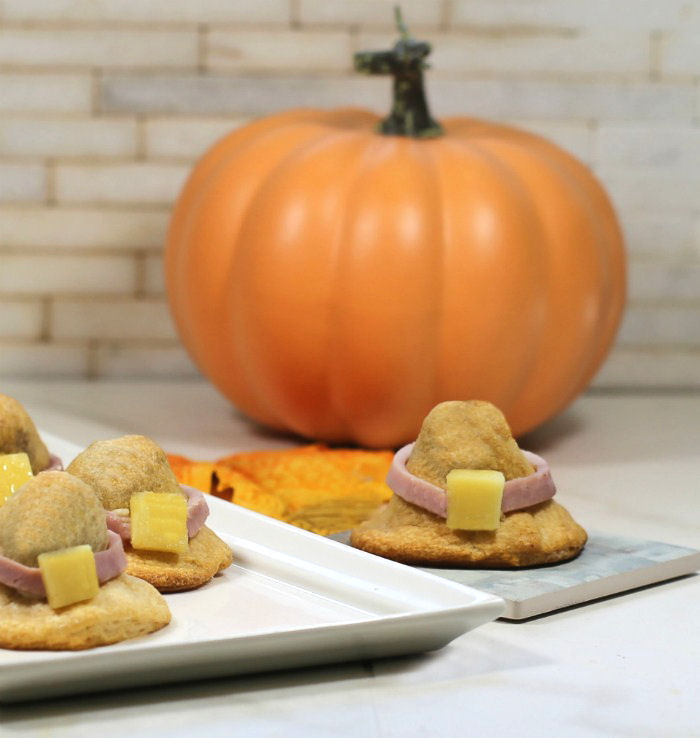 A dab of cream cheese will hold the brim and buckle, and also add a bit of extra flavor.

The pigs in a pilgrim hat are really tasty! Each hat has 188 calories which is not too bad for a baked treat.

These creative Thanksgiving appetizers are hearty with a slightly spicy center, a crisp outside and a sweetness that comes from the ham and cheese.

While the sausages are spicy, the recipe itself is not very spicy, because the flavor is balanced by the sweetness from the dough, ham and cheese.

It’s a well balanced comfort food bite that your guests will love. 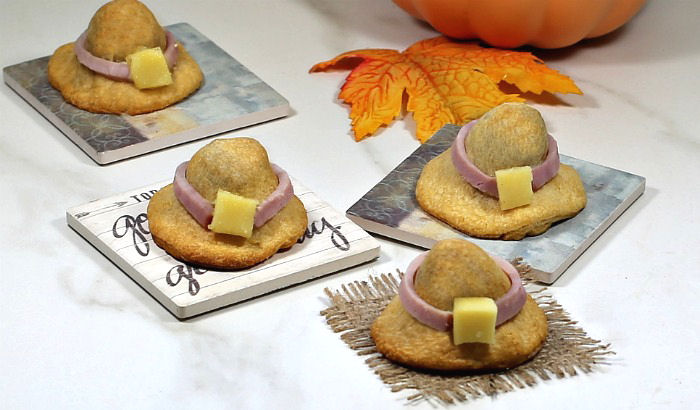 To make a batch for the kids, just use hot dogs instead of the sausage if your child doesn’t like spicy food.

Don’t forget to have a bowl of my Thanksgiving snack mix nearby with blessing printable labels for the snack bags to remind the kids what to be thankful for this year.

For another fun with food project, check out my Indian corn cakes. They are the perfect edible Thanksgiving centerpiece.

If you’re bringing these pilgrim hat appetizers with you to a Thanksgiving gathering, don’t forget to check out our Thanksgiving word search and word scramble. They’re fun for the whole family!

Would you like a reminder of this Thanksgiving party food recipe? Just pin this image to one of your Thanksgiving boards on Pinterest so that you can easily find it later. 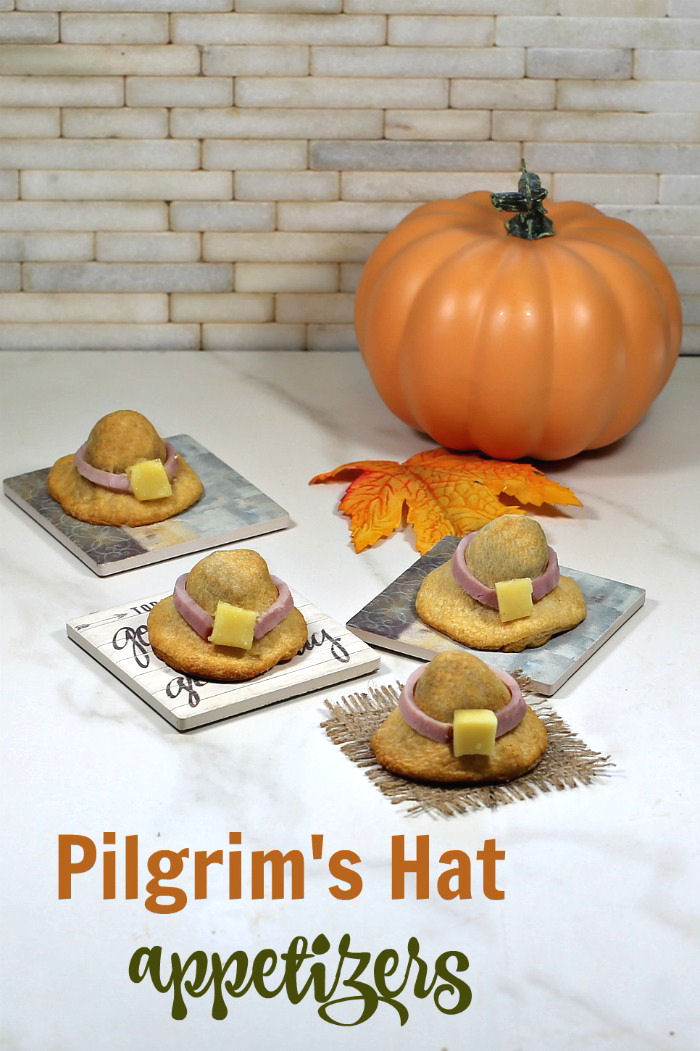 Admin note: This post for my pilgrim hat Thanksgiving appetizers first appeared on the blog in October of 2013. I have updated the post with all new photos, a printable recipe card and a video for you to enjoy.

The end pieces of the sausages are more round and yield a more domed appearance for the hat shape, while the  center pieces are flatter on top. If this shape is important to you, cook more sausages and save the center portion for another recipe.