Even though St. Patrick’s Day has passed, we aren’t quite done chasing rainbows just yet. National Find a Rainbow Day is right around the corner!

There’s something magical about rainbows that has the ability to make us feel like a child again, full of wonder and curiosity.

It’s no surprise that a phenomenon so awe-inspiring has its own national day!

Be sure to check out our national day’s guide for more fun days to celebrate.

When is National Find a Rainbow Day?

National Find a Rainbow Day occurs annually on April 3. It’s no accident that this national day falls in the spring.

Springtime frequently brings rain, one of the crucial elements for creating a rainbow. There’s a reason the phrase “April showers bring May flowers” is so often quoted!

How are rainbows formed?

While it might seem like rainbows are formed by magic and belong in the same category as unicorns and faeries, rainbows are actually made from science and not magic!

There are only two things you need to see a rainbow: water and light. They are most commonly seen right after it’s rained and the sun has come out.

Sunlight looks white, but it actually contains all of the colors in the color spectrum. 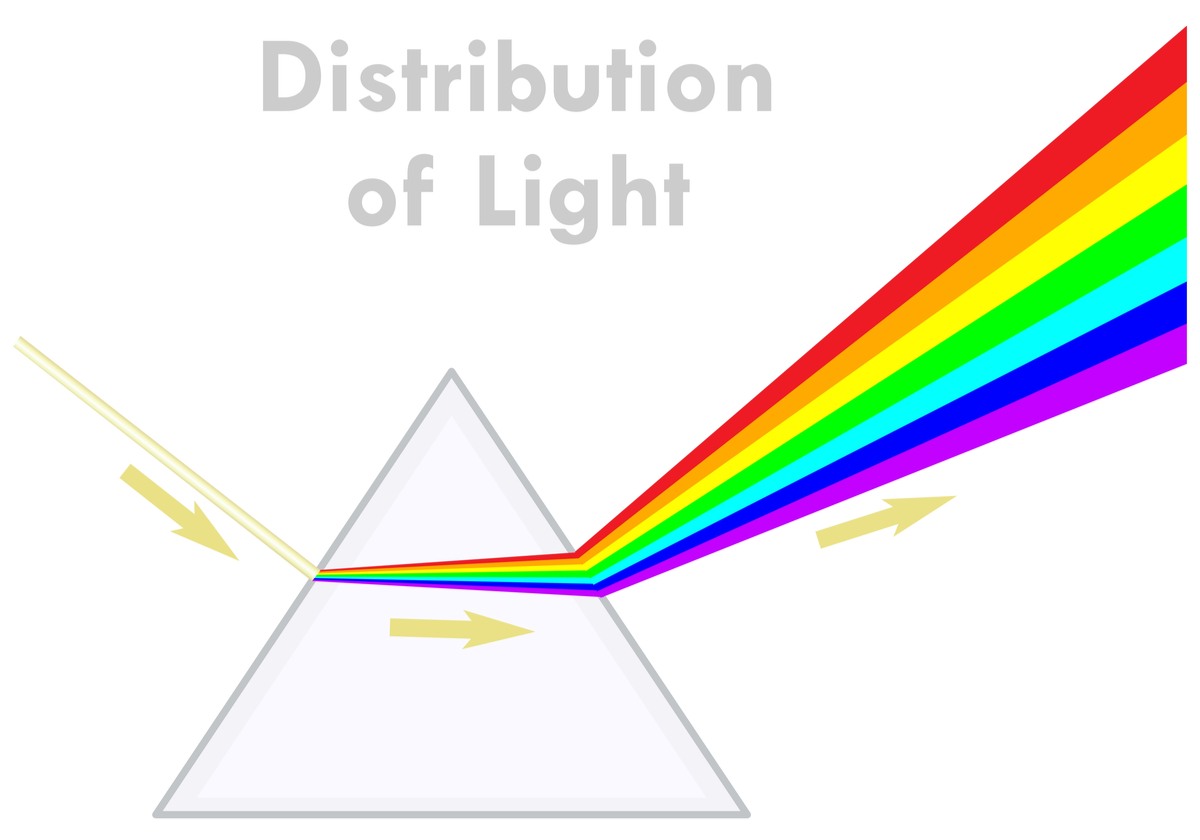 The sunlight is refracted (scattered and bent) through the raindrop, and then reflected back to us.

When reflected back, it appears in the colors of the rainbow: red orange yellow green blue indigo and violet (a handy mnemonic to remember this is Roy G. Biv).

If you love learning about colors, you may be interested to know that every holiday has colors associated with it that have a special meanings for that holiday.

Check out our in depth guides to the colors of Valentine’s Day, and the colors of Mardi Gras to learn more about these holiday colors.

Facts about rainbows for kids

Want to teach your children about rainbows? Check out these rainbow facts for kids. 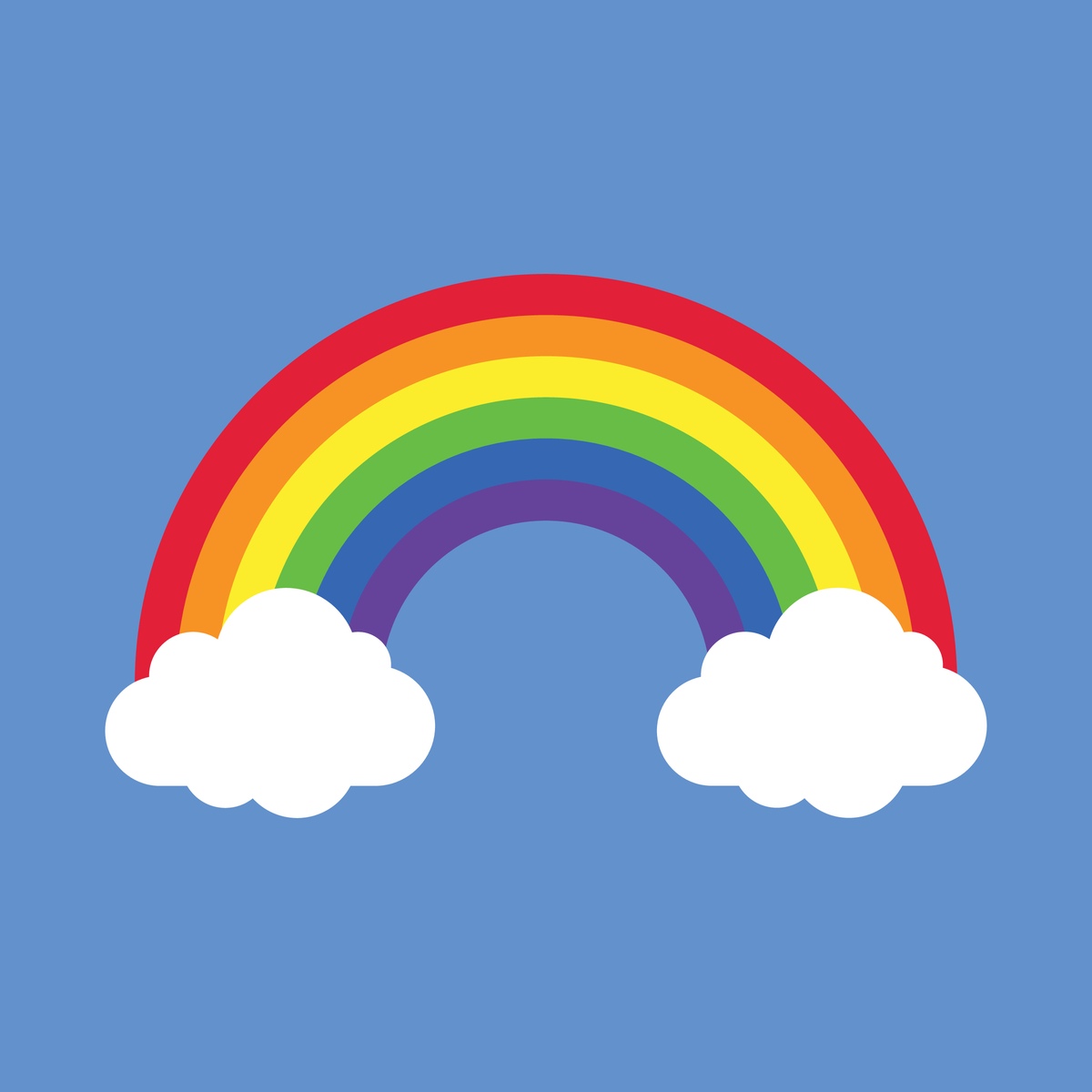 Did you know that you don’t need rain to see a rainbow? You just moisture in the air! Rainbows are also visible with fog, mist, spray, and dew.

You can even make your own rainbow by spraying water from a garden hose into the sky on a sunny day.

Check out these facts about rainbows to celebrate this national day. Some may surprise you! 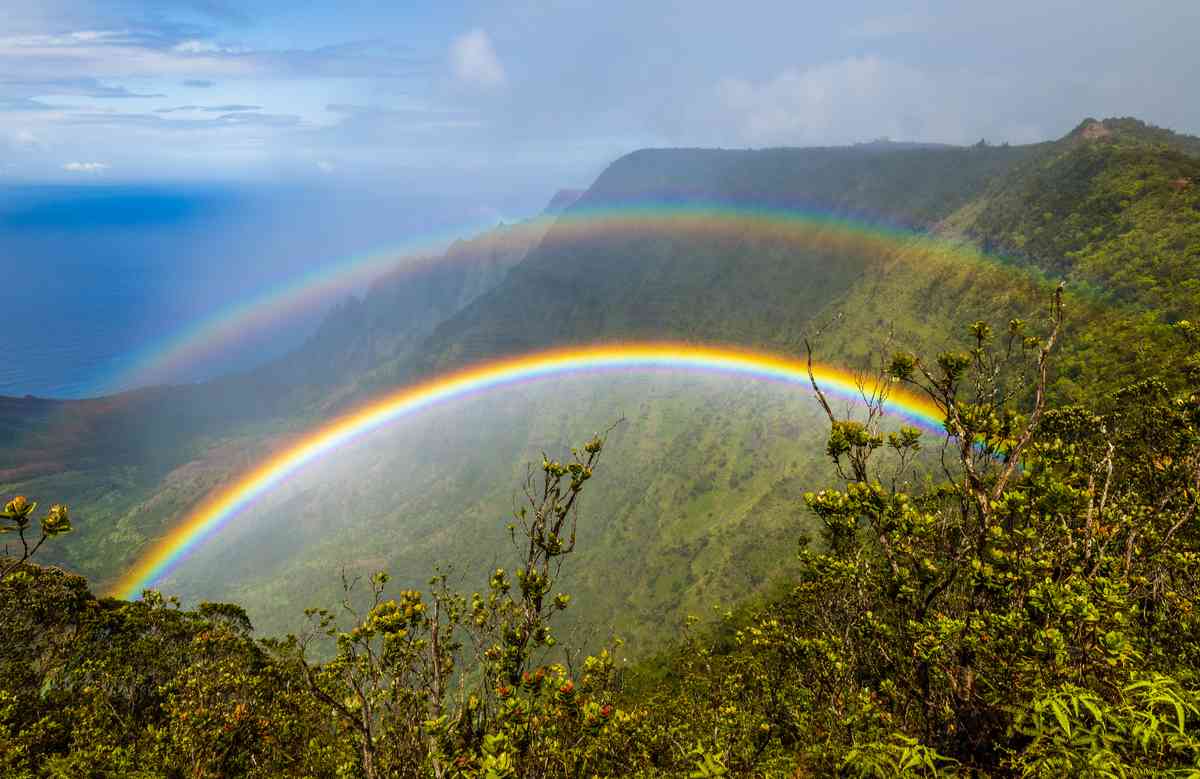 Have you enjoyed learning these rainbow facts for National Find a Rainbow Day? Make sure to check out our other posts with fun facts.

What do rainbows symbolize?

Rainbows symbolize hope. During a storm, things are dark, but rainbows remind us that the dark times will pass, and beautiful things will exist after.

This feeling of calm after the storm ties into the meaning of peace that is also present in rainbow symbolism.

Rainbows serve as a reminder that better days are to come. For this reason, new beginnings are one of the meanings of rainbow symbolism.

Rainbows also symbolize endings, as rainbows are associated with death in many cultures. Rainbows are thought of as a bridge to the afterlife. 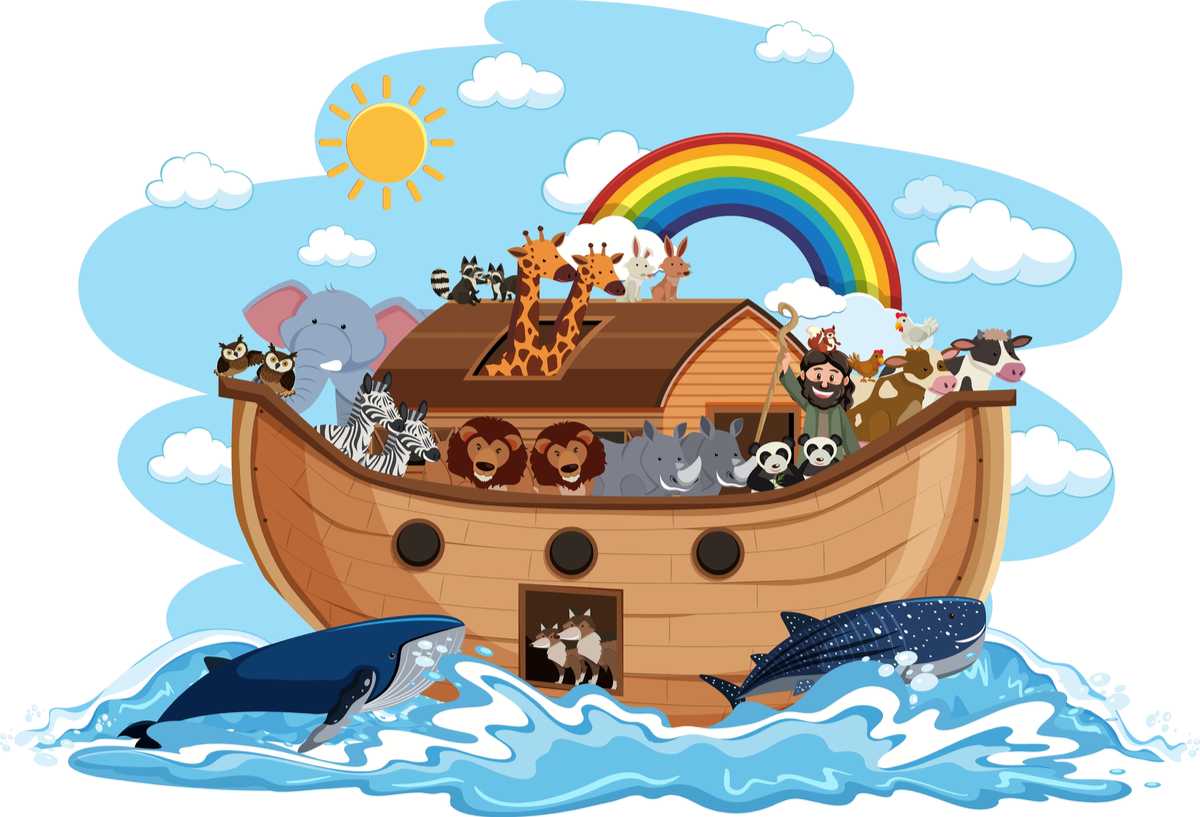 In Christianity, a rainbow appears in the story of Noah’s Ark. This rainbow symbolizes the promise God made to Noah: to never again destroy the earth with a flood.

Ancient Greeks and Romans believed that rainbows were a path to the gods. In Greek mythology, there is a goddess named Iris that is the goddess of the rainbow and messenger of the gods.

She is often depicted as the personification of a rainbow. It was believed she could create rainbows, and used them to travel through the sky.

Irish folklore said that leprechauns were cobblers of the the fairy world. They were paid in gold for their shoemaking and mending services. 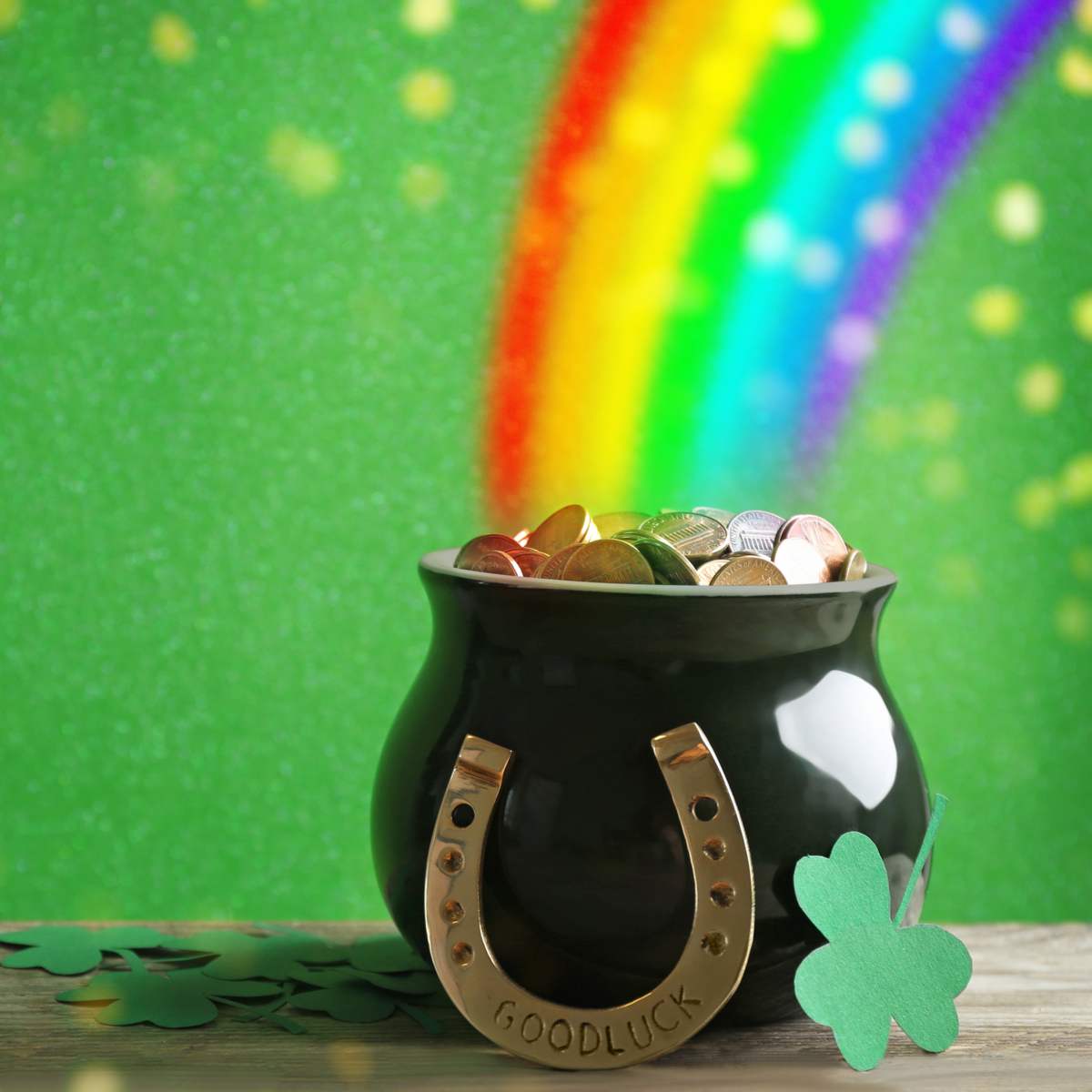 In an effort to keep their pot of gold safe, they hid it at the bottom a rainbow. As you now know, you can’t actually reach the end of a rainbow, so their gold is safely hidden!

In these stories rainbows represented treasure, luck and leprechauns.

Have you liked learning about National Find a Rainbow Day? Here’s some more rainbow facts for you to enjoy! 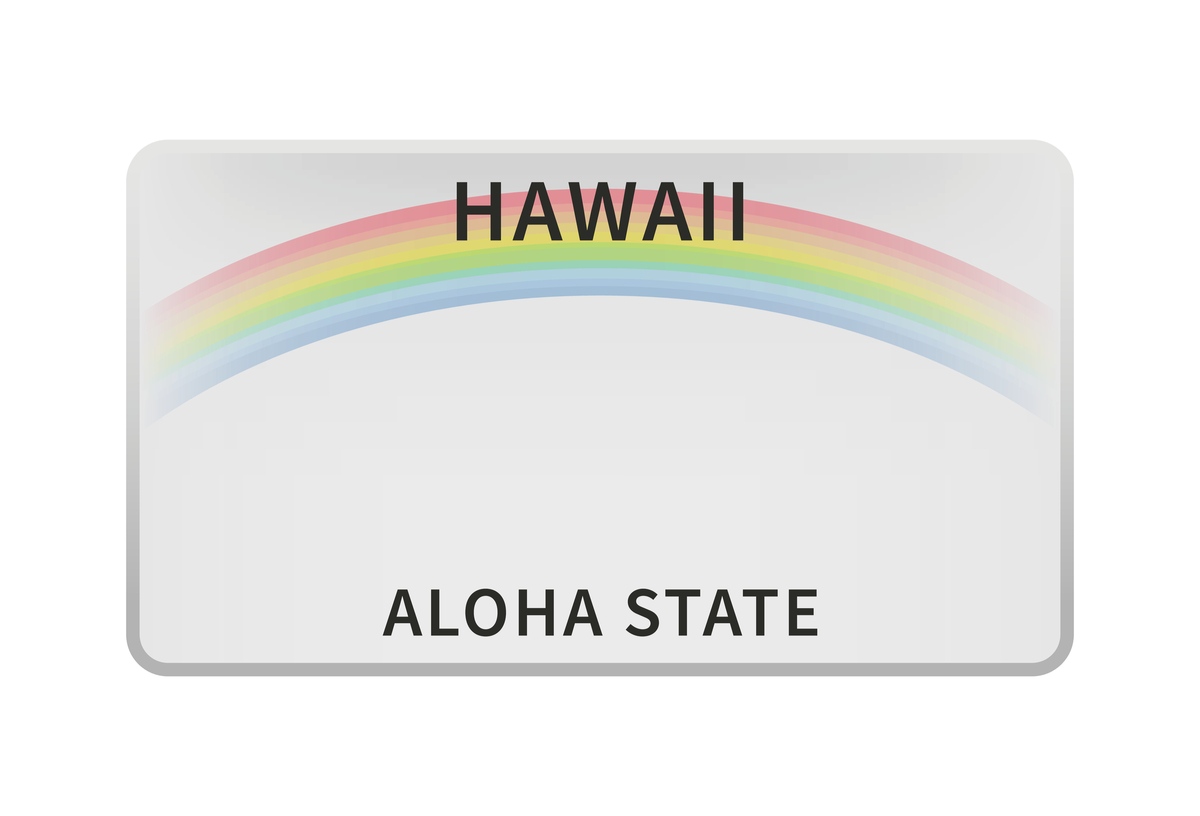 Another item that contains rainbow symbolism is the rainbow flag, also referred to as the pride flag.

The rainbow flag represents the LGBTQIA+ community, pride and equality. The pride flag was created by Gilbert Baker. 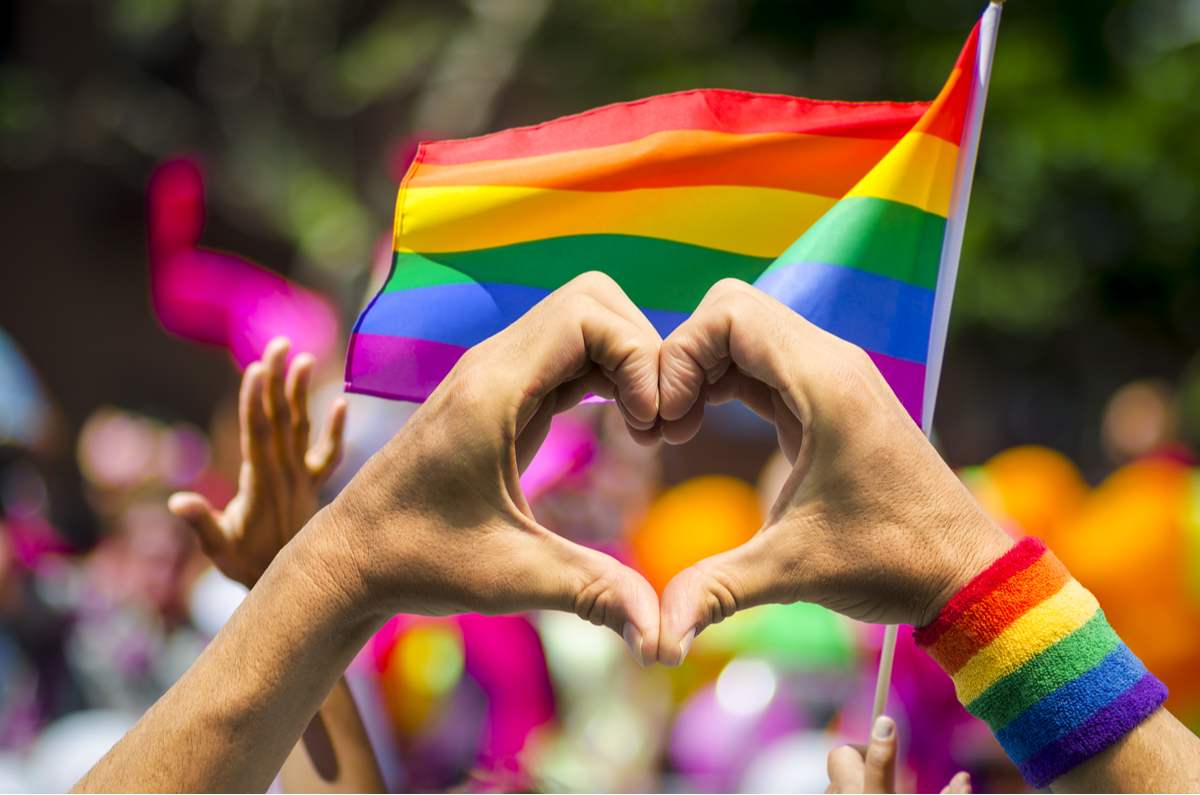 The rainbow flag was first flown in San Francisco during the Gay Freedom Day Parade, on June 25, 1978.

Rainbow symbolism is also found throughout the state of Hawaii. It is the rainbow state, and even has a rainbow on its license plate.

As you’ve learned, there are many different things a rainbow can symbolize, and each meaning is special. It’s no wonder National Find a Rainbow Day exists to celebrate this symbol.

How to celebrate National Find a Rainbow Day

Would you like to celebrate National Find a Rainbow Day in a special way? Try one of these ideas. 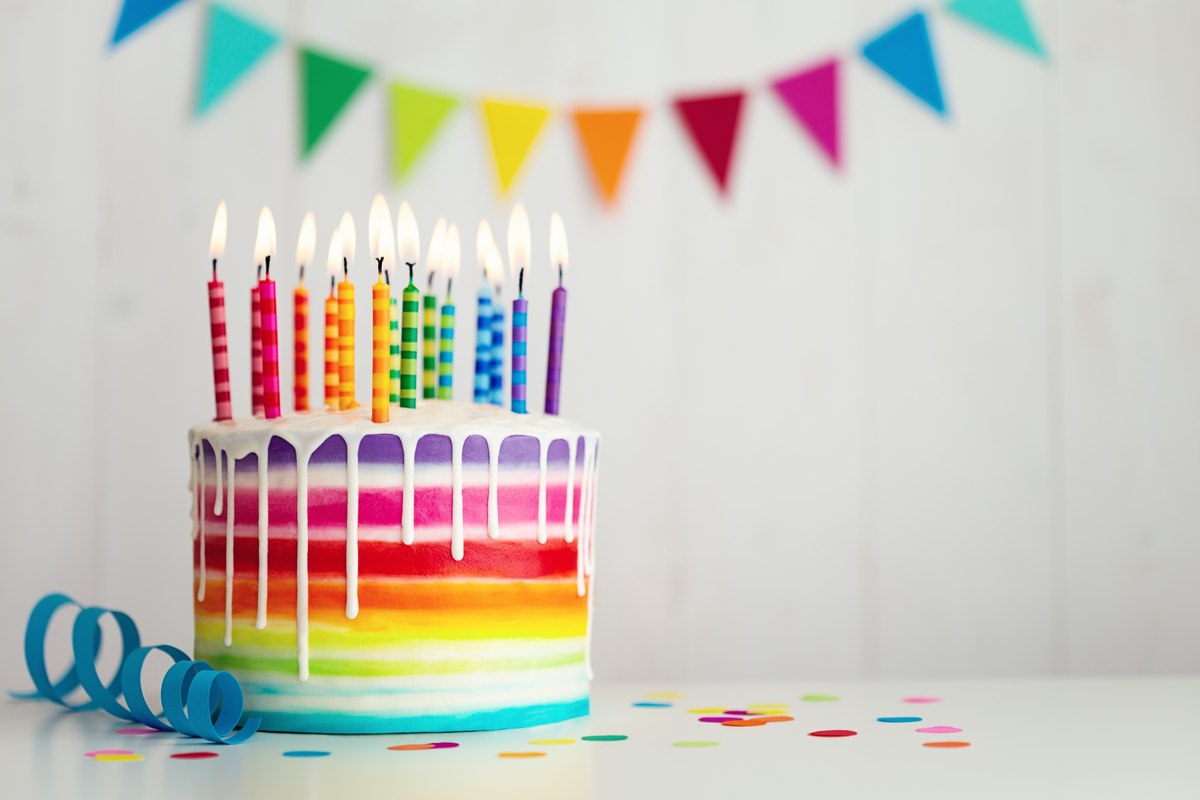 Check out the rainbow coloring sheet at the bottom of this article. After teaching your kids these facts about rainbows, on National Find a Rainbow Day, they can color their own!

If you enjoyed learning about rainbow symbolism for National Find a Rainbow Day don’t forget to share this post with your friends. Here’s a tweet to get you started:

Did you enjoy learning these facts about rainbows for National Find a Rainbow Day? Well you’re in luck, April 3 is host to more than just one national day! 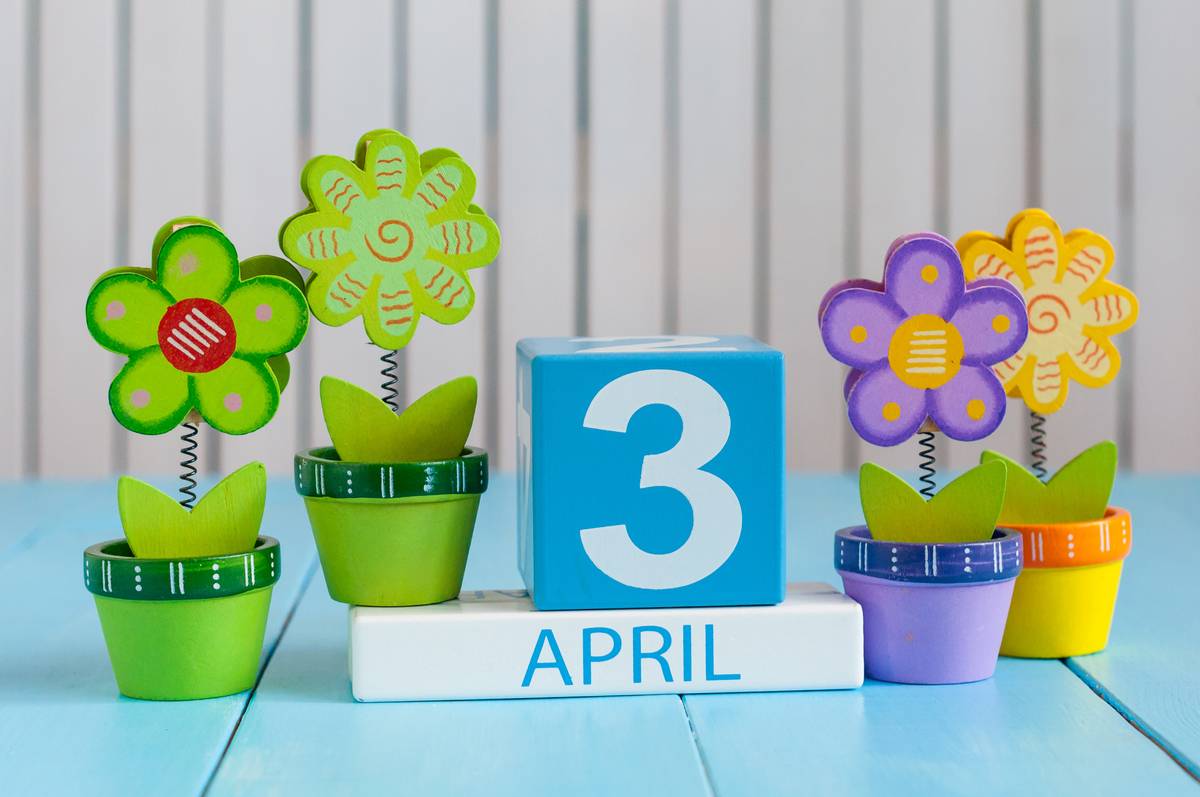 Here is a complete list of all the April 3 national days:

There are close to 2000 national days in the year and over 150 of them are celebrated in April.

To see them all, have a look at this post to discover more about the national days in April. Be sure to also check out the April word search printable of national days. 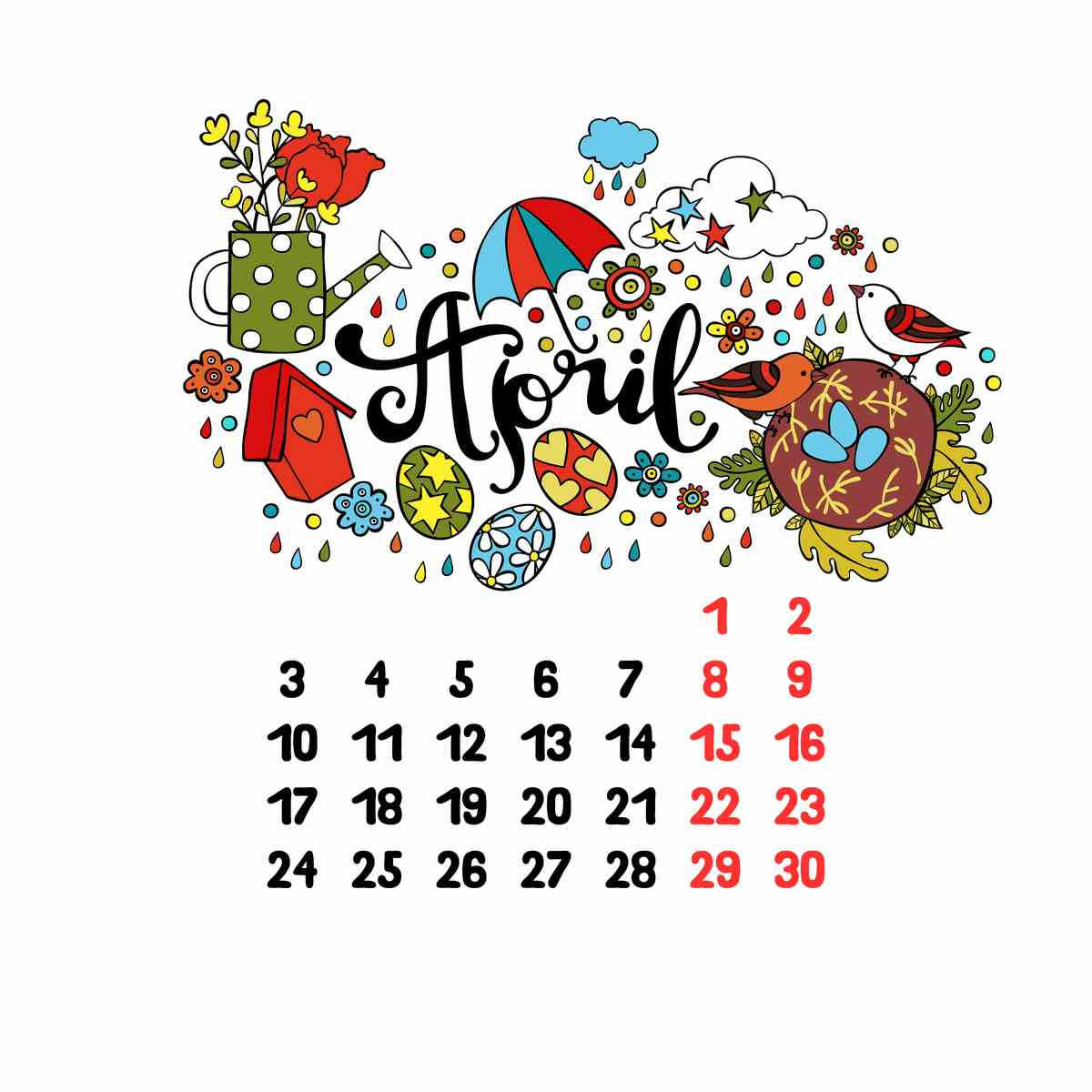 Is food your thing? Each day of the month has a food or drink associated with it, too. You’ll find all the April food holidays here.

Pin this post on National Find a Rainbow Day for later

Would you like a reminder of these rainbow facts National Find a Rainbow Day? Just pin this image to one of your national day boards on Pinterest so that you can easily find it later.

If you are interested in other national days in April, you can watch our video on YouTube. 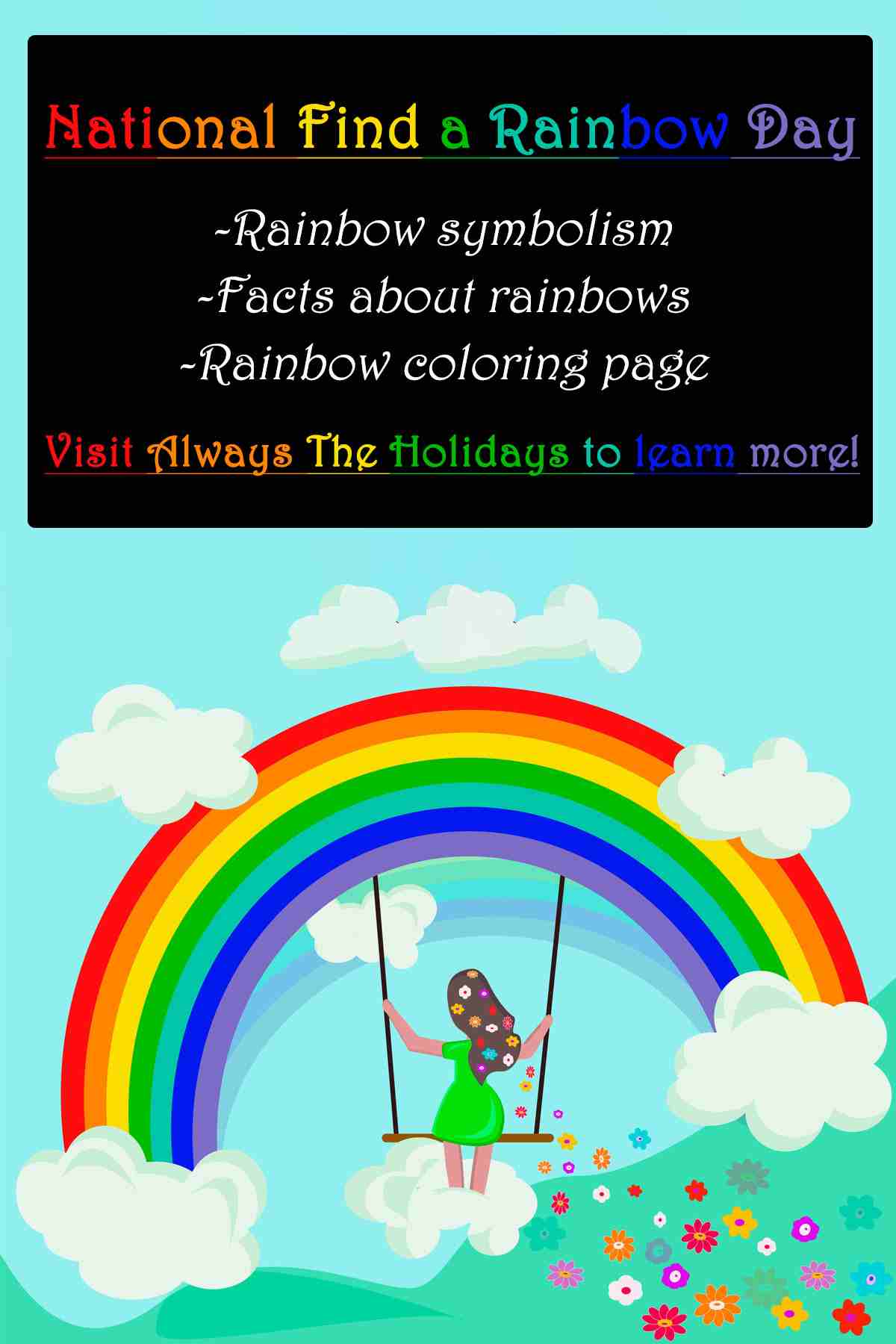 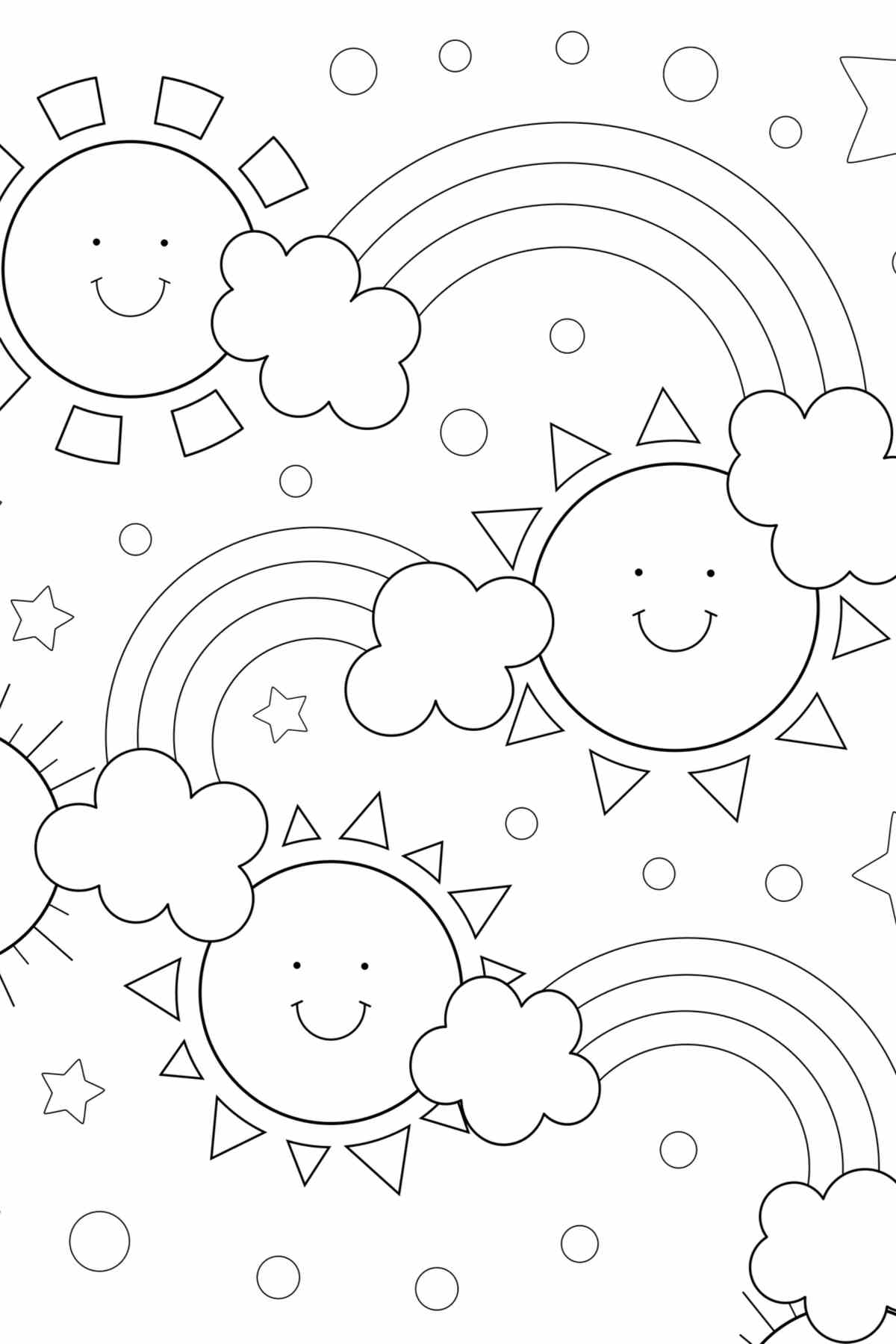 About the authorSince graduating from The University of North Carolina at Greensboro, Jess has been living and working in Los Angeles, CA. She is a freelance writer, specializing in content related to fashion, food and drink and film industry topics. Find out more about Jess here.