Both Ireland and America have played a part in Irish coffee history. There’s even a national day dedicated to Irish coffee called National Irish Coffee Day.

Let’s learn all about what Irish coffee is, why it is important to our history, and where it comes from.

It’s frequently enjoyed on its national day, as well as during the cooler winter months, and during St. Patrick’s Day.

Irish coffee isn’t the only coffee inspired beverage to celebrate each year, be sure to check out National Espresso Day and National Cafe au Lait Day, too. 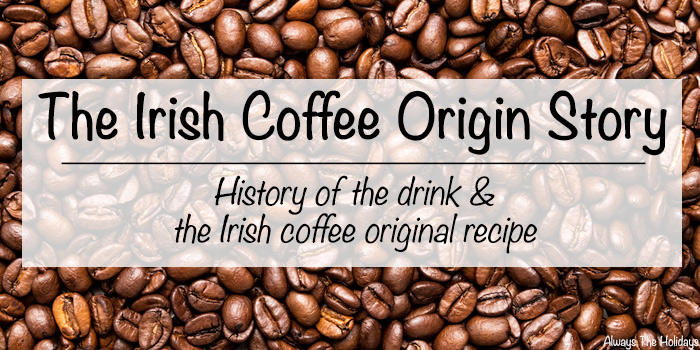 What is Irish coffee?

Irish coffee is a hot, alcoholic beverage. It has four ingredients; coffee, Irish whiskey, brown sugar and whipped cream. It is a great drink to serve on St. Patrick’s Day. 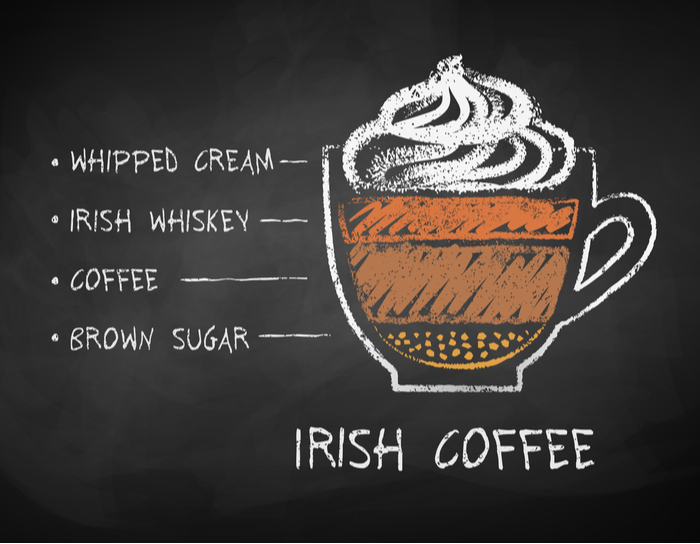 Some versions of Irish coffee include Baileys Irish Cream, but that was not an ingredient used in the Irish coffee original recipe.

Irish coffee would not exist today if it were not for Joe Sheridan, the Foynes Airport in Ireland, and flying boats.

I want to dive in to the Irish coffee origin, but first we have to talk about flying boats. 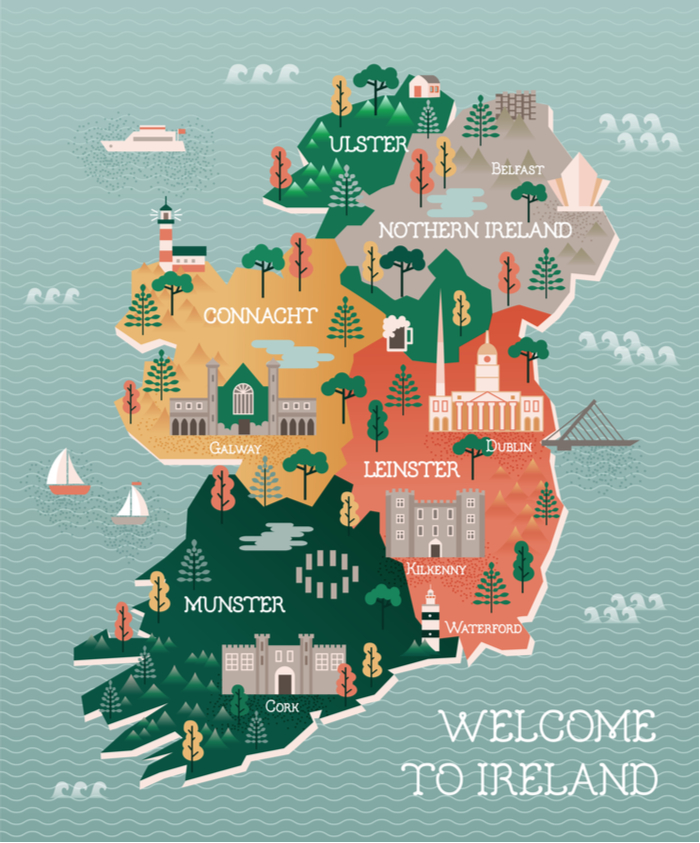 Flying boats were an early model of seaplane used heavily during World War II. They made it possible to have regular travel from Europe to America.

These flying boats would land at the Foynes Airport in Foynes, Ireland to refuel. In 1942, Brendan O’Regan opened a restaurant in the airport and hired an Irish chef named Joe Sheridan.

When O’Regan hired Joe Sheridan there is no way he could have guessed how this decision would impact history, with the invention of Irish coffee.

Why is it called Irish coffee?

One winter night in 1942, a flying boat bound for New York hit a patch weather so dangerous that the pilot decided to turn the plan around and land back in Foynes. 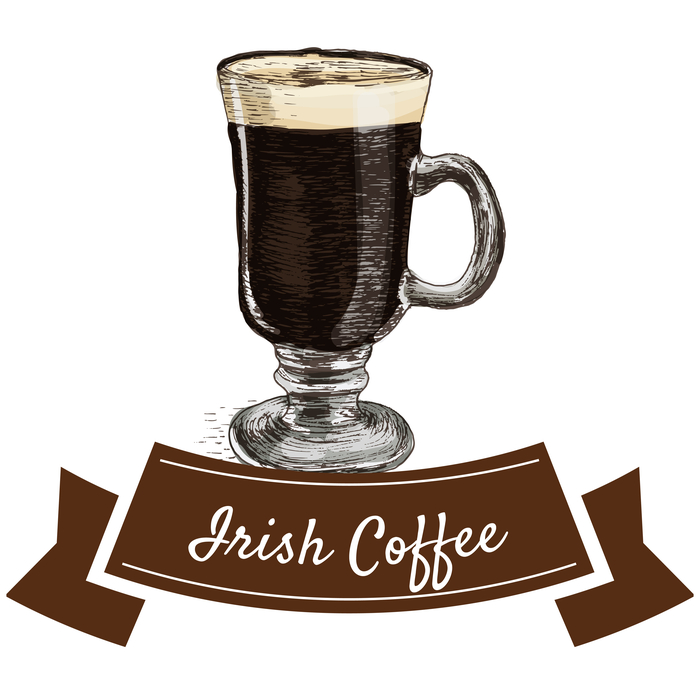 With the weather as miserable as it was, the pilot sent a Morse code message to the airport to inform them of their impending return.

The passengers were instructed to go to Joe Sheridan’s restaurant for food and drink. Sheridan had been experimenting to create a warm, comforting, drink for their return.

When the travelers arrived from the grounded seaplane and stepped into the restaurant Sheridan placed coffee, with good Irish whiskey added to it, in front of them.

They were delighted and one passenger asked Joe Sheridan “is this Brazilian coffee?” to which Sheridan quipped back “No, that’s Irish coffee!”. In that moment, in the spirit of a joke, Irish coffee was born.

Irish coffee history at The Buena Vista – its American debut

The Foynes Airport closed in the fall of 1945. Joe Sheridan and his staff moved to The Rineanna Airport and continued to serve Irish coffee.

The Rineanna is still standing today, but is now referred to as Shannon International Airport.

In 1951, a travel writer named Stan Delaplane tried Irish coffee at The Rineanna and loved it. When he went back to America, he told his friend Jack Koeppler about the drink. 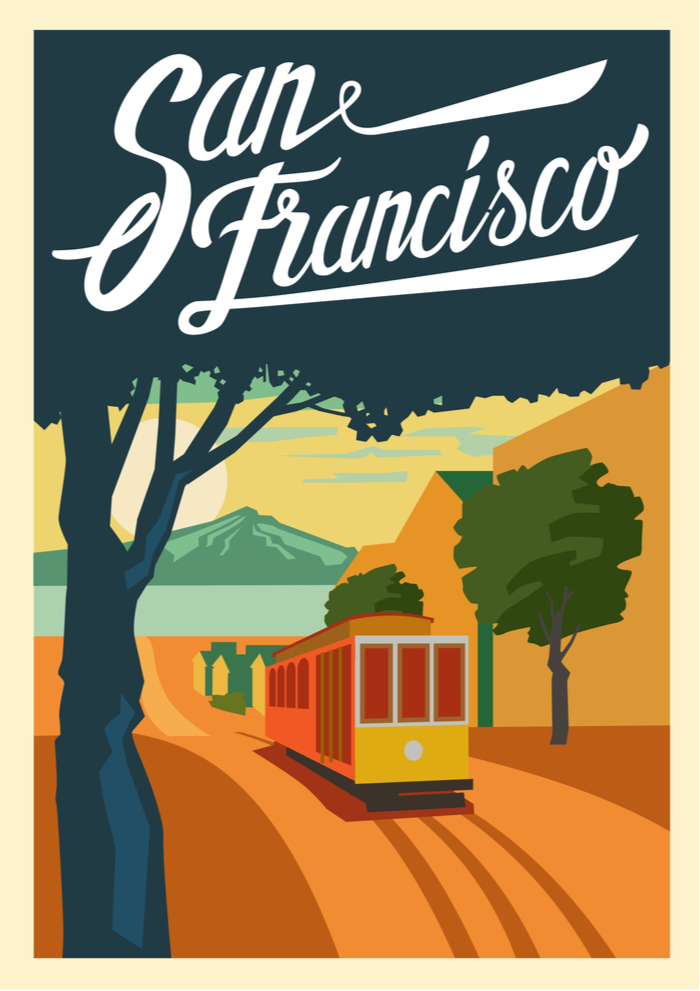 Jack Koeppler owned The Buena Vista restaurant in San Francisco. Together Koeppler and Delaplane tried to recreate the drink but ran into problems with the cream needed to make it.

After experimenting with the drink, and talking to the mayor of San Francisco, (who also happened to be a dairy farmer) they found out the cause of the issue with their cream.

They needed to age the cream for 48 hours and froth it to perfection. When they did that, it solved the problem with their recreation of Sheridan’s drink.

So, who invented Irish coffee? 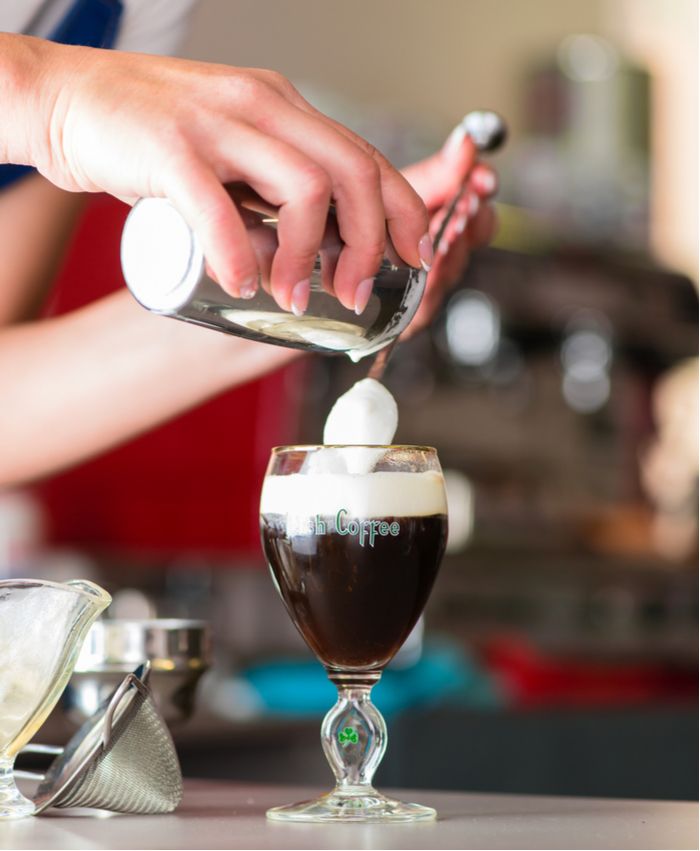 Though some sources credit Jack Koeppler, Stan Delaplane and The Buena Vista with creating Irish coffee, that is not true.

When Sheridan accepted the job offer in 1952 at The Buena Vista, he moved to San Francisco and lived there for the rest of his life.  He died in 1962 and was buried in the nearby Oakland Cemetery.

When Joe Sheridan first served the travelers from the flying boat Irish coffee, he didn’t have any fancy glassware to showcase his drink. 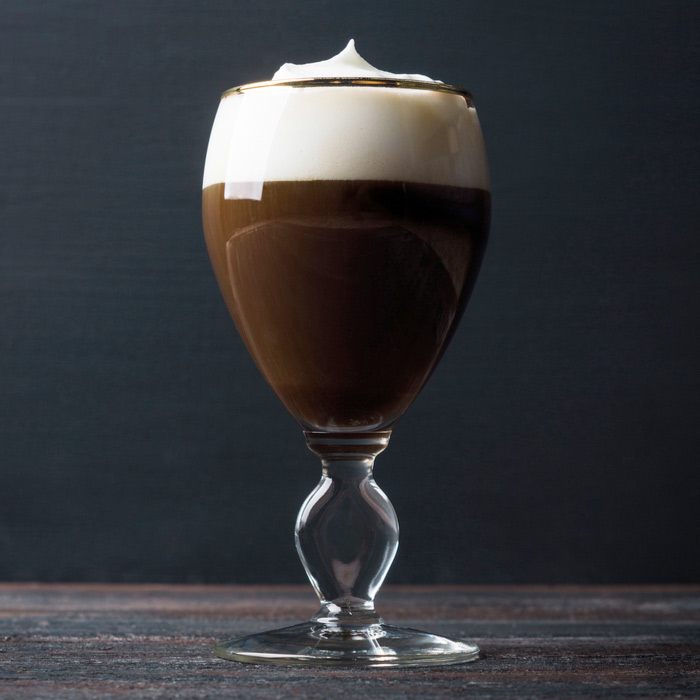 After Irish coffee’s popularity grew for a couple of weeks, Sheridan walked into O’Regan’s office with a stemmed glass, to show his boss.

O’Regan loved the glass, and that style of glassware became the traditional Irish coffee glass.

This stemmed glass is thought of as the “original” Irish coffee glass, because from that point on, it was used specifically for that drink.

There are only four ingredients in the Irish coffee original recipe. They are coffee, brown sugar, cream and Irish whiskey! 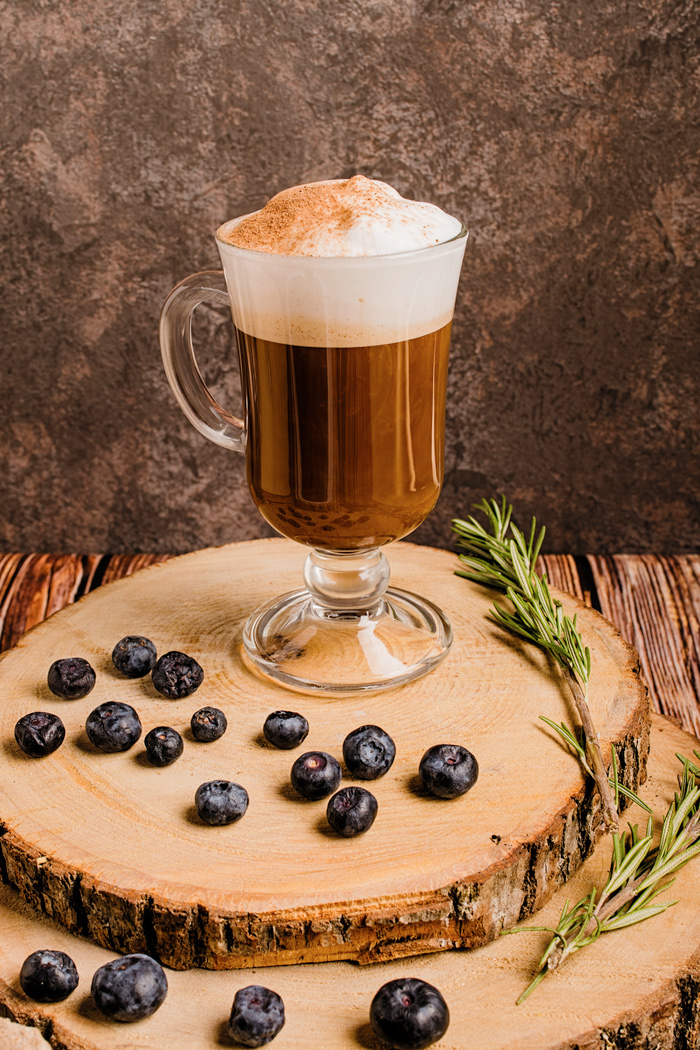 While the taste of Irish coffee is complex, the drink itself is quick and easy to make. I’ve included a printable recipe card at the bottom of this post so you can try making it yourself.

A frequently asked question about Irish coffee is “what is the best whiskey for Irish coffee?”.

I recommend a good quality Irish whiskey! It’s the most authentic choice, as the drink was created in Ireland, and is very tasty.

Let me know what you think of the Irish coffee original recipe, in the comments section, if you try it!

Fun facts about the origin of Irish coffee

Brush up on your knowledge of the origin of Irish coffee with these fun facts. Some may surprise you! 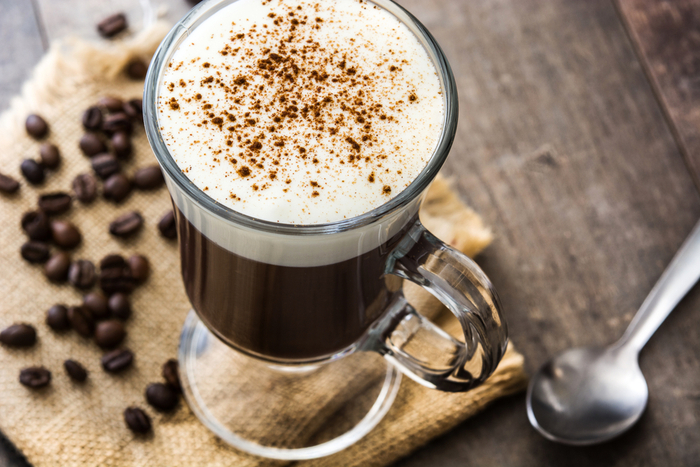 If you enjoyed reading facts about the Irish coffee origin, be sure to also check out these posts to learn more historical fun facts! 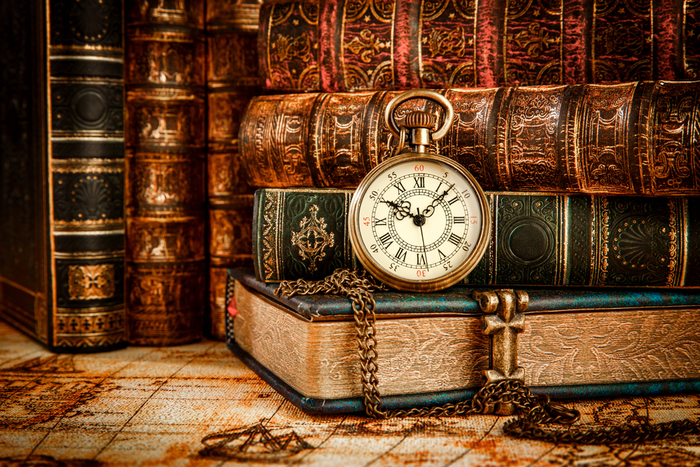 Pin this post about the Irish coffee origin story for later

Would you like a reminder of this post about the Irish coffee origin story? Just pin this image to one of your drinks boards on Pinterest so that you can easily find it later. 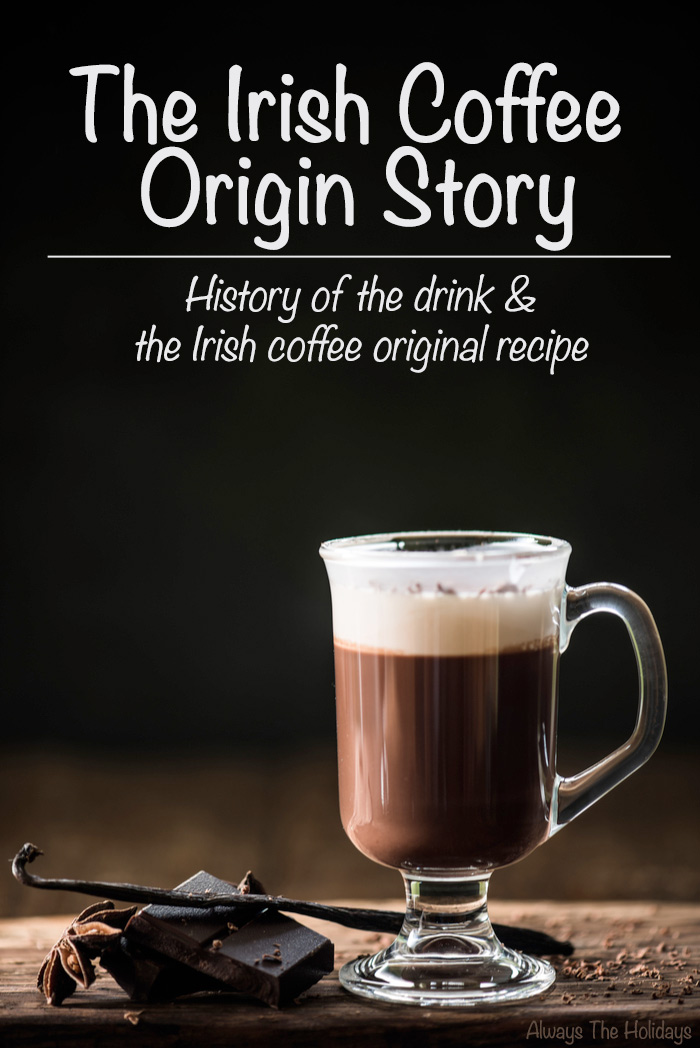