It is an annual celebration, observed on November 5, in the UK and a few other places.

The day is celebrated with bonfires, effigy burning fireworks and lots of singing. Read on to learn more about this historic day and get a fun coloring sheet. 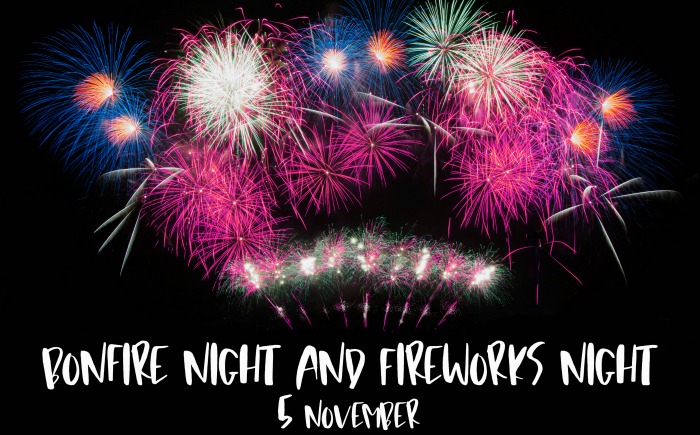 History of the Gunpowder Plot – Bonfire Night and Firework Night

The history of the celebration began in 1605, when Guy Fawkes was arrested for guarding explosives that his group, known as the “Gunpowder Plot,” had placed beneath the House of Lords. 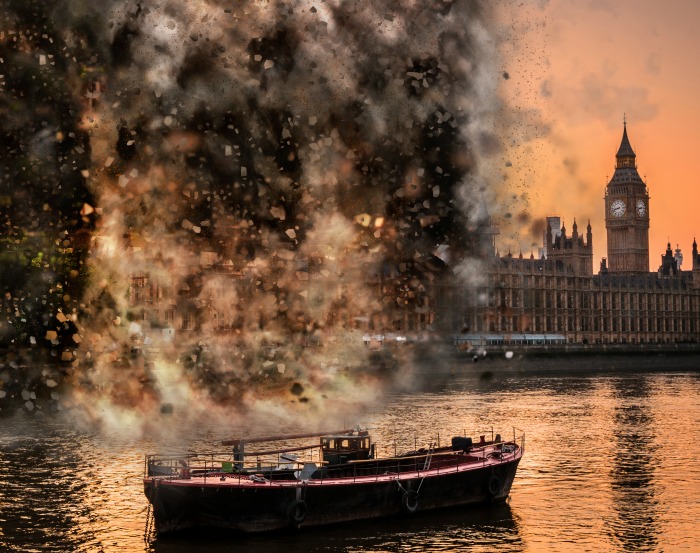 Fortunately, the plot to detonate the explosives failed because one of the conspirators sent his cousin a letter warning him not to visit the Houses of Parliament.

After the conspiracy failed, the people of England were relieved that King James I had survived an attempt on his life, so they lit bonfires around London.

Months later the Observance of 5th November Act was enforced as an annual day of thanksgiving for the plot’s failure.

If you enjoyed reading about Guy Fawkes and Bonfire Night, be sure to share this post with a friend. Here is a tweet to get you started:

It's time to set off some fireworks and have a bonfire. Today is Guy Fawkes Day. Find out all about it on Always The Holidays. 🎆🎇🧨🍸🥂 Click To Tweet

Who is Guy Fawkes?

Guy Fawkes was one of several Catholic conspirators in the infamous Gunpowder Plot. He was not the ringleader himself, but is the best known member of the group.

He was born in January of 1606 and is also known as Guido Fawkes. 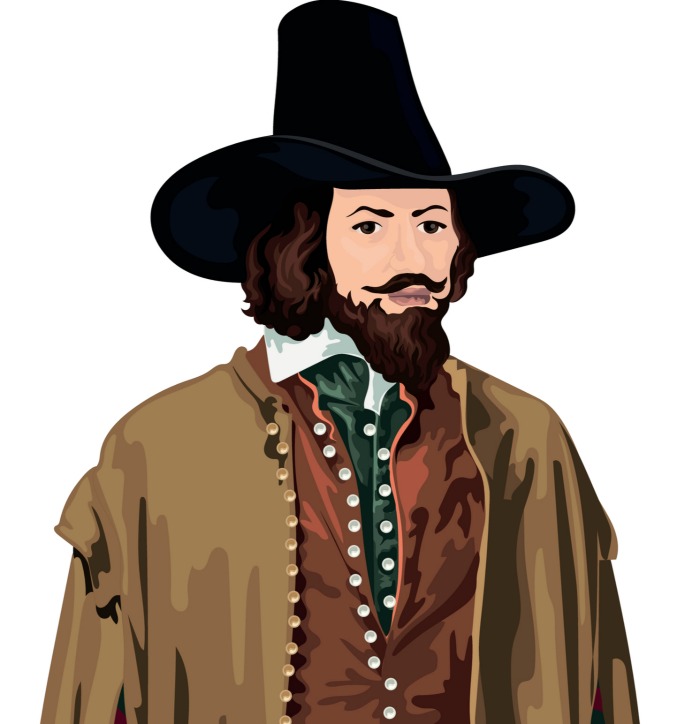 Fawkes was supposed to have been the person to light the fuse on 36 barrels of gunpowder, but was caught just before doing so.

There is dispute, today, whether he should be considered a terrorist or a freedom fighter.

Where is Guy Fawkes Day celebrated?

Today, the infamous plot continues to be remembered through the use of fireworks, bonfire parties and general celebrations. There is a lot of enthusiasm for the day in the countries that celebrate it. 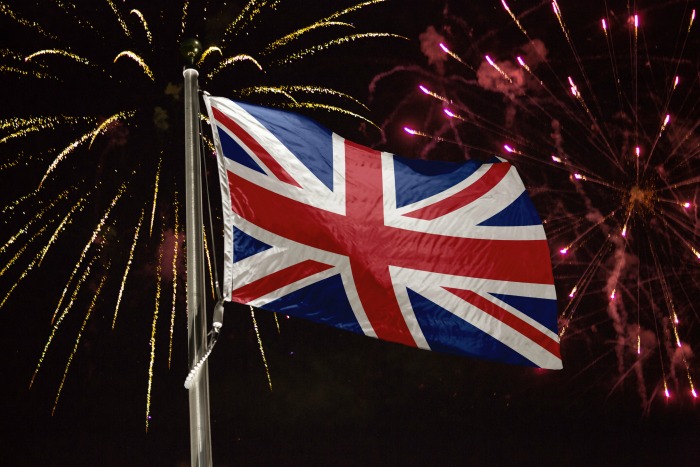 Traditionally, this is an English celebration, but New Zealand is also a country where it is common to see celebrations honoring the day.

Other names for Guy Fawkes Day are Bonny Day, Cracker Day (for firecrackers) and Bonfire Day.

What foods do you eat on Guy Fawkes Day?

While Guy Fawkes Day is generally marked by memories of the gun powder Guy Fawkes hid in the basement of Parliament, there are also some foods that are associated with the day.

One of these is Parkin Cake, a Yorkshire version of gingerbread. It is a sticky cake which contains oatmeal, ginger, treacle and syrup. 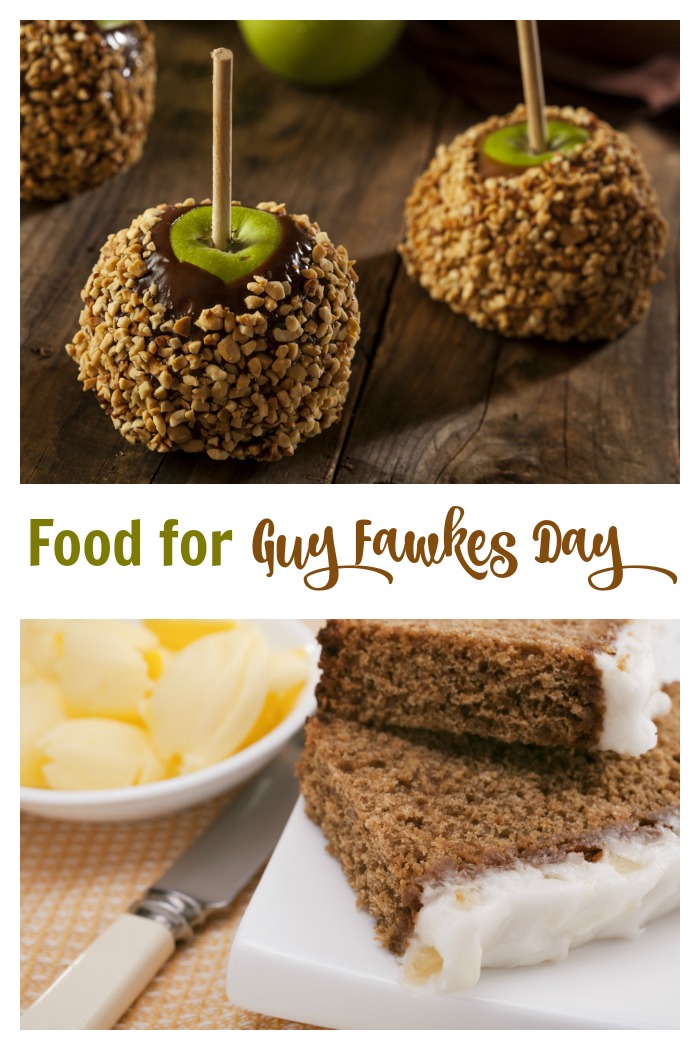 Other foods commonly eaten on the day go along with the celebrations, such as foods that can be cooked over an open flame. Barbecued sausages and marshmallows toasted in a bonfire are two.

A few other popular foods eaten this day include caramel apples, bonfire toffee and potatoes that can be baked in the ashes of a bonfire.

No Guy Fawkes night would be complete without treacle toffee – also known as plot toffee. Treacle toffee can be made but caution should be taken. The toffee needs to reach a very high temperatures, and a good thermometer is required.

Mulled wine is commonly drunk to celebrate the occasion. This brew keeps one warm on cold autumn nights and makes the evening feel festive.

Why did Guy Fawkes wear a mask?

The traditional Guy Fawkes mask is meant to be a depiction of the man himself – Guy Fawkes, the best known member of the nefarious gunpowder plot.

A Guy Fawkes mask is normally black or white with painted on moustaches, goatees and eyebrows. It has  a sinister look to it that goes along with the somber day. 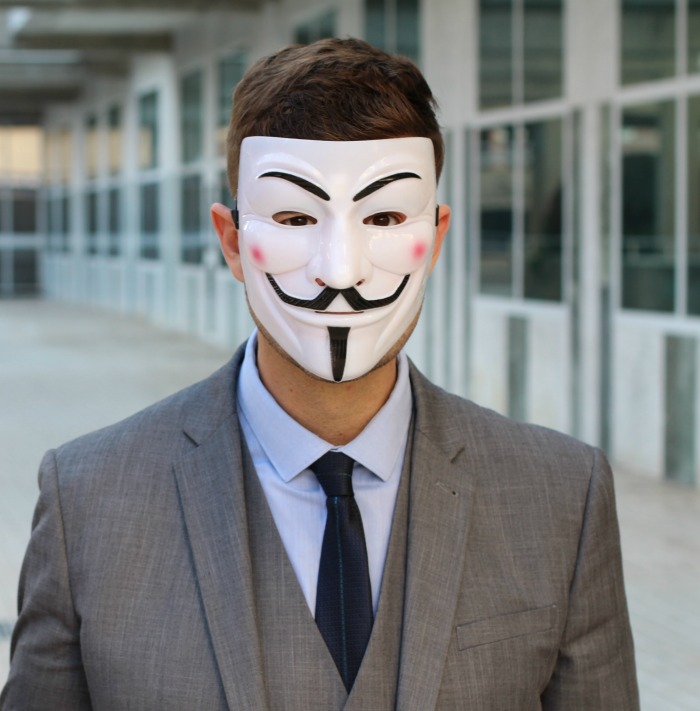 Today, a popular name of the mask is the Anonymous mask.

Guy Fawkes Day is not the only holiday we celebrate by wearing masks. Some other holidays where masks are worn are Mardi Gras, Halloween and Samhain.

How is Guy Fawkes Day celebrated?

From lighting bonfires to shooting off fireworks and burning effigies of politicians, there are many Guy Fawkes Day traditions. As is normal in any celebrations, there is usually a copious amount of alcohol consumed on this day as well.

Since Guy Fawkes day comes at the end of autumn, having bonfires as part of the celebrations also allows people to burn their garden refuse.

Some people light bonfires in their own gardens and larger celebrations will use a communal space. In the UK, some towns even organize public bonfires. 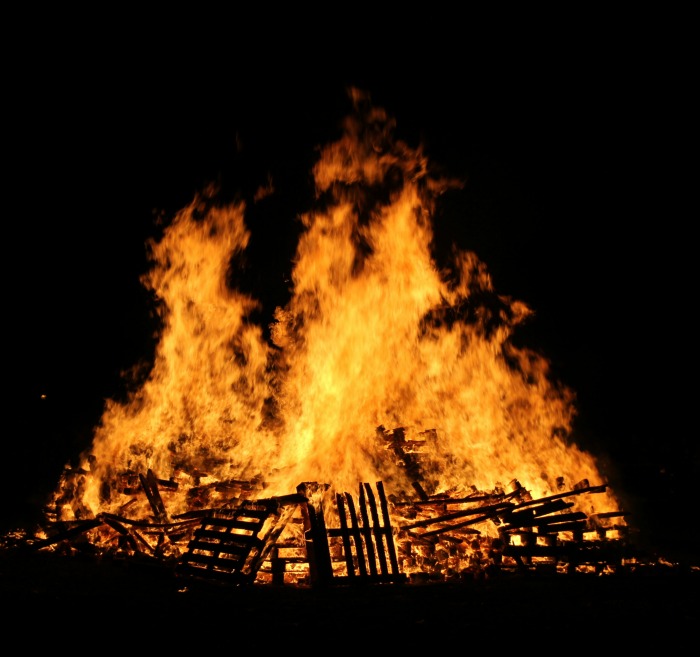 With Halloween coming just a few days before Guy Fawkes night, combined parties are often the norm. Parties like this will often include elements from both holidays, such as a bonfire as well as dressing up in Halloween costumes.

If you plan to have bonfires as part of your Guy Fawkes Day celebrations, be sure to surround the bonfire area with bricks to stop the fire from spreading and consult your local regulations.

Samhain is another historic holiday that is celebrated with community fires and is related to the spirituality behind Halloween. Check out this post to learn more about the meaning of Halloween.

One of the most popular ways to celebrate Guy Fawkes day is watching or setting off fireworks.

Most communities in the UK have some kind of public firework display around the time of November 5. If you are in the UK at this time of the year, be sure to ask a local about bonfire night or firework night.

Many people purchase and light fireworks at night in celebration of Guy Fawkes Day. This, of course, comes with its own set of problems and can result in accidents.

Many safety activists call for the sale of fireworks to the public to be restricted even more around Guy Fawkes Day or for the displays to be organized by professionals.

If you do purchase and set off fireworks, be sure to adhere to the regulations in your area. 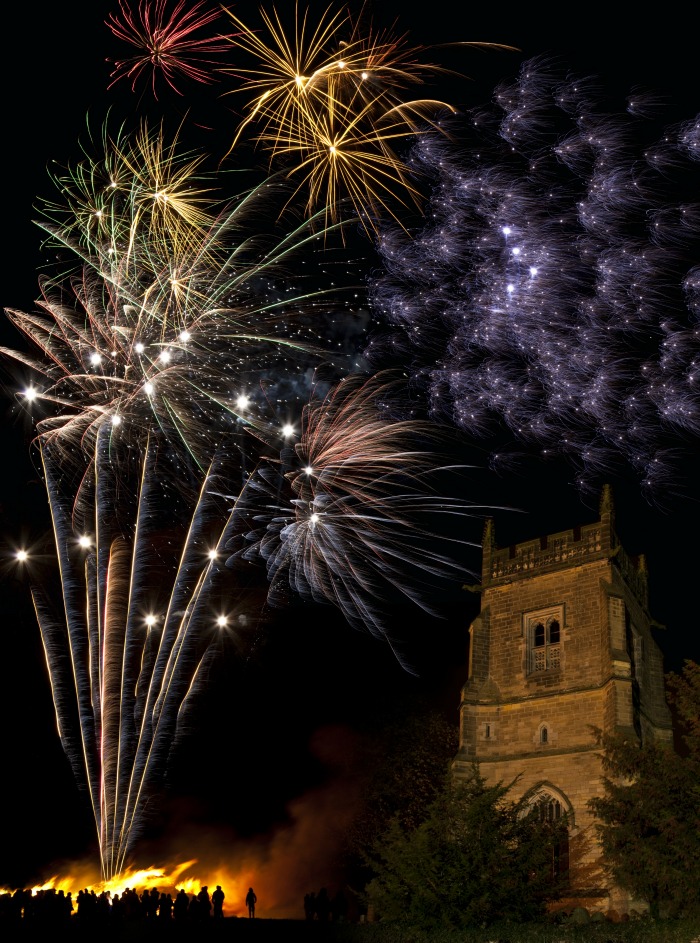 An effigy is a small figure of a person that is burned. This is done to remember this day in history when Parliament was almost destroyed.

Vendors even have effigies that can be purchased for burning. This tradition is very popular in England. 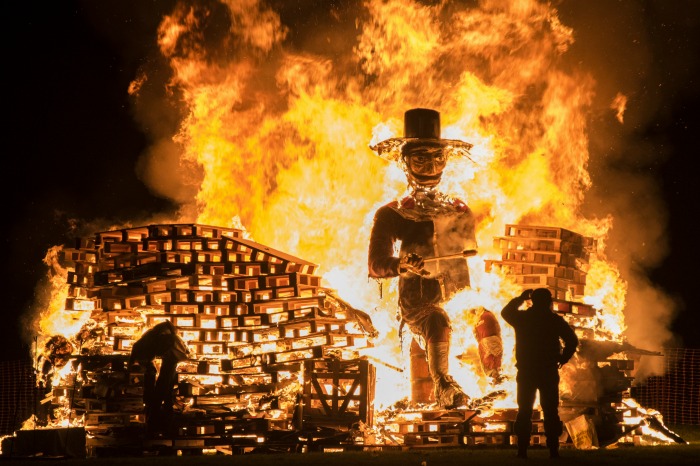 It is not uncommon to witness the burning of effigies of politicians on Guy Fawkes Day.

Even though the day is not celebrated as a rule in the US, whenever we see a group fighting for their political or social rights, it is common to see people donning Guy Fawkes masks along with burning effigies.

Although Fawkes was originally seen as a traitor, he is now viewed as a sort of revolutionary hero by many people.

There is a poem that goes along with Guy Fawkes Day. If you are near any place where celebrations for the day are happening, it’s usual to hear the words being sung.

Remember, remember, the 5th of November
The Gunpowder Treason and plot;
I know of no reason why Gunpowder Treason
Should ever be forgot.
Guy Fawkes, Guy Fawkes,
‘Twas his intent.
To blow up the King and the Parliament.
Three score barrels of powder below.
Poor old England to overthrow.
By God’s providence he was catch’d,
With a dark lantern and burning match.

Even four hundred years on, Bonfire Night is really an excuse to have a firecracker of a party!

Copious amounts of alcohol and the foods listed above are in abundance for these festivities! 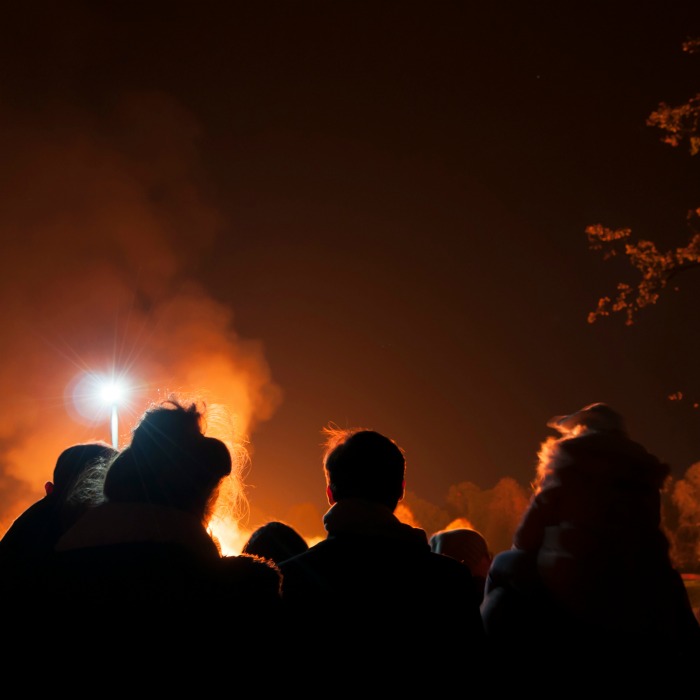 The BBC even has an interactive game, called the Gunpowder Plot Game, which will test your knowledge of history the day. This game is fun for history buffs and novices alike.

Have you ever been to a Guy Fawkes party?  Please leave your comments below.

Pin this post about the history of Guy Fawkes Day for later.

Would you like a reminder of this post about bonfire night? Just pin this image to one of your trivia boards on Pinterest so that you will easily be able to find it later. 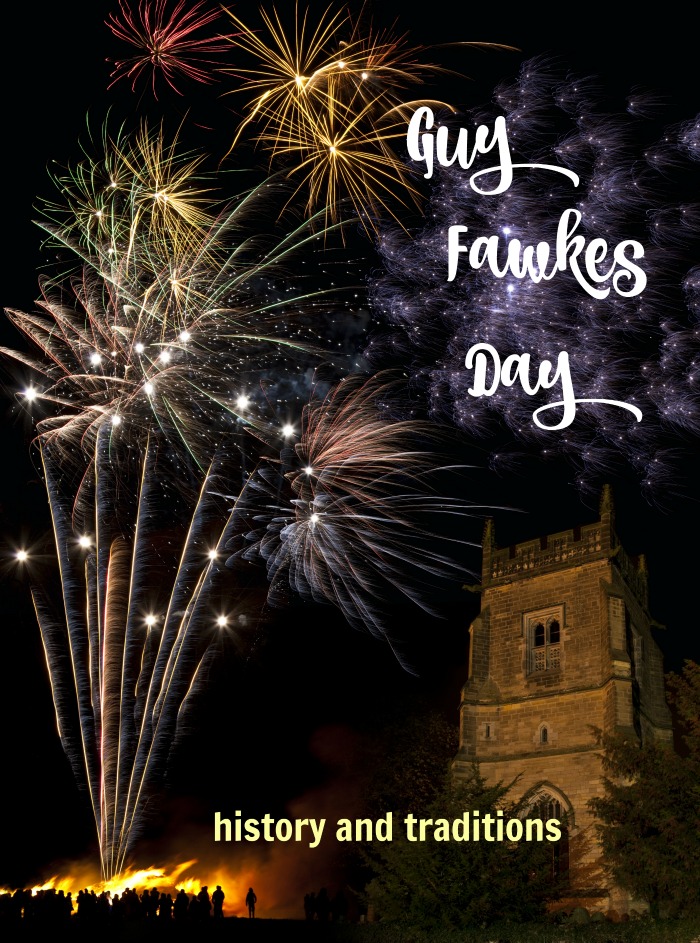 Admin note: this post for Guy Fawkes Day first appeared on the blog in yada. I have updated the post to add a coloring sheet, and a video for you to enjoy.

Other interesting days November are:

If you love to do puzzles, head on over to get my free  printable word search for the national days in November. The kids will love it too.

Express yourself creatively to celebrate Guy Fawkes day with this fun coloring sheet.

Admin note: this post for yada first appeared on the blog in yada. I have updated the post to add all new photos, and a video for you to enjoy. 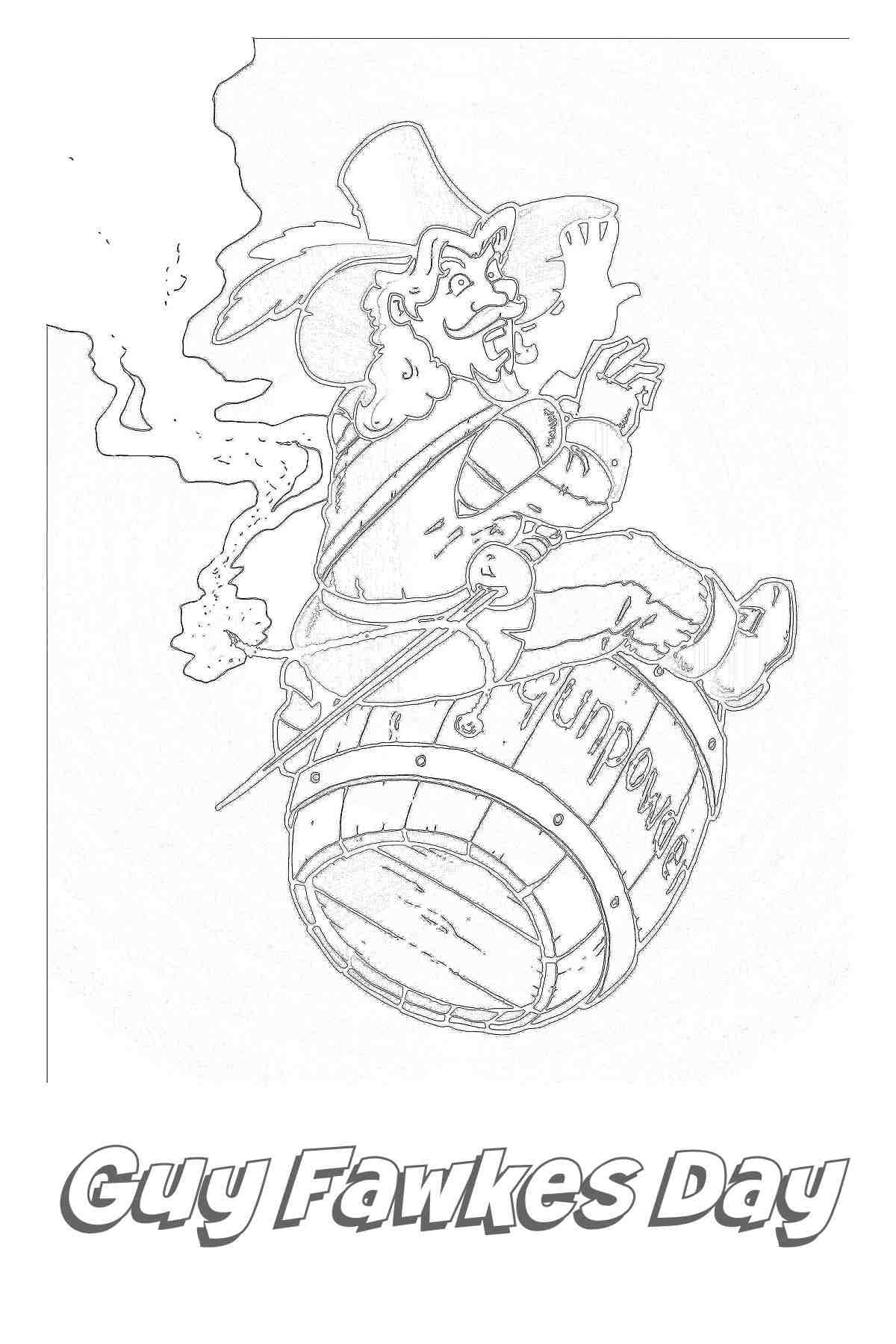