February 2 is recognized as National Groundhog Day and celebrated through out the country as a fun way to predict spring. Each year, millions of people await the prediction from Punxsutawney Phil to learn how long our winter will last.

Are you curious about what a national day is? Find out all about these special days in this national days guide.

It is fun to discover more about unusual animals, like the groundhog, by giving them national days so we can honor them. Check out National Ferret Day for another fun national animal day. That day is a national day celebrated in April.

Much of the country is covered in snow in early February, and many people have had enough of winter. It is no wonder that a common question on National Groundhog Day is “will the groundhog see his shadow at Gobbler’s Knob on February 2?” 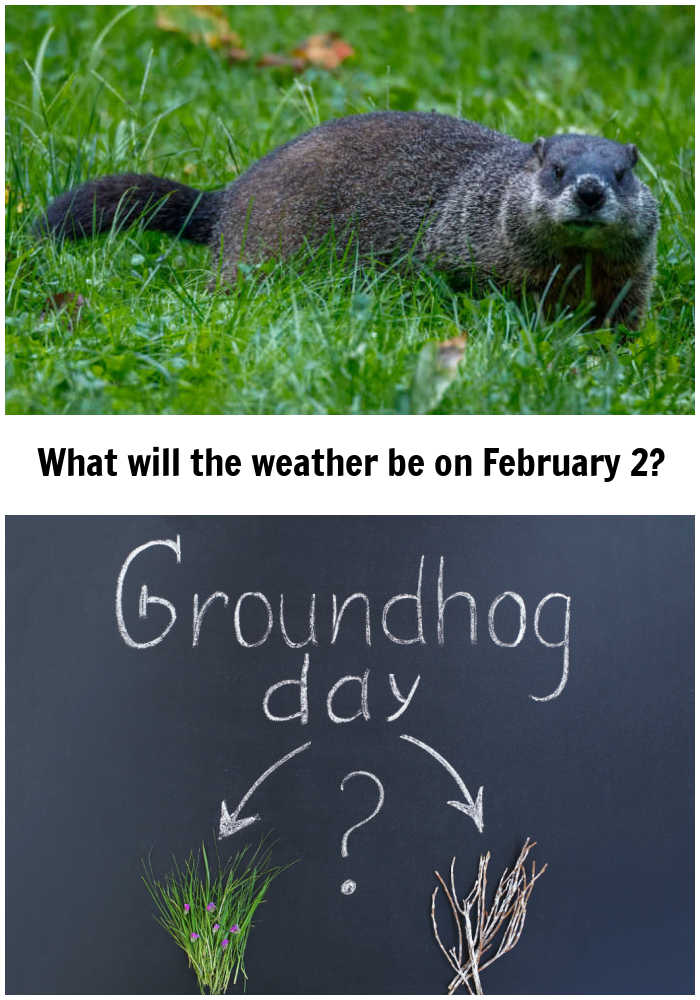 It's time to find out what Punxsutawney Phil decides about spring at Gobbler's Knob. Today is National Groundhog Day! Will we get 6 more weeks of winter or not? #groundhogday #nationaldays #weather 🌤❄ Click To Tweet

What does it mean if the groundhog sees his shadow on National Groundhog Day?

According to folklore, the groundhog is seen as a sort of weather predictor on February 2 each year.

Tradition tells us that, if the day is a sunny one and the groundhog sees his shadow, he will be scared and will retreat back into his burrow. This means that winter weather will last at least another six weeks.

On the other hand, if the day is cloudy when the groundhog emerges from his burrow, this means that he will come out to stay, and spring will be early that year.

Anyone who loves to garden, like us, will be cheering for Phil to come out of his burrow to very cloudy skies. Are you ready for spring so that you can get out in the garden? 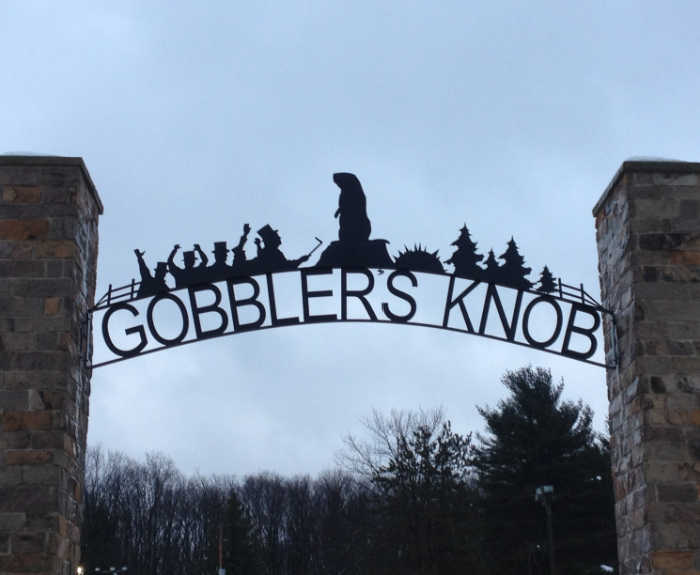 Although several states have adopted their own groundhog for this day, the official groundhog is thought to be Punxsutawney Phil, who lives at Gobbler’s Knob near Punxsutawney, Pennsylvania.

Thousands of people have visited the town over the years to take part in the various groundhog festivities that take place there on February 2. 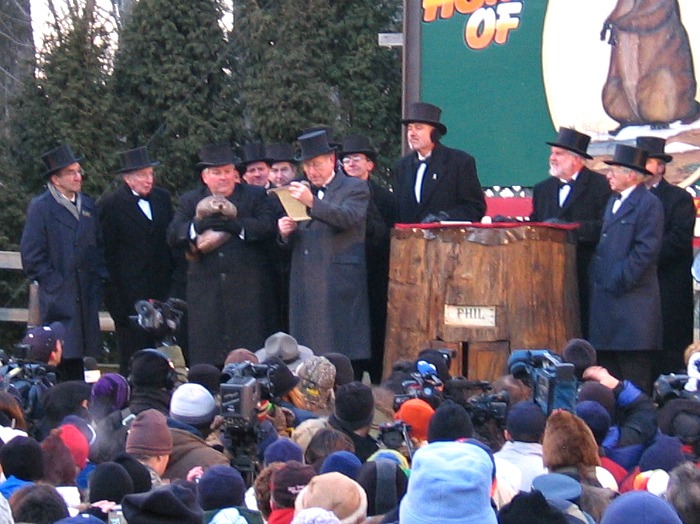 In Punxsutawney, Pennsylvania, modern customs involve early morning celebrations to watch the groundhog emerge from its burrow. There are also other day long festivities happening, as well.

This year marks the 137th trek to Punxsutawney, Pa for the festivities, which makes Phil quite an old groundhog!

The activities include lots of food being served, with skits and plays being performed. Of course, Phil the groundhog is presented to the crowd as the weather is predicted. 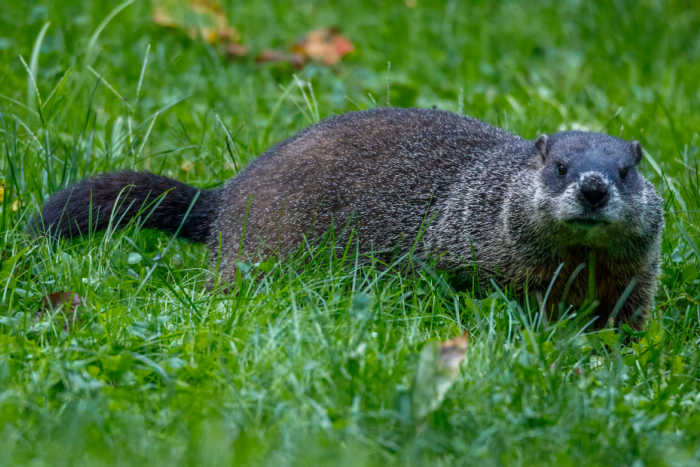 Did your parents ever talk about Groundhog Day when you were growing up?

Murray played the part of a weatherman, covering Groundhog Day festivities in PA., who found himself in a time loop where the same day was repeated over and over.

The history of Groundhog Day

The tradition of National Groundhog Day dates back to the arrival of early German settlers in Pennsylvania. They had a tradition that predicted if the sun was shining on Candlemas Day (February 2) – the snow would still be falling in May.

Some early settlers even adopted groundhogs, which were plentiful in the area at this time, as harbingers of the weather. This poem tells us of the tradition:

If Candlemas be fair and bright,
Winter has another flight.
If Candlemas brings clouds and rain,
Winter will not come again. 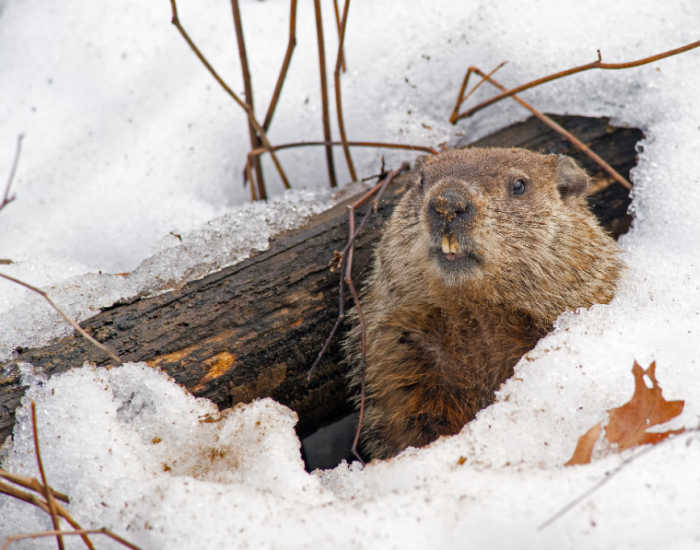 The weather prediction for February 2, 2023 in Punxsutawney, PA calls for snow flurries and snow showers and a high of 31° F. This means that we will have to wait to see if Phil sees his shadow!

Since Phil doesn’t always do what the weather man says he’ll likely do, who knows whether he will see his shadow on National Groundhog Day or not? 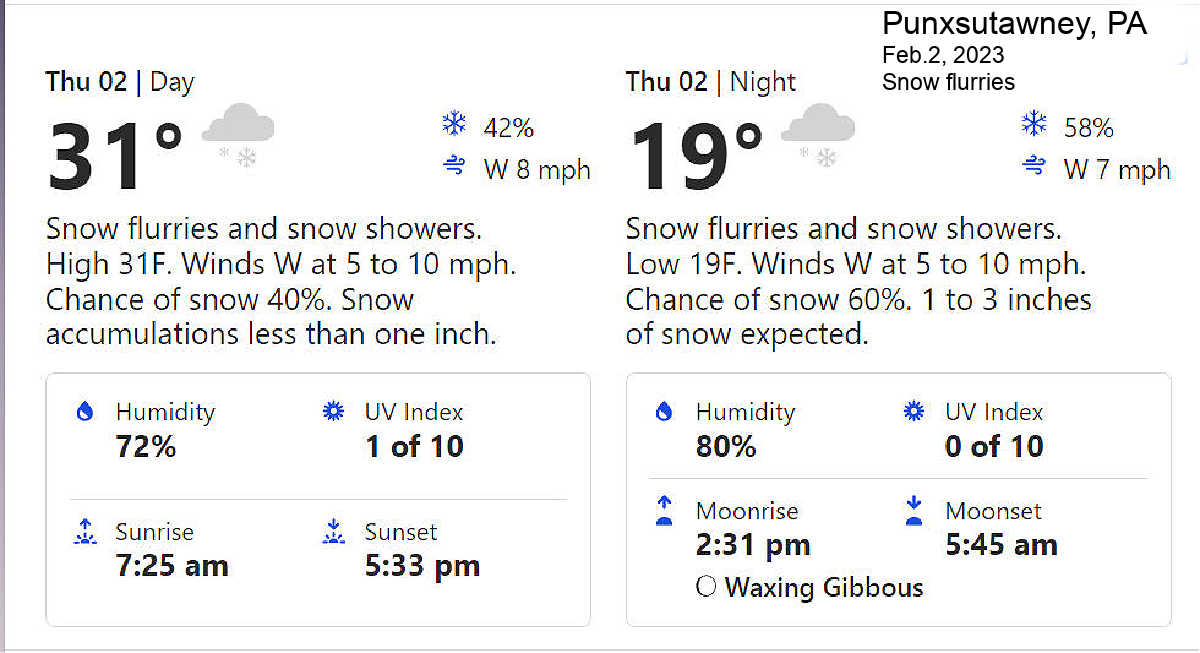 Movies and books about Groundhog Day

Watching movies and reading books about Groundhog Day is a relaxing and fun way to spend a cold winter day indoors.

There are lots of versions of Groundhog Day movies to choose from. You can also pick books for adults or for children. Even Groundhog day coloring books have been produced.

Other fun facts about Punxsutawney Phil, the groundhog

There are lots of fun facts associated with Punxsutawney Phil. Including, when Phil decided during the prohibition years, that there would be 60 more weeks of winter if he were not allowed a drink!

Brush up on your knowledge of the world’s most famous groundhog with these other Groundhog Day facts. 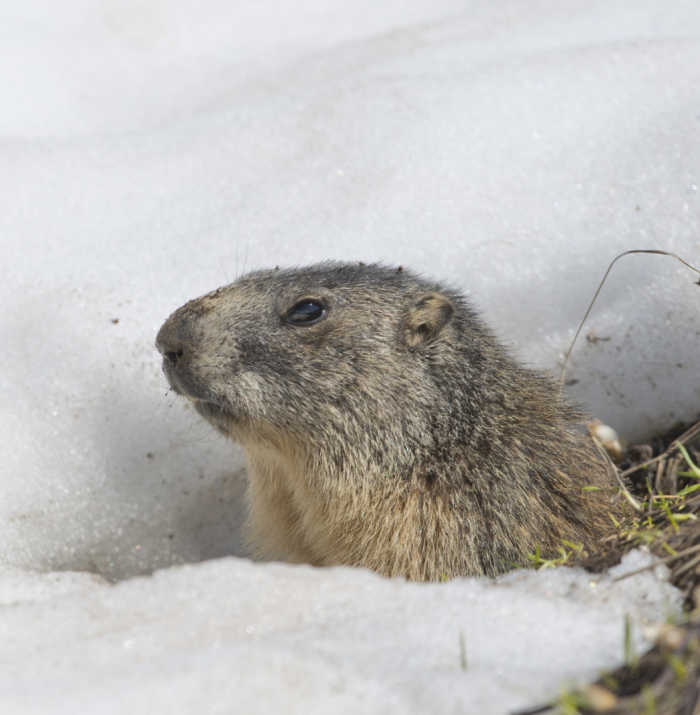 How many times has the groundhog been right in predicting the weather?

Various reports say that Phil is correct about 47% of the time. So, we might be as lucky finding out when spring will come by flipping a coin, but a groundhog sure is a cuter way to predict spring!

Some reports, such as those from Stormfax Almanac are as low as 39% accuracy. 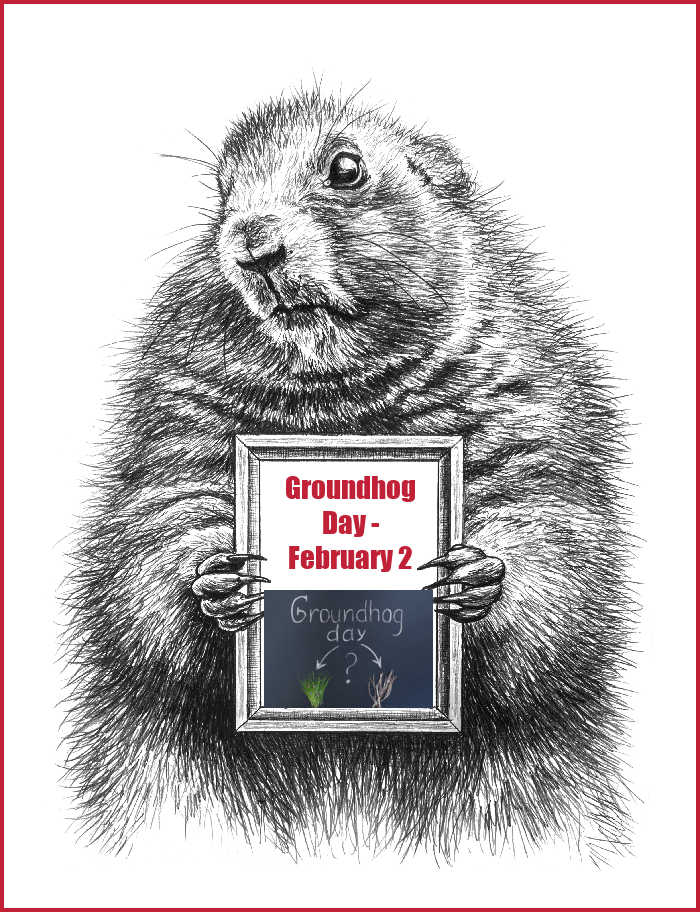 Visit PA has a live stream where you can watch the day’s proceedings, Phil’s arrival and more. If you can’t go in person to the event, watching the stream is a fun way to keep updated.

Check out the live stream for Punxsutawney Phil’s forecast here.

Would you like to celebrate this Groundhog Day in a special way? Try one of these ideas.

Pin this post about National Groundhog Day for later

Would you like a reminder of this post for about Punxsutawney Phil? Just pin this image to one of your holiday boards on Pinterest so that you can easily find it later. 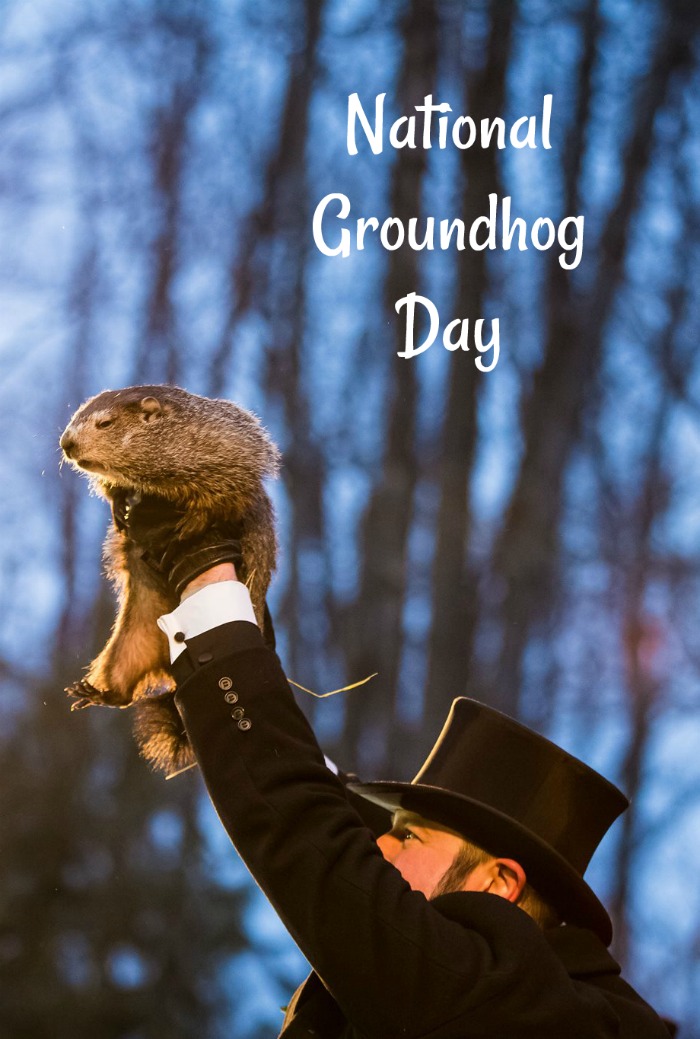 Be sure to check out this post to discover more about the national days in February.

Admin note: This post first appeared on the blog in February of 2017. I have updated the post to add new photos, a printable coloring sheet, additional facts about Punxsutawney Phil and a video for you to enjoy.

Looking for an activity to do for Groundhog Day? Why not get in some adult coloring with this fun printable of a groundhog ready for spring?