As Christmas is quickly approaching, it’s the perfect time to talk about poinsettias. Let’s celebrate this beautiful plant by learning facts about poinsettias, and discovering more about the history, origin and symbolism and meaning of the poinsettia.

During this time of the year, poinsettias are all around! They’re featured on Christmas cards, painted on ornaments, displayed on dinner tables, and found adorning front porches along with other festive decorations.

Each of the plants associated with Christmas hold a significance to the holiday deeply rooted in history, and poinsettias are no different.

Make sure you check out our posts on the traditions of Christmas greenery and the history of mistletoe if this topic interests you. 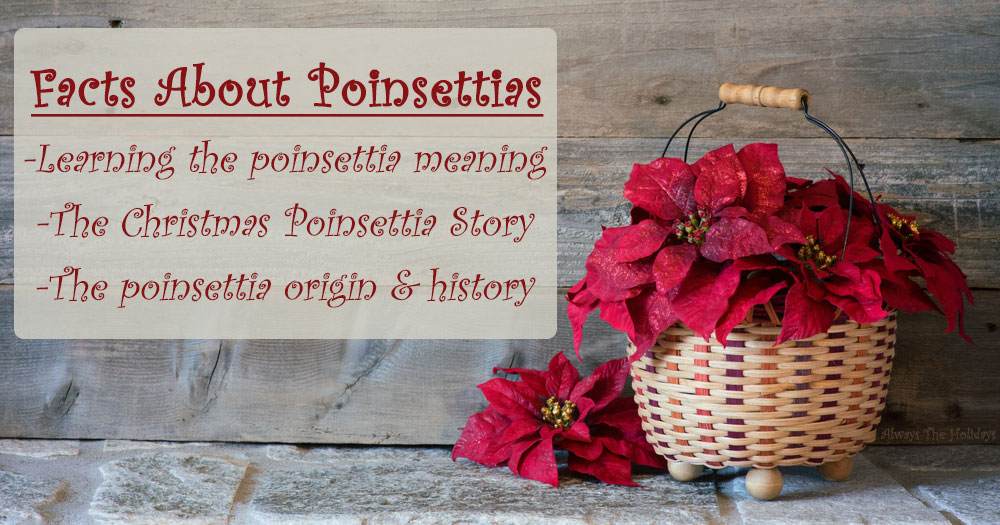 This poinsettia is so much more than a wintertime decoration, this plant has a long history, a special religious meaning, and has become a symbol of the Christmas holiday.

If you have kids make sure you check out our posts on another symbol of Christmas – Santa Claus! Call Santa’s phone number, or write a letter to Santa’s address at the North Pole!

Don’t forget to check out Santa’s list to see if you’ve been naughty or nice this year.

What is a poinsettia?

You may be surprised to know that poinsettias are not actually flowers! They are a small shrub, but over time have been trained to grow as the potted plants we so often see during Thanksgiving and Christmas.

Check out this post to learn how to grow poinsettias indoors for the holidays and beyond. They make a lovely and festive houseplant. 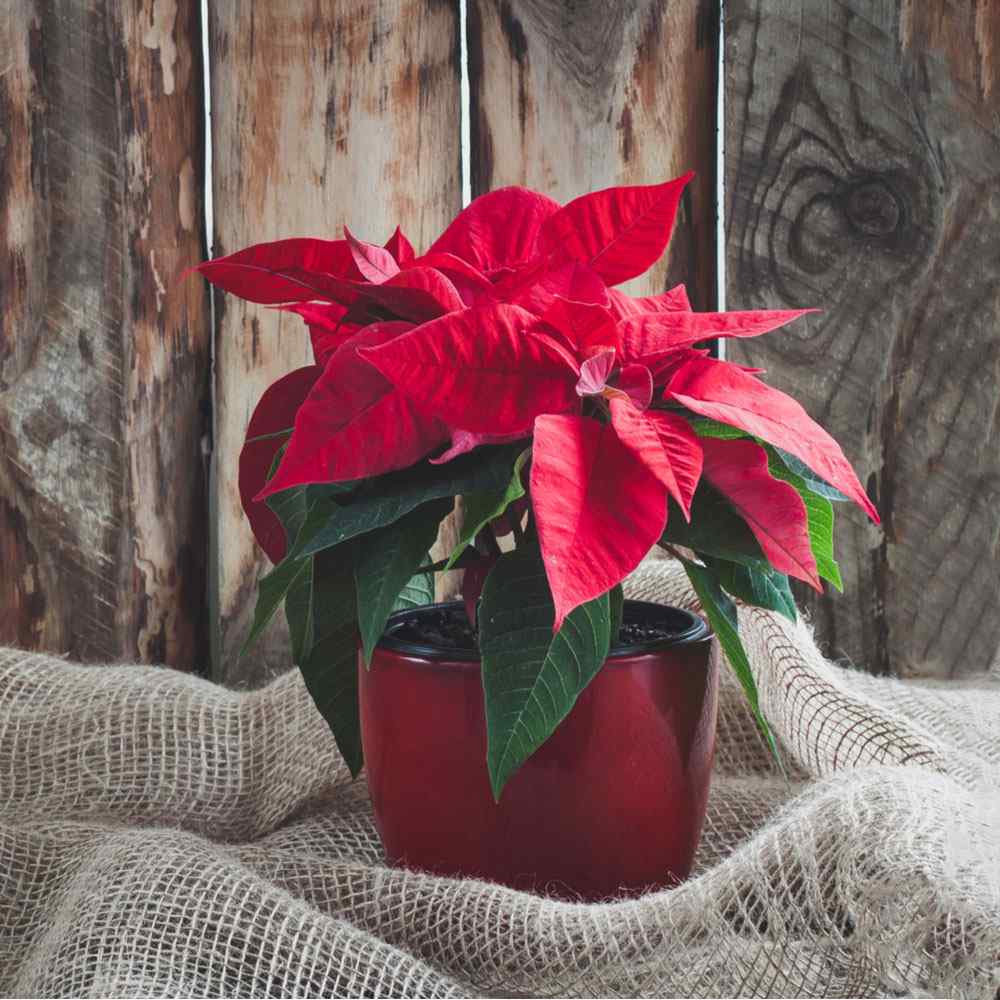 The red parts of the poinsettia that appear to be flower petals are actually leaves (called bracts). They form a circle around a cluster of small yellow flowers on the plant.

The botanical name for Poinsettias is Euphorbia pulcherrima, which literally means “the most beautiful Euphorbia”.

Poinsettias are also one of the two birth flowers of December (the other is Narcissus). Now that you know the poinsettia isn’t actually a flower, it’s interesting to think that poinsettias are one of the “flowers” that represent this month!

Facts about poinsettias – what is the poinsettia origin? 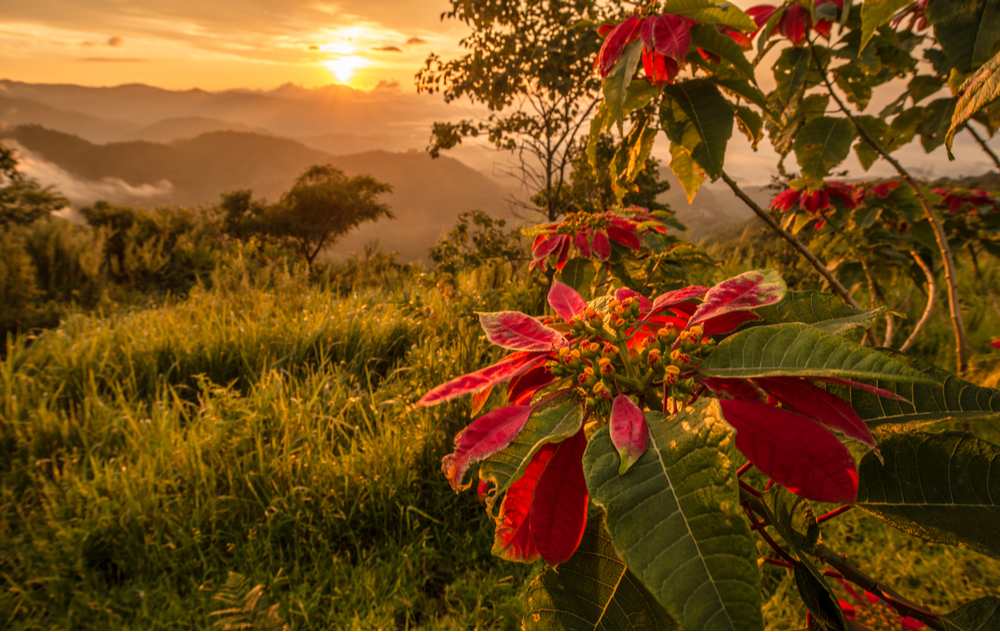 We have poinsettias in the United States because of a man named Joel Roberts Poinsett. He was a botanist and the first United States Minister to Mexico.

In 1828 when he saw the beautiful red plant growing in Mexico, he began shipping some back to his home in South Carolina where he could grow and study them in his greenhouse.

In addition to being an avid botanist, Joel Roberts Poinsett was very passionate about science. In fact, he is one of the reasons the Smithsonian Institute exists as a museum.

The benefactor of the Smithsonian, James Smithson left his estate of $508,318 (which today is the equivalent of about $15 million) to create “under the name of the Smithsonian Institution, an establishment for the increase and diffusion of knowledge.”. 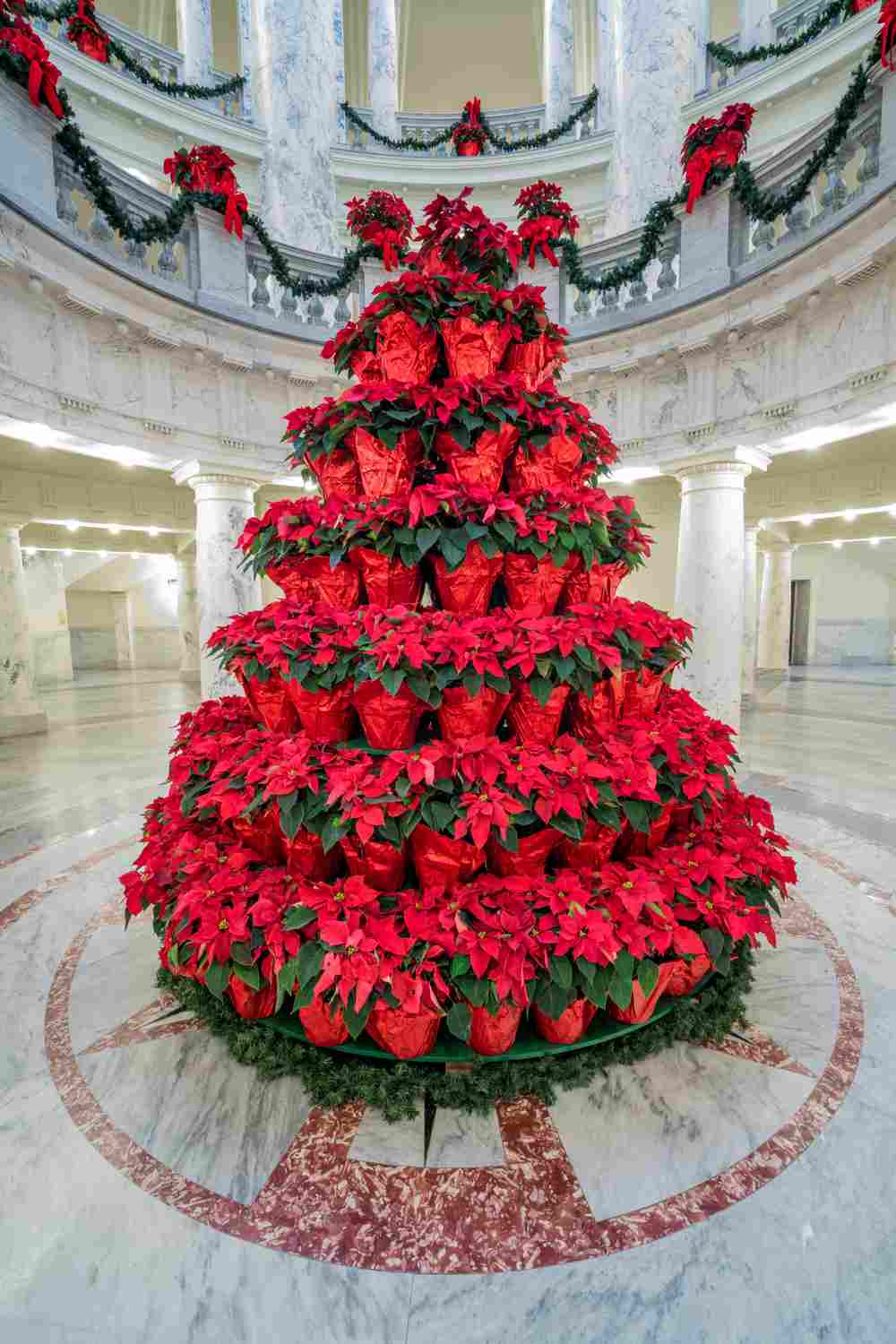 Creating this institution was a big task and there wasn’t a clear idea how it would work. At the time, Joel Roberts Poinsett was the US Secretary of War, and was in charge of the United States Exploring Expedition.

A man passionate about science, Poinsett insisted that scientists be included in these global travels. They brought back artifacts to display in Washington, DC (in what is now part of the Smithsonian).

After creating these displays, he urged that James Smithson’s money be spent to create a national museum.

If you make it out to the Smithsonian Gardens for Christmas this year, make sure to look at all of the beautiful poinsettias! You’ll know all the history behind them, and their connection to the museum.

Add to your knowledge of poinsettias by checking out these facts about poinsettias below. Some may surprise you! 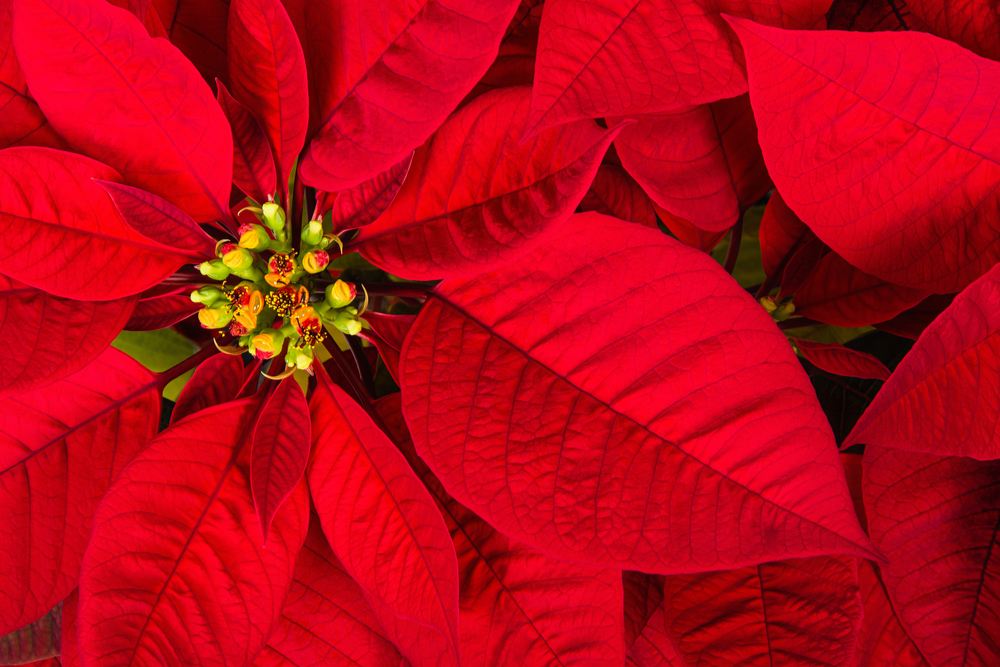 Want to learn more about other plants that are associated with the Christmas holiday? Check out this post featuring 27 Christmas plants.

You can’t talk about poinsettias without mentioning the name “Paul Ecke”. Paul Eckes Sr. and Paul Ecke Jr. had a massive impact on the poinsettia market. 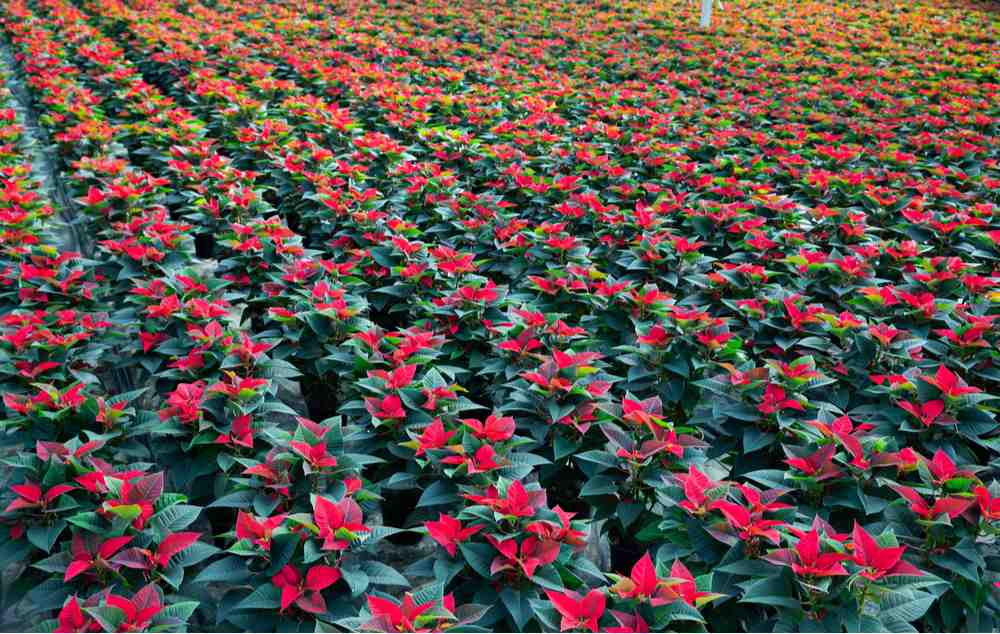 His son, Paul Ecke Jr. impacted the history of poinsettias by helping the horticultural industry push for floral and nursery crops to be included in the US Department of Agriculture’s research budget.

Why are poinsettias so popular at Christmas?

In addition to pushing for research funding, Paul Ecke Jr., revolutionized how poinsettias were produced and sold. He gave free plants to talk shows, between Thanksgiving and Christmas, which they featured on air. 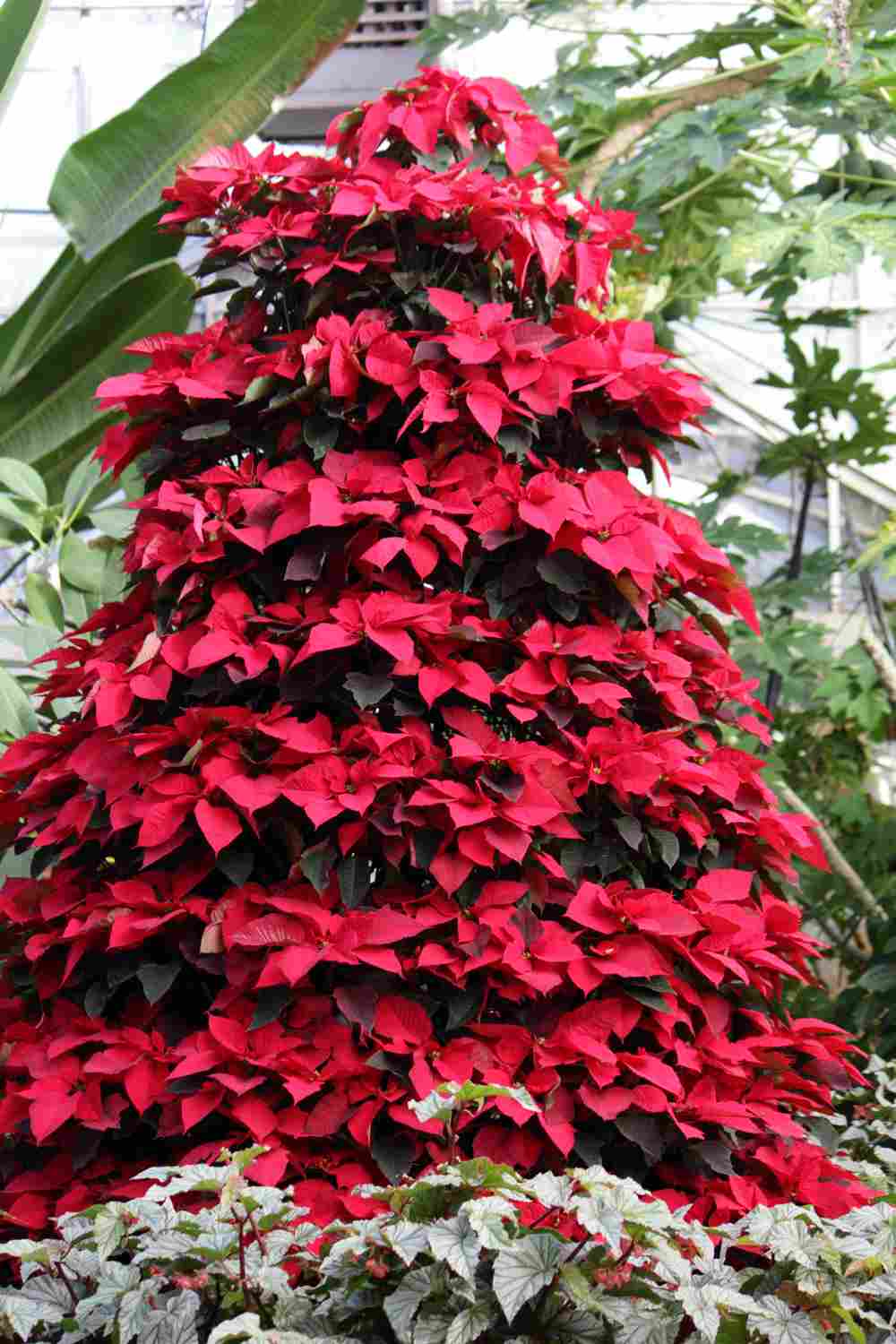 Paul Ecke Jr. also went on talk shows to promote the plant. This marketing made them the best selling potted plant, not only in the United States, but also in Canada too.

Poinsettias are popular at Christmas for two reasons: being heavily advertised on television during this time, and also because of the Mexican legend about the origin of the poinsettia.

Did you enjoy learning those facts about poinsettias? Here are some more poinsettia facts for you to enjoy! 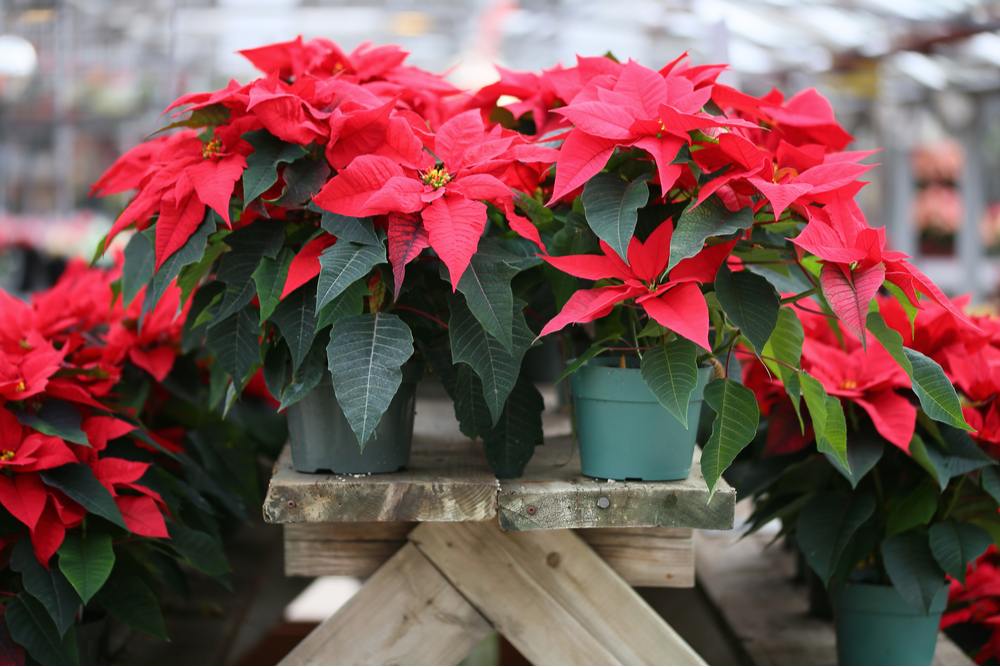 Want to add poinsettias decor to your holiday table this year? Check out this guide to making a poinsettia candy cane vase.

As mentioned earlier, the poinsettia is a symbol of Christmas because of a Mexican legend telling a poinsettia story set during the holiday.

The legend says that there once was a little girl from Mexico named Pepita who wanted to see the baby Jesus on Christmas Eve. She was poor, and had no gift to give him. 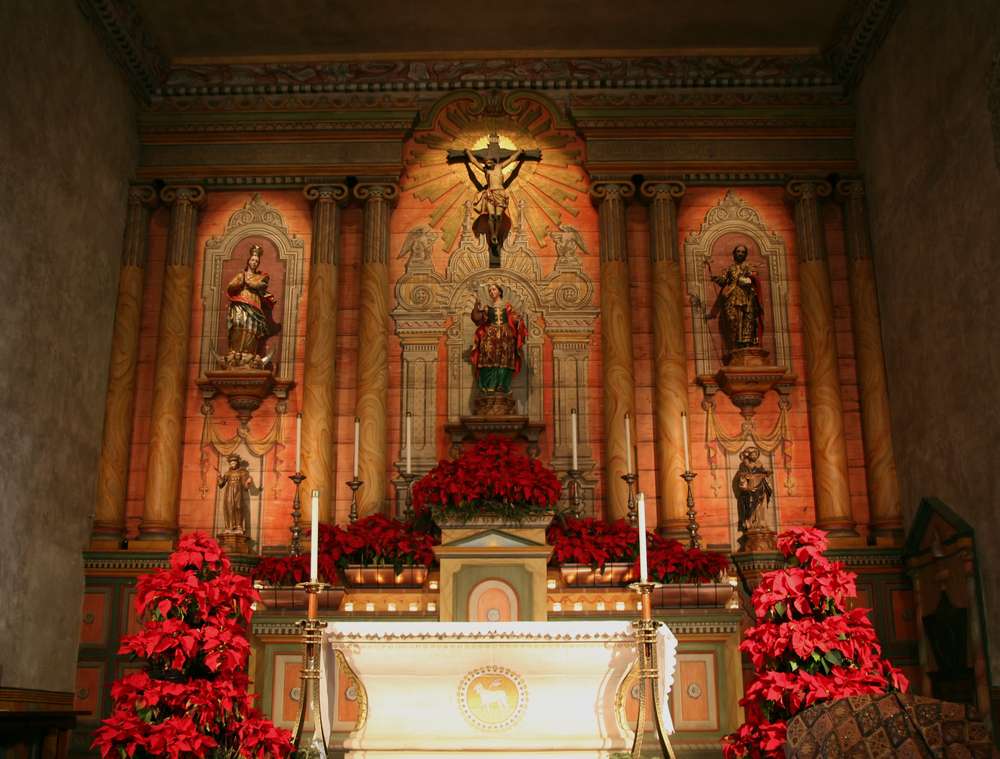 She felt sad, but her cousin, Pedro told her that the baby Jesus would appreciate any present given with love. As they were walking, she picked a bunch of weeds growing by the side of the road and fashioned them into a bouquet.

Though she was embarrassed by her small gift, as she walked to the nativity scene, she kept thinking of what her cousin said.

When she placed the bouquet down, it changed into beautiful red poinsettias. Everyone watching was convinced they had seen a miracle.

From that day forward, the poinsettias were called “Flores de la Noche Buena”, or “Flowers of the Holy Night”.

Poinsettias are not the only plants with religious symbolism. Easter lilies and dogwood trees are linked to the resurrection of Jesus Christ and because of this, they are two of the symbols of Easter. Palm branches also hold meaning on Easter. 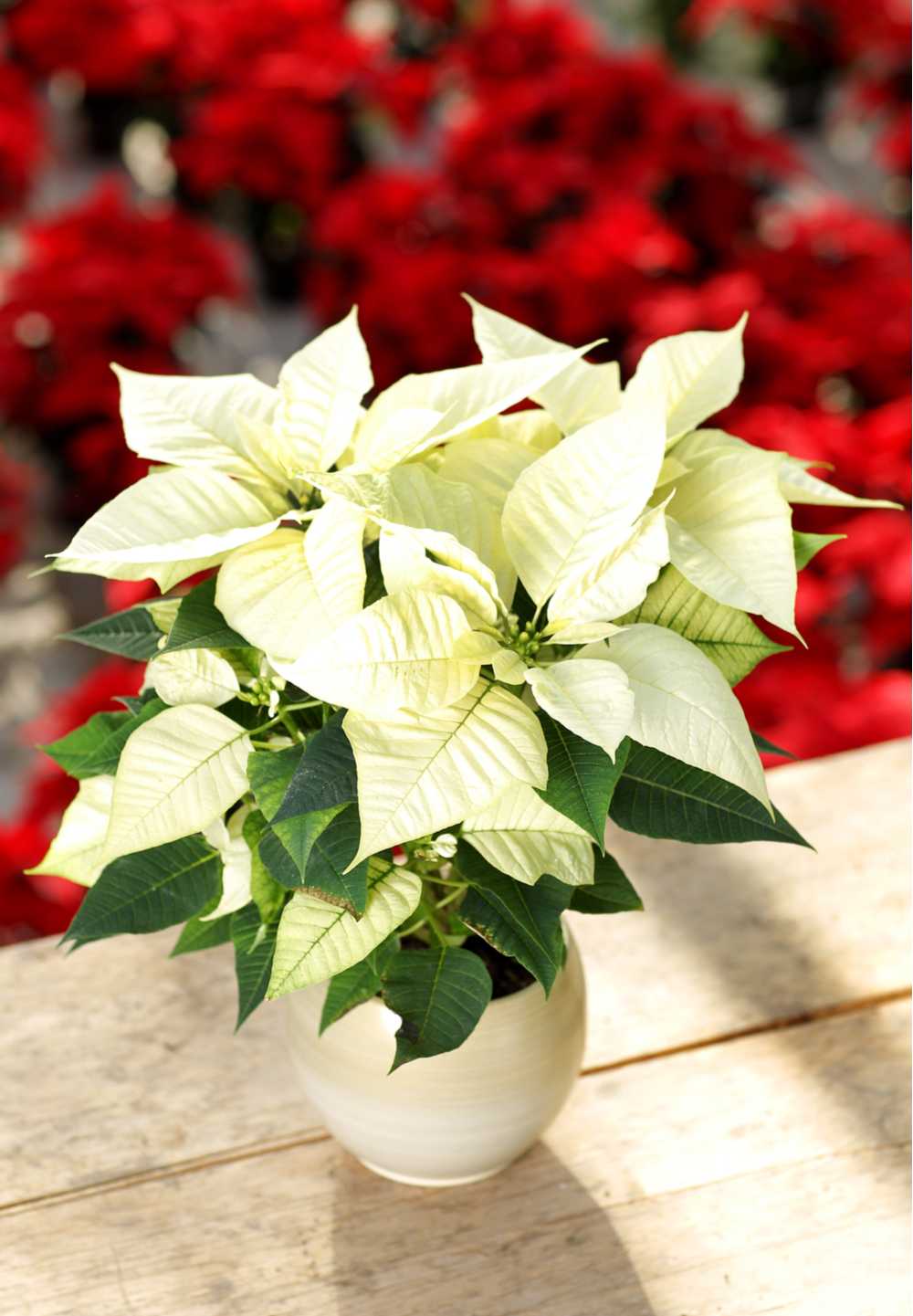 The shape of the plant looks like a star. It is said to resemble the Star of Bethlehem, which led the three wise men to Jesus.

Christmas is here, bring on the poinsettias!! Want to learn more about this beautiful plant? Head to Always the Holidays for facts about poinsettias as well as their history, origin, meaning and symbolism! 🌟 🌿 #poinsettiafacts… Click To Tweet

On July 22, 2002 Congress agreed that December 12 would become National Poinsettia Day. This day honors both of the men who made this beautiful flower so popular in the United States.

Check out our post on National Poinsettia Day, including fun and festive ways to celebrate the day!

The bill passed by Congress, specifically honors Paul Ecke Jr.’s contribution to the development of the poinsettia industry, and the ways in which he positively impacted the lives of others around him.

December 12, 1851 is the day Joel Roberts Poinsett died. Choosing the anniversary of Poinsett’s death for National Poinsettia Day serves as a reminder of his contribution to making poinsettias available to the United States.

If you enjoyed learning these facts about poinsettias, and discovering National Poinsettia Day, you’ll be excited to know there are actually several national days of the year dedicated to plants. 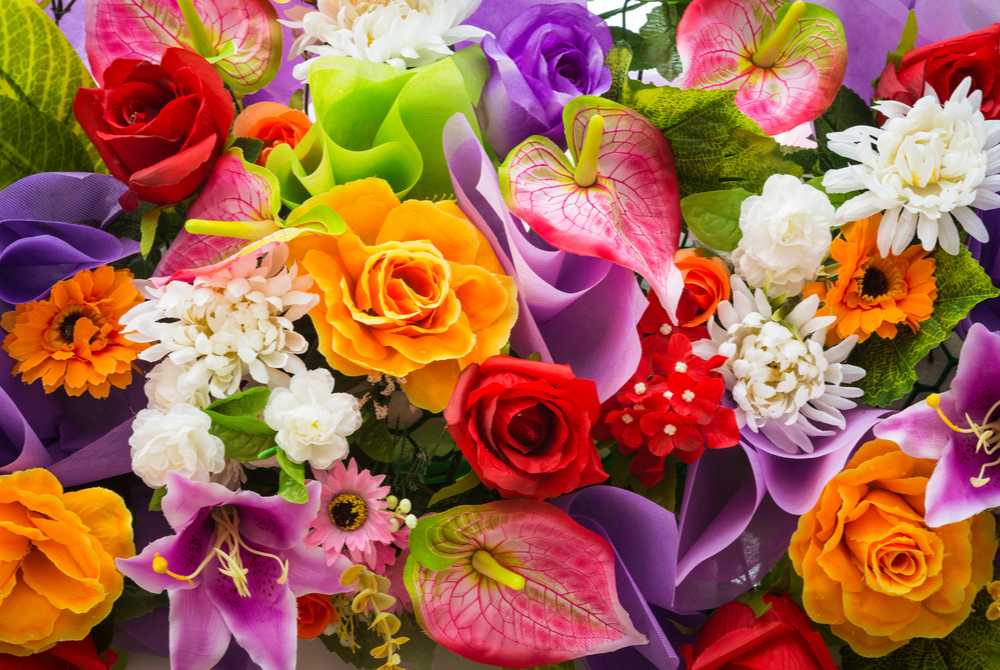 Below are some of our favorite plant themed national days:

If you love trivia and want to learn more facts about all kinds of things, make sure you head to our “fun facts” section.

Pin this post with facts about poinsettias for later

Would you like a reminder of these poinsettia facts? Just pin this image to one of your trivia boards on Pinterest so that you can easily find it later.

Looking for more inspiration for the holidays? Check out our Christmas quotes video on YouTube. 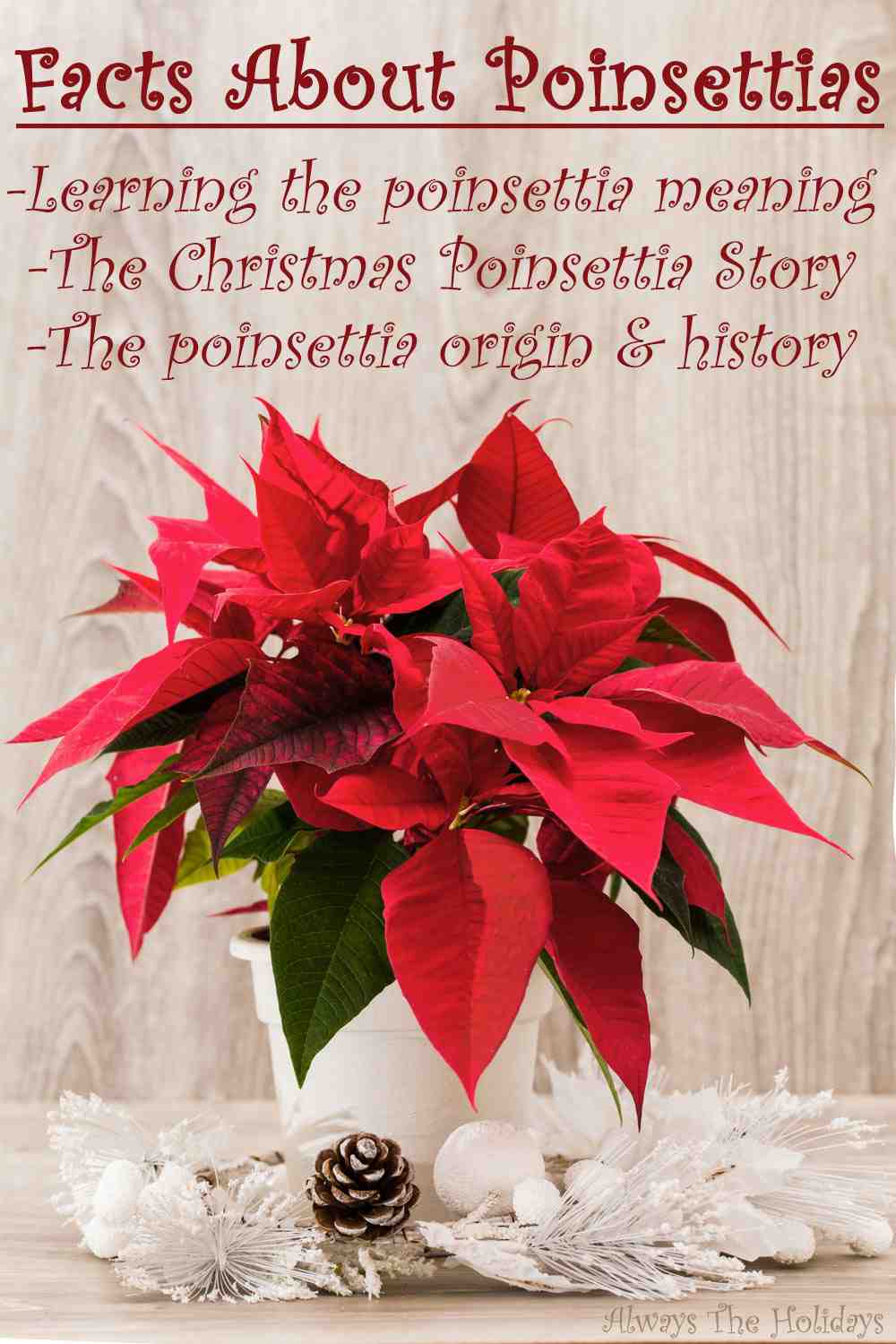