With spring drawing closer, and flowers beginning to bloom, its the perfect time to review the Easter lily meaning and symbolism.

Easter is one of the most important feast days in the Christian calendar. There are many symbols associated with Easter that have religious meanings, including Easter lilies!

There are two floral Easter symbols: Easter lilies and dogwood trees. You can learn about the legend of the dogwood tree here.

Let’s jump right in and take a closer look at the Easter lily symbolism, their meaning and connection to the Easter holiday. 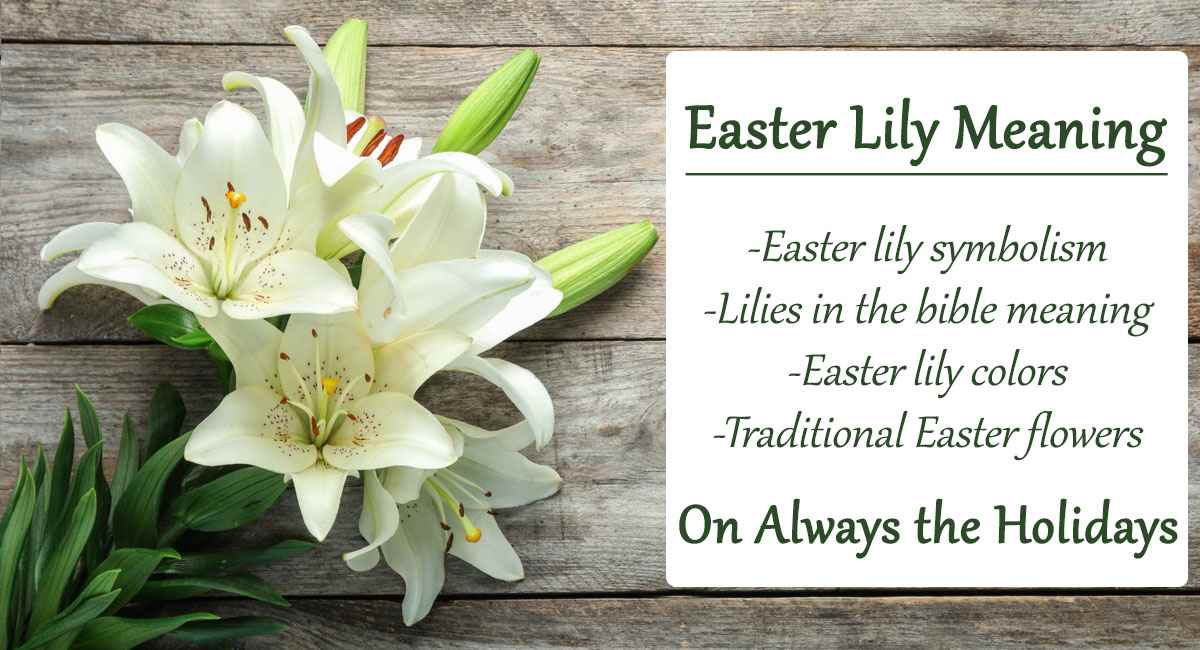 Easter lilies are a specific type of lily called lilium longiflorum. They have a central stalk, with dark green leaves coming off of it. The trumpet shaped lily flowers open at the top of the stalk.

Easter lilies can have as few as one flower, and as many as ten to fifteen flowers in well established plants. 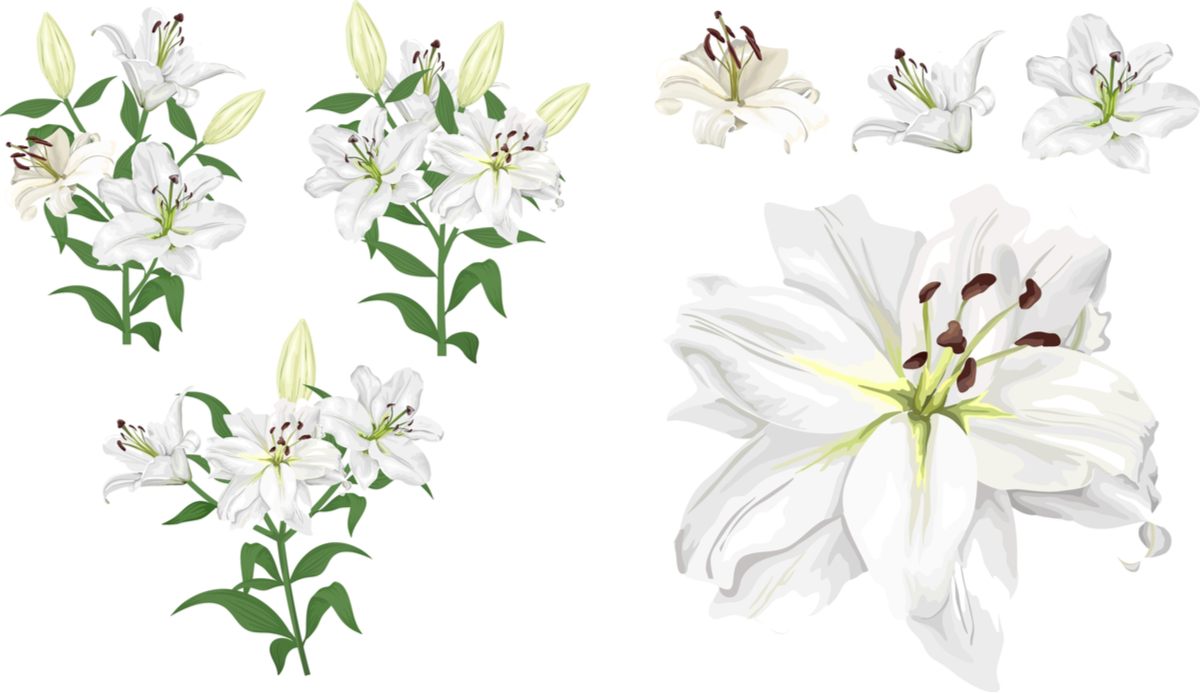 If you purchase an Easter lily in flower, the blooms will only last a few weeks. However, this plant is a perennial, meaning if you take proper care of your Easter lily, it will come back year after year!

Easter lilies are not to be confused with daylilies, which, despite their name are not actually a true lily.

Daylilies have long blade-like leaves that grow from the ground, and the daylily flowers bloom from stalks which do not have leave on them.

Asiatic and Oriental lilies look similar to Easter lilies, as they have a central stalk with leaving growing out of it, and flowers blooming at the top.

However, both Asiatic and Oriental lilies come in a brighter and wider range of colors than Easter lilies.

Each Easter lily variety has its own name. Some popular varieties of white Easter lilies are “Nellie White”, “White Heaven” and “Miracle Dwarf Longiflorum Lily”. 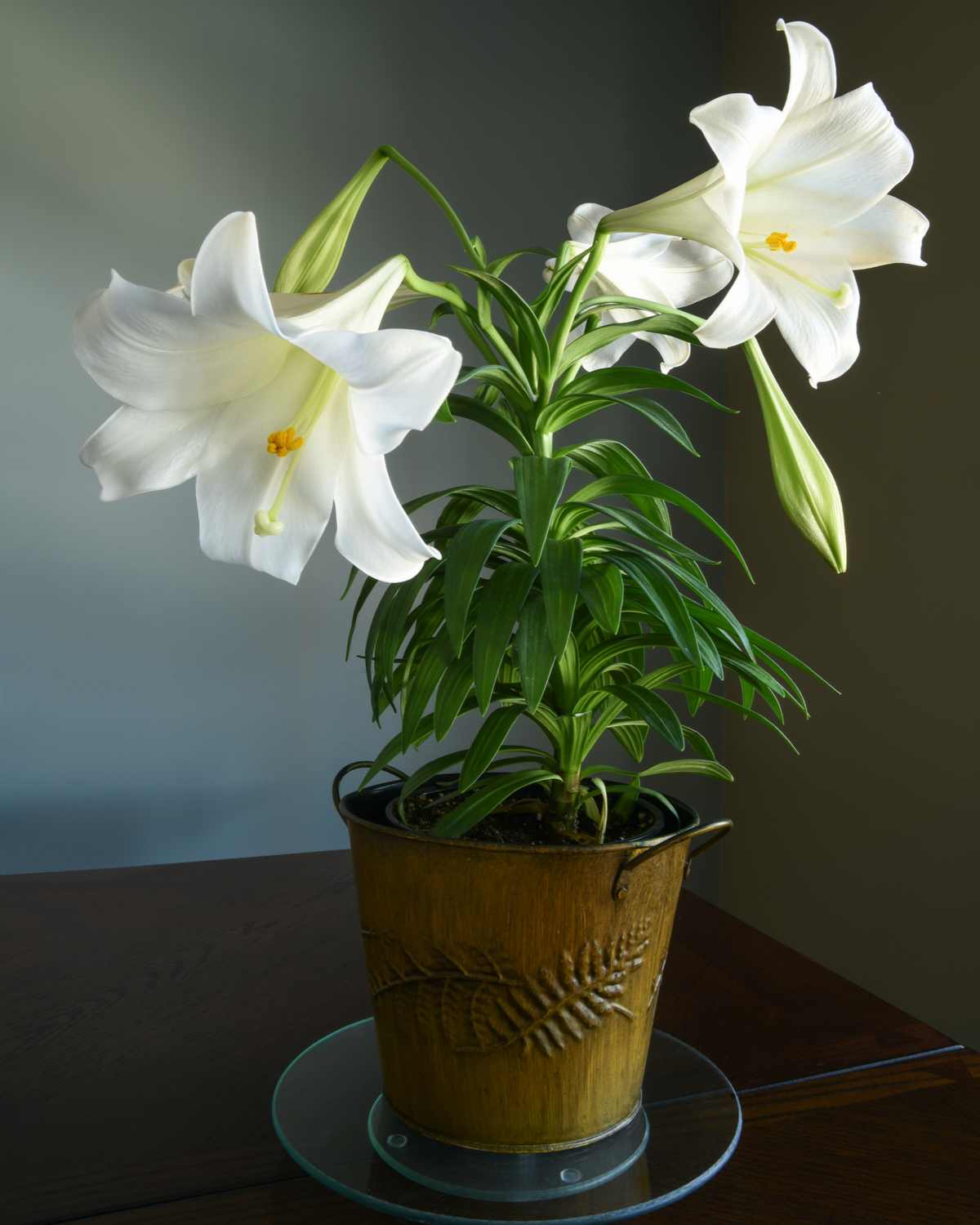 If you’d like one of the pastel Easter lily colors that isn’t white, try looking for the “Elegant Lady” also called the Pink Easter Lily, and the “Deliana” Lily which has pale yellow flowers.

If you’d like to learn more about the symbolism behind colors, make sure you check out our posts on Valentine’s Day colors and the colors of Mardi Gras.

They represent the purity of Jesus, who was free from sin. Easter lilies are also a symbol of the Virgin Mary. 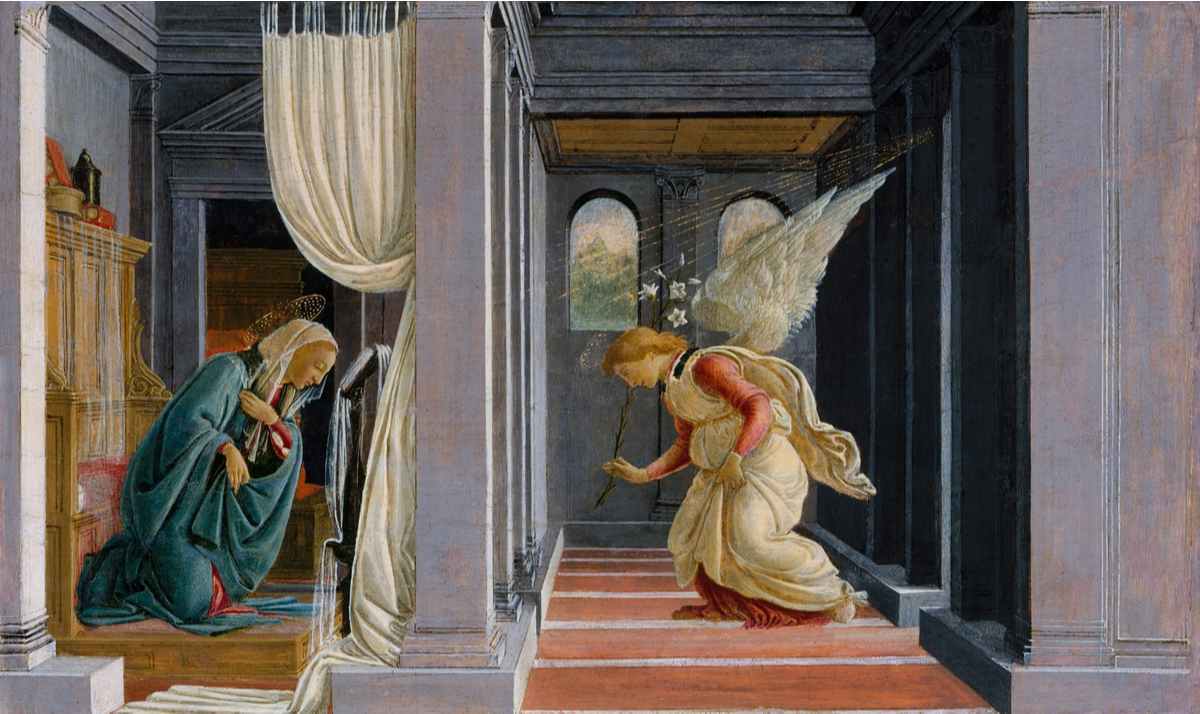 Easter lilies appear in religious art during The Annunciation, where the Angel Gabriel informs the Virgin Mary she will give birth to the son of God, named Jesus.

In art about The Annunciation of the Virgin Mary, the lilies are either shown in a vase or in the hand of the Angel Gabriel.

Meaning of the Easter lily

Also called the “white robed apostles of hope”, Easter lilies are believed to have sprouted many times throughout Christian stories. 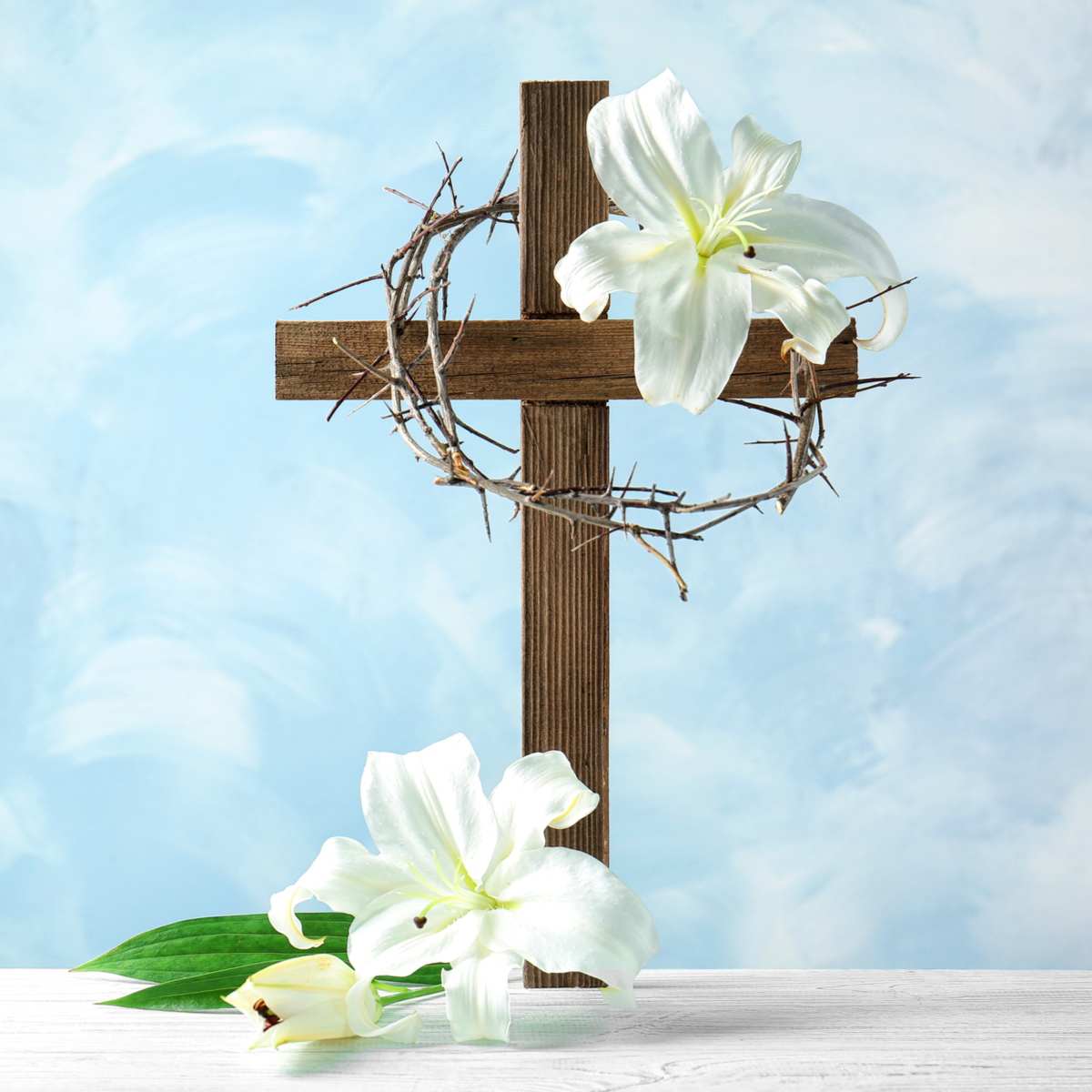 White lilies are believed to have grown from the spots where Jesus’s blood and tears fell after the Agony of Christ in the Garden of Gethsemane.

It is also said that white lilies sprung up in Golgotha, the location of Jesus Christ’s crucifixion.

In the Garden of Eden, Eve’s remorseful tears are believed to have formed lilies upon contact with the earth.

Lilies in the bible meaning

Lilies in the bible are used as a teaching tool. They are mentioned in Matthew 6:28 and Luke 12:27. It is in these passages where God asks his disciples to “consider the lilies in the field”. 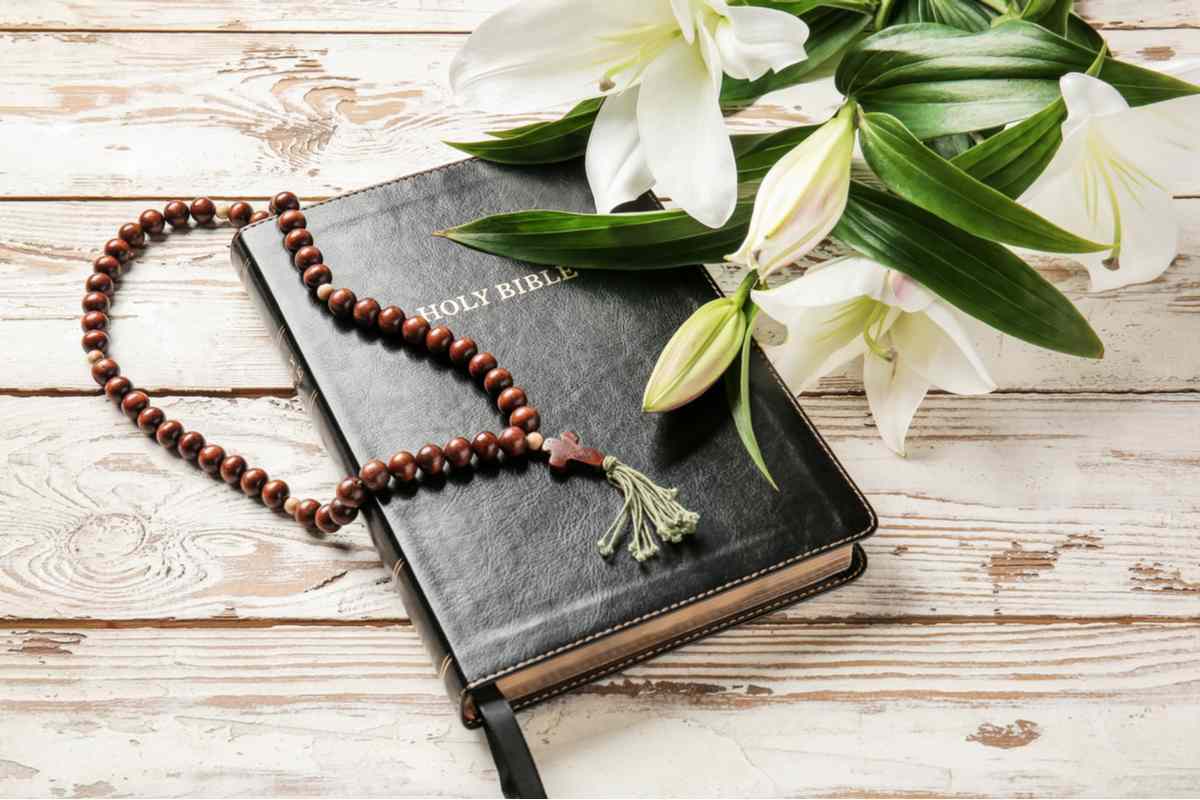 This passages encourages God’s followers not to worry about material possessions and needs. The passages say that God will provide for all His followers, just as He did for the lilies in the field.

It asks for faith in God’s ability to provide, and encourages releasing worry about matters in His hands.

The Christian feast day of Easter is the perfect time to reflect on the Easter lily meaning, as these beautiful, symbolic, flowers are frequently found during this holiday season.

The Easter lily meaning is to serve as a reminder of the purity, innocence and virtue of Jesus. They also represent his sacrifice, and are a symbolic representation of his resurrection. 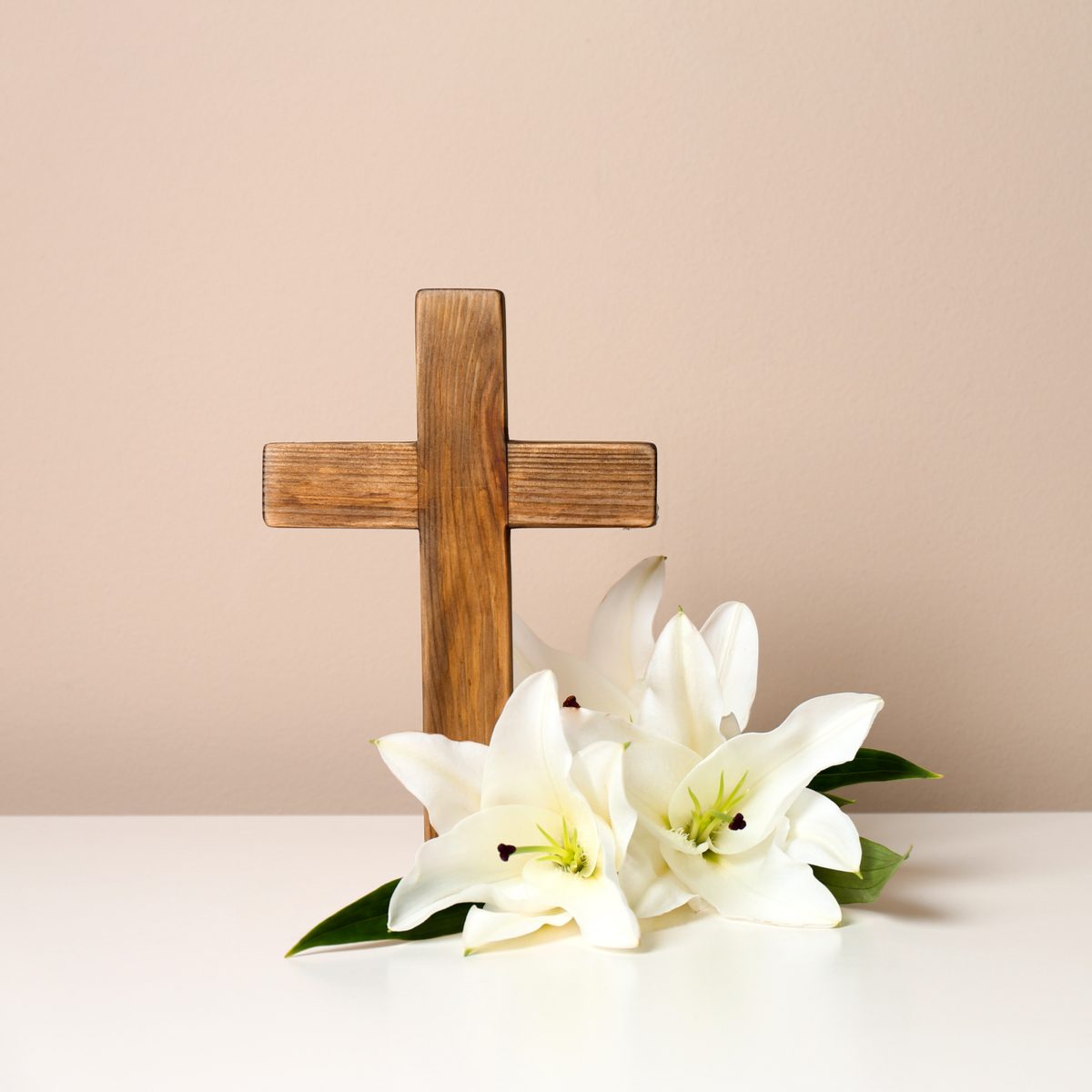 The meaning of the Easter lily is also a reminder to have hope that miracles can happen, as is evident from Jesus’s resurrection.

In addition the the religious Easter lily meaning, there is meaning attributed to the lily from Greek and Roman mythology, and also from events that happened in Irish history.

The Origin of the Milky Way

The Easter lily appears in Greek and Roman mythology. It is depicted in the oil painting, made by Jacopo Tintoretto in 1575, titled The Origin of the Milky Way. 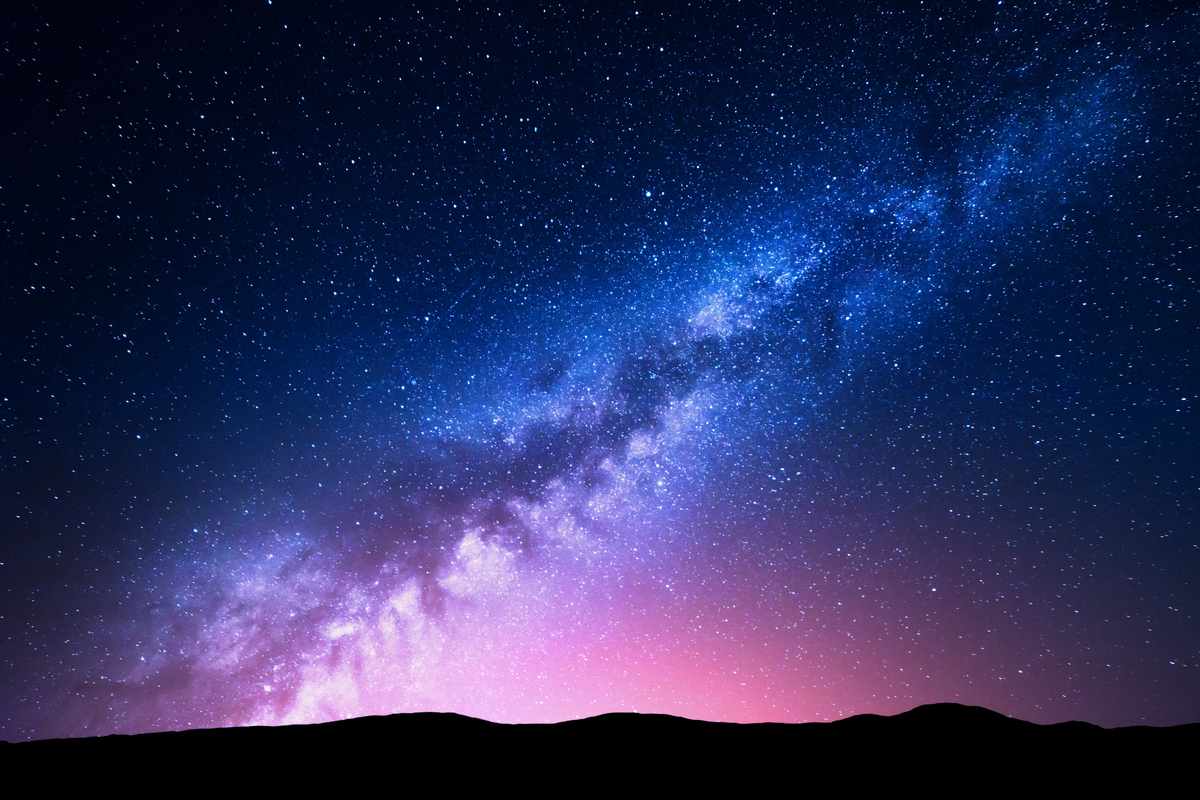 The painting, which resides in The National Gallery in London, depicts a Greek myth featuring the origin of Hercules’ immortality and the creation of the milky way.

Jupiter (the king of the gods) and Alcmeme (a mortal) had a son named Hercules. Jupiter wanted his son to become immortal so put him to the breast of his wife, the goddess Juno, while she was sleeping.

When Juno awoke, and pulled away from the baby, spraying breast milk to the sky. The milk that landed in the sky formed the milky way, and the milk that fell to the ground sprouted lilies from its contact.

These “Easter lily” badges are actually in the shape of calla lilies. They remember the Irish republicans who died during and after the 1916 Easter Rising in Ireland.

Ireland has a long history of wearing symbols of Irish pride and support for the Irish nationalist movement. A great example of this is wearing green for St. Patrick’s Day.

If you enjoyed learning about the Easter lily meaning, and want to add other traditional Easter flowers to your holiday celebrations, check out the ones below.

Many of the springtime flowers listed below grow from bulbs. It’s no surprise that the first flowers to be reborn after winter are traditional Easter flowers, as Easter is all about celebrating the resurrection of Jesus. 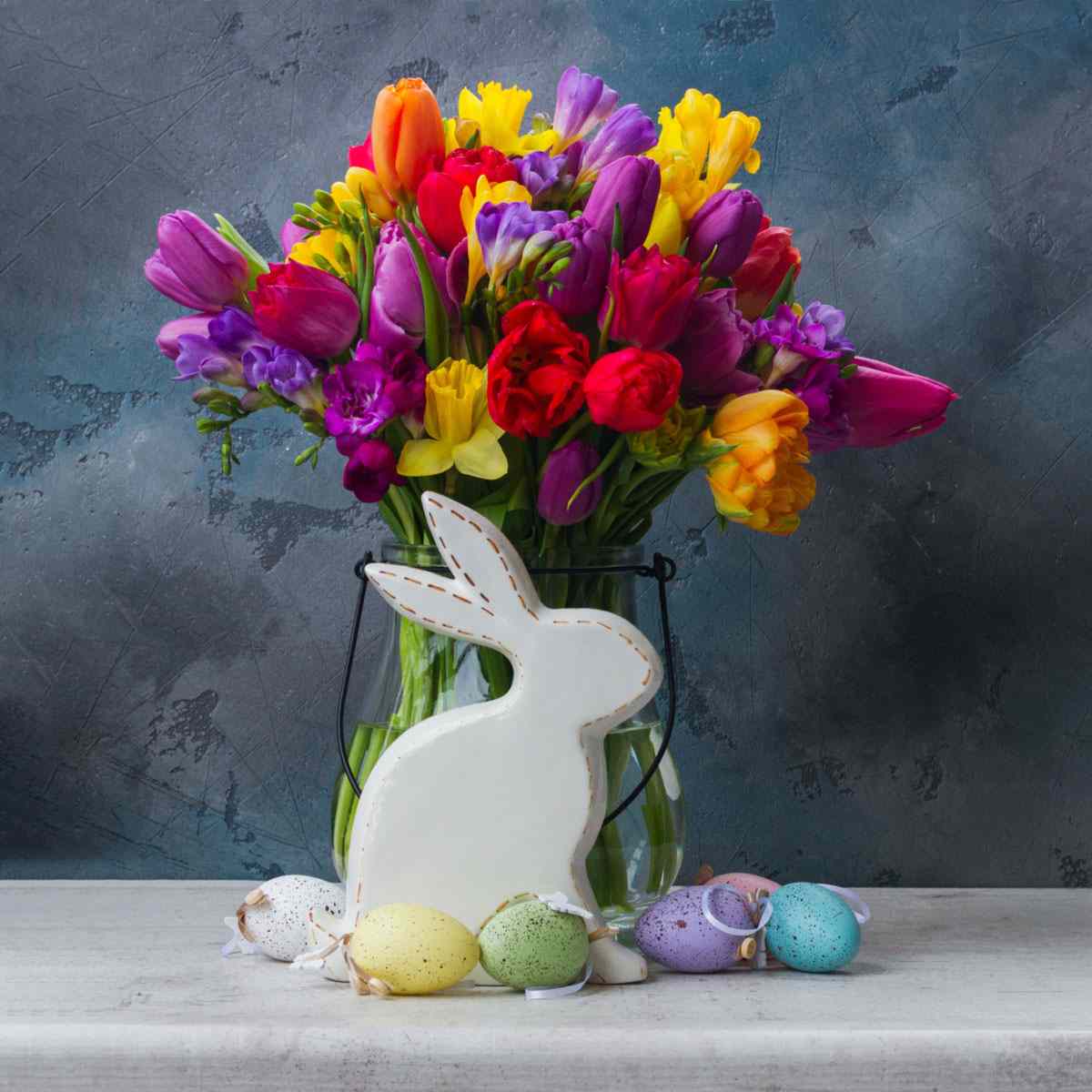 Some of the flowers above have a connection with Lent (e.g. daffodils, hellebores). If you’re curious about Lent, and pre-Lenten festivities, make sure you check out our posts on Mardi Gras.

Mardi Gras is a Christian feast day that occurs immediately before Lent. Like Easter, Mardi Gras has its own set of holiday symbols.

If you enjoyed learning the Easter lily symbolism don’t forget to share it with your friends. Here’s a tweet to get you started:

With Easter quickly approaching, check out the meaning of the Easter lily, and Easter lily symbolism on Always the Holidays! 🐣🌿 #easterlily #easterlilymeaning Click To Tweet

If you enjoyed learning these facts about Easter lily symbolism and the meaning of the Easter lily, be sure to check out these posts with Easter decor and recipes! 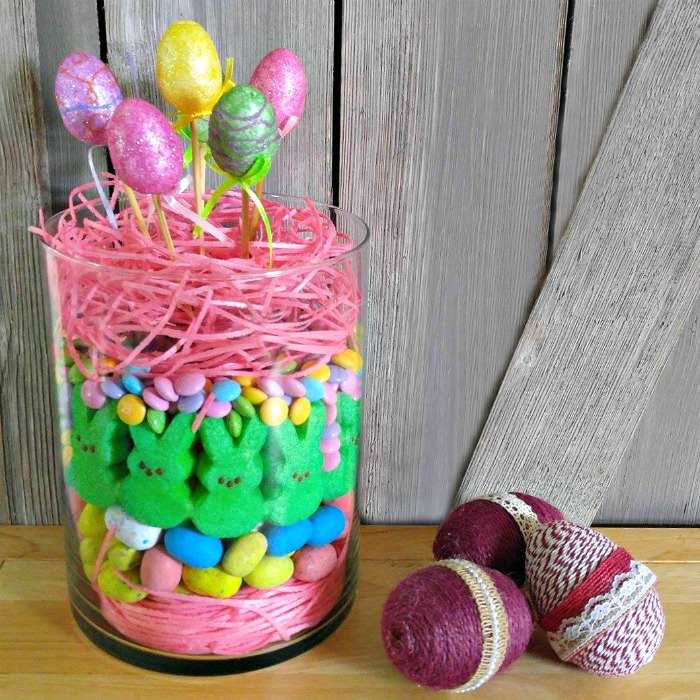 At Always the Holidays, we love celebrating by decorating for the holidays. If you do too, make sure to check out our post on farmhouse Easter decor.

Pin this post on the Easter lily meaning for later

Would you like a reminder of this post about the meaning of the Easter lily? Just pin this image to one of your Easter boards on Pinterest so that you can easily find it later. 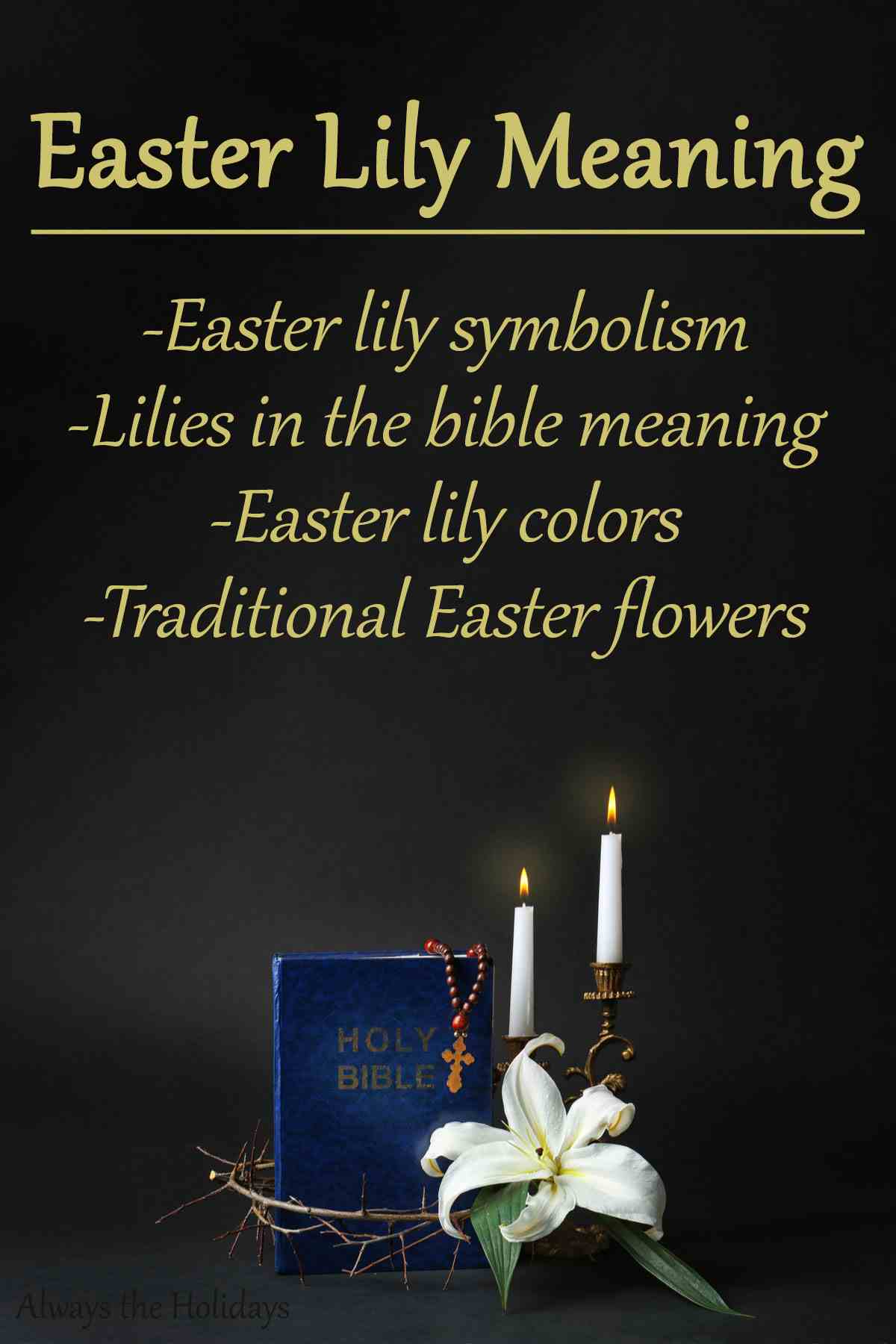