Let’s talk about cranberry facts. Other than being the main ingredient in a Thanksgiving side dish, what do you know about this tasty fruit? Get ready to brush up on your facts about cranberries!

If so, you’re in luck! Below are the answers to all of those questions and many, many, more. Keep reading to learn fascinating cranberry facts.

By the end of the post, you’ll be a cranberry expert! Don’t forget to let us know in the comments which of these facts about cranberries is your favorite.

Is cranberry a fruit?

Yes, a cranberry is a fruit. It is also a berry! You may be surprised to learn that many of what we commonly consider berries, are in fact, not berries at all!

The cranberry is one of the rare few which is commonly considered a berry, and also fits the botanical definition of a berry.

Botanically speaking, a berry is a fruit which forms from one ovary of a single flower. 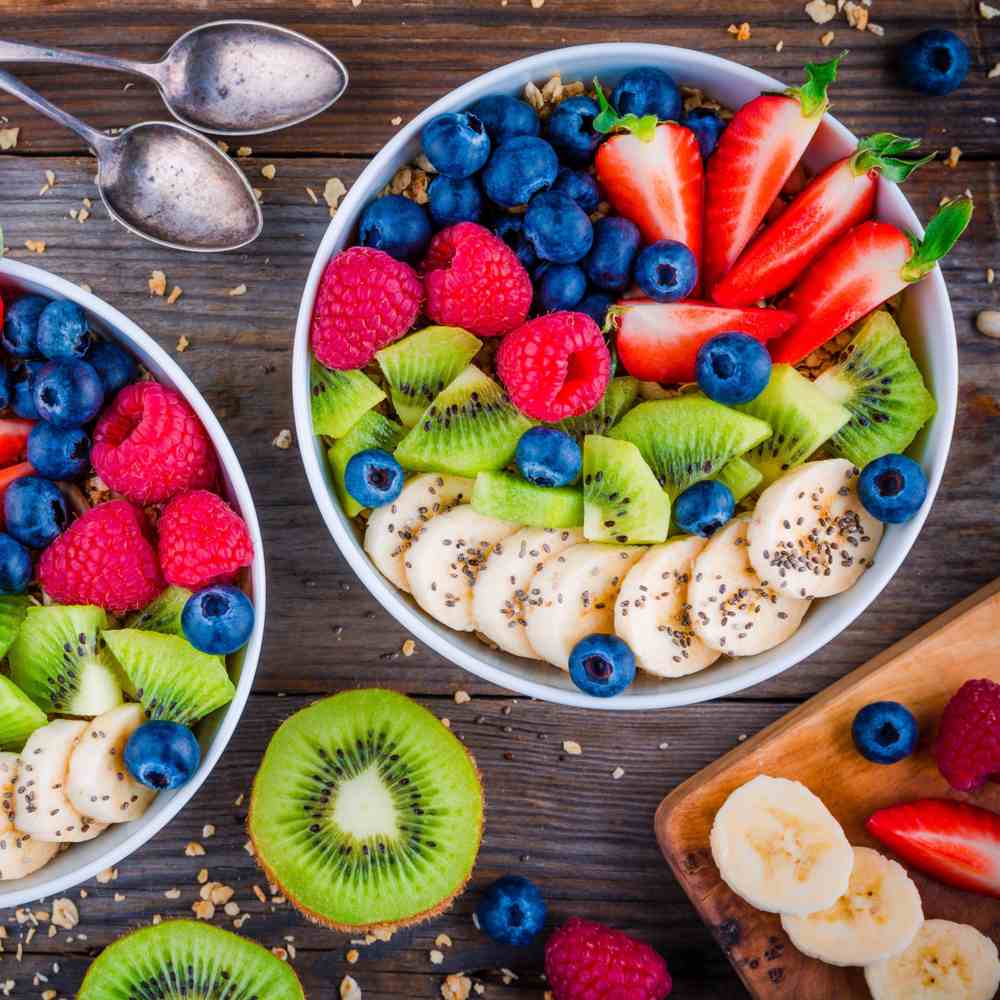 The botanical definition of berry includes some fruit we would not commonly consider berries, like tomatoes, eggplant, cucumbers, grapes, bananas, etc. Those fruit are also products of the ovary of a single flower, technically making them berries.

However, strawberries, blackberries and raspberries are not (botanically speaking) considered berries. They are technically aggregate fruits, which means that they are fruit which come from a flower which has more than one ovary!

If you find this topic as fascinating as we do, head over to our post on pumpkin facts to learn about some “vegetables” that are really fruit! (And if you’re wondering- yes, pumpkins are technically berries too).

Add to your knowledge of cranberries by checking out these facts about cranberries below. Some may surprise you! 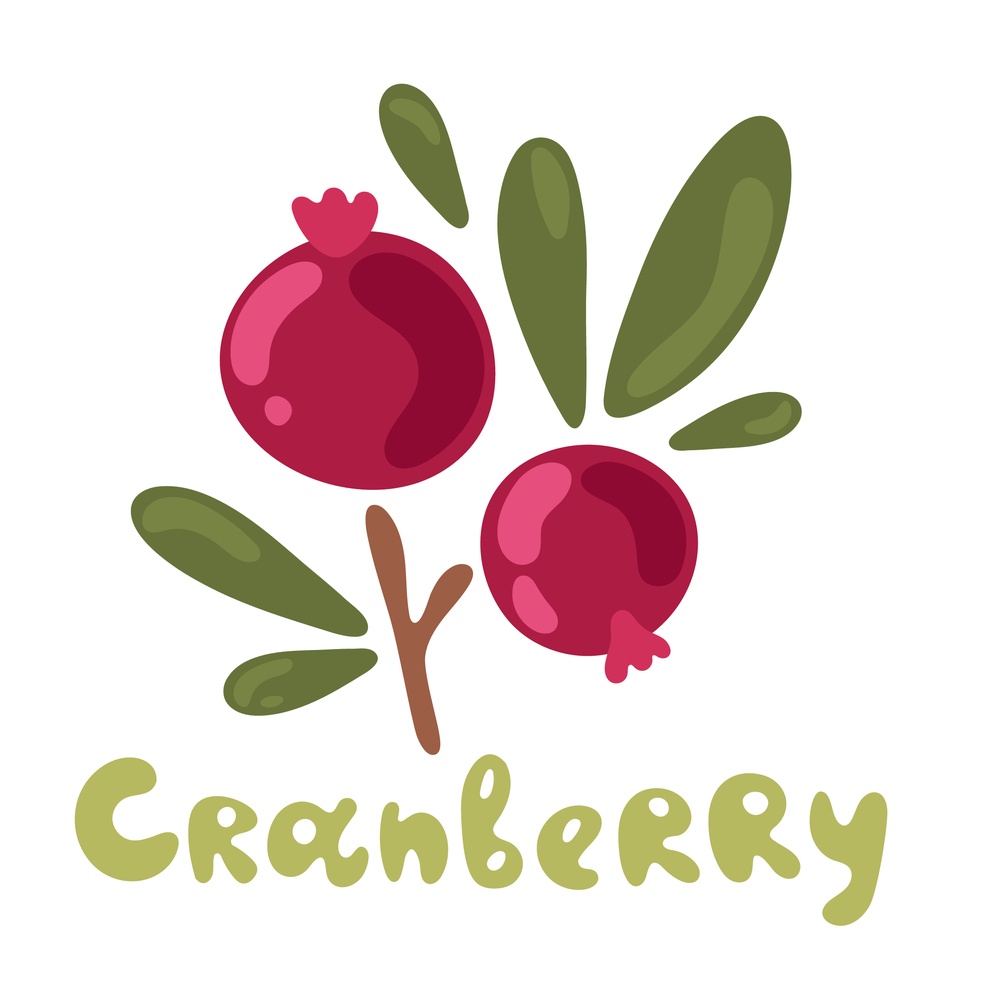 Want to make a classic cranberry drink? Check out the Cosmopolitan! We have an entire page dedicated to National Cosmopolitan Day with a recipe included.

Can you eat raw cranberries?

Yes, it is safe to eat cranberries raw. However, if you’ve ever tasted one, you might not want to. 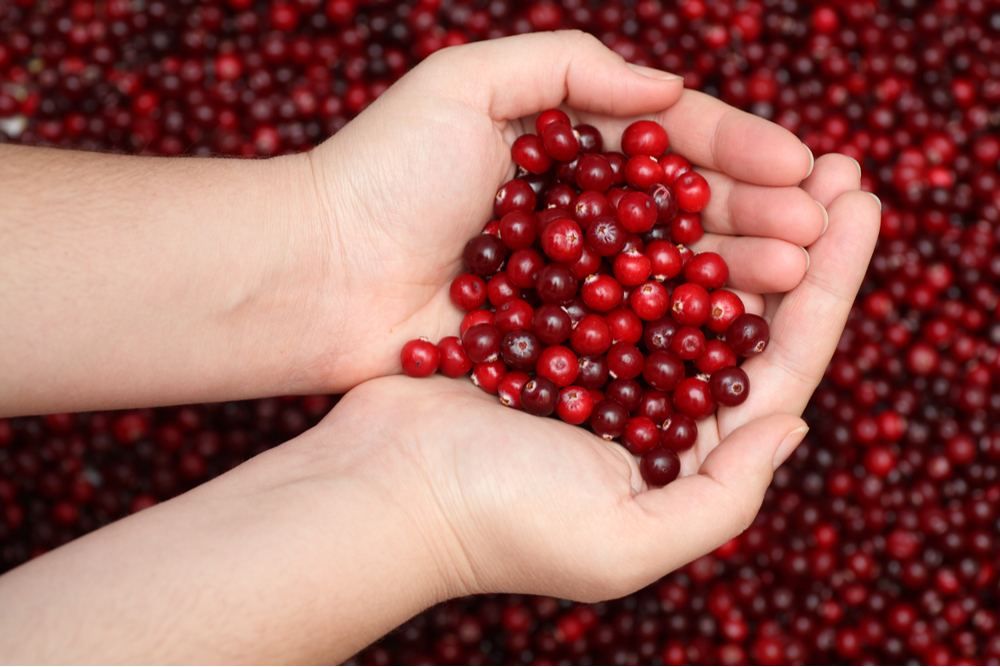 Cranberries have a tart (almost sour) taste, and for that reason, many people prefer not to eat them raw.

In fact, only 5% of cranberries are sold fresh, the other 95% are processed. Think about how you normally eat cranberries – often times, they’re sweetened.

How to eat cranberries

If you’re looking for a cranberry recipe that uses raw cranberries, but is also not super tart, check out our 3 ingredient fresh cranberry relish recipe. 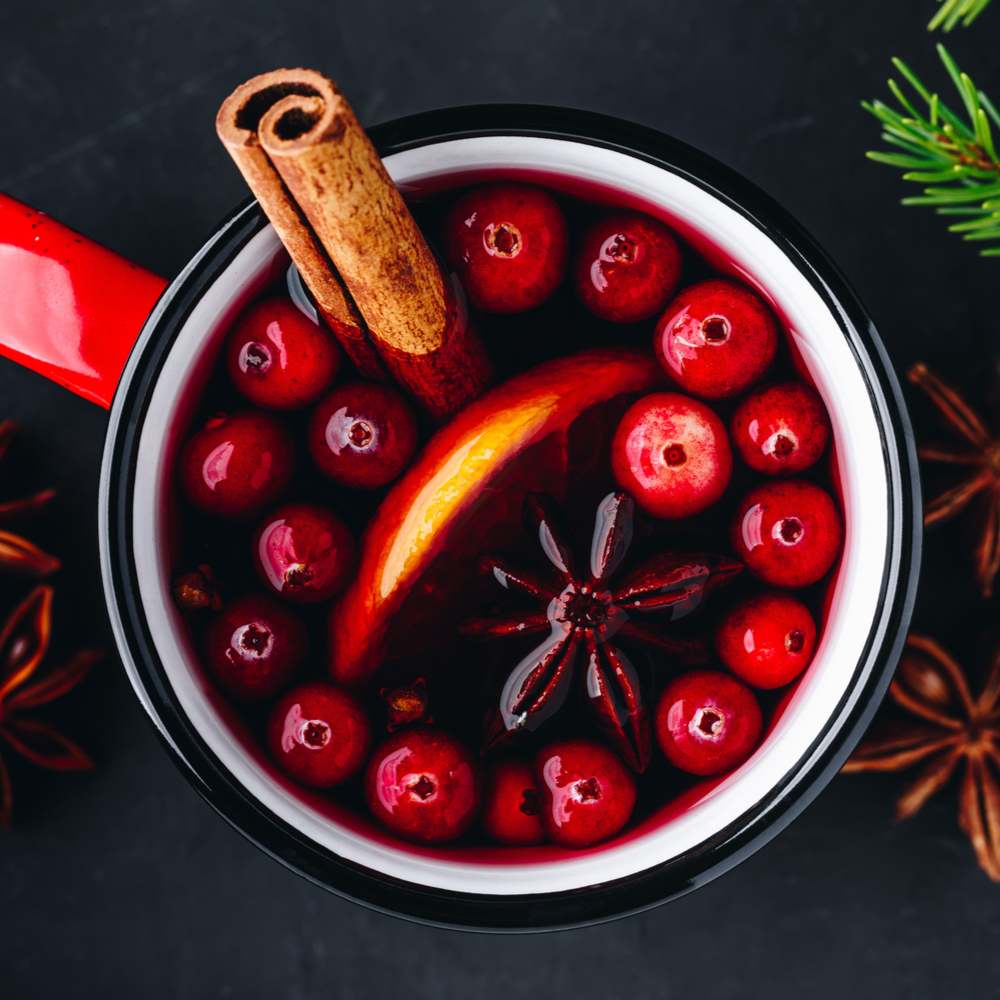 You could also try making a fresh salad with dried cranberries on top, or bring homemade cranberry sauce to your next Thanksgiving gathering.

Want to try drinking your cranberries? There are two types of cranberry juices you can find – one is sweetened, and one is unsweetened.

You could also try them mulled in slow cooker spiced wine during the holiday season. We, at Always the Holidays, love this warm, boozy, fall recipe!

Don’t forget to find out where to recycle wine corks after you’re done making the spiced wine! It’s a great way to be sustainable while enjoying a glass of wine.

How did cranberry get its name? 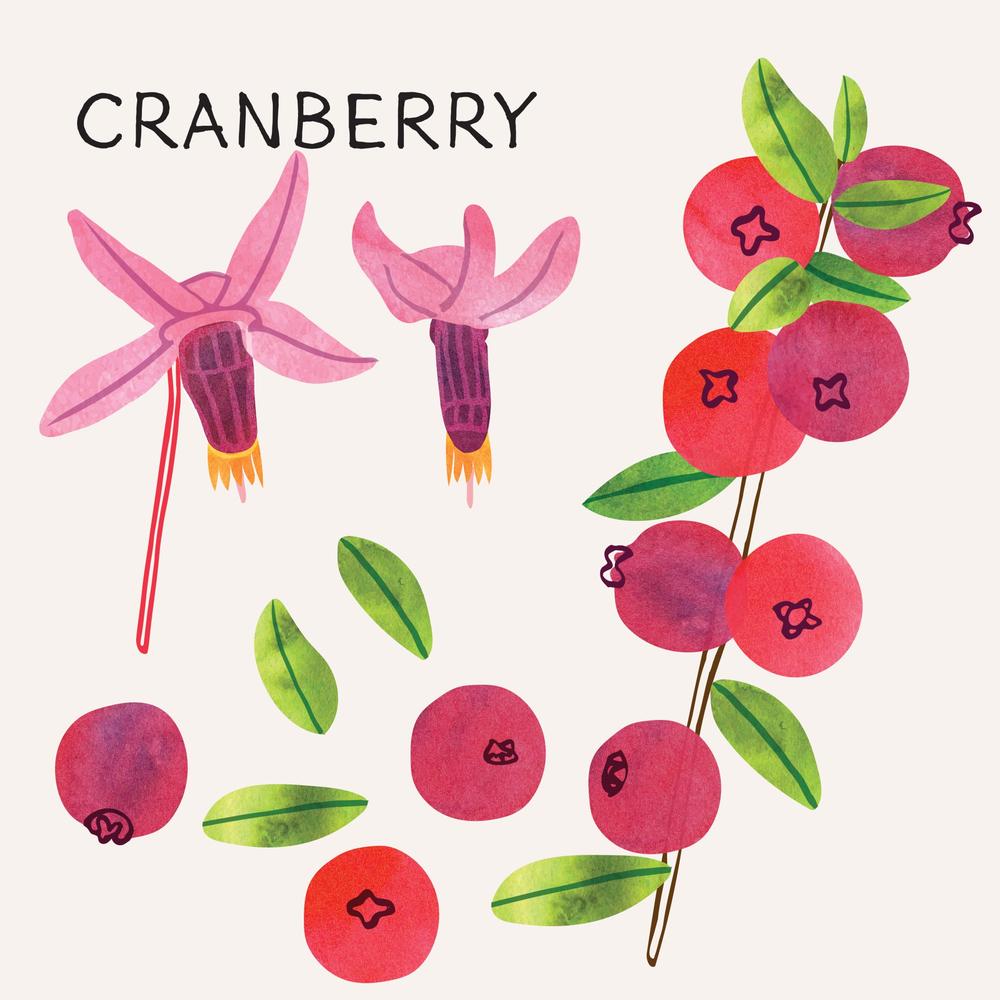 German and Dutch settlers renamed the fruit “crane berry” because they thought flower and vine looked like the head, neck and bill of a crane.

Over time the first “e” was dropped, and the name was shortened to cranberry.

Did you enjoy learning those facts about cranberries? Here are some more cranberry facts for you to enjoy! 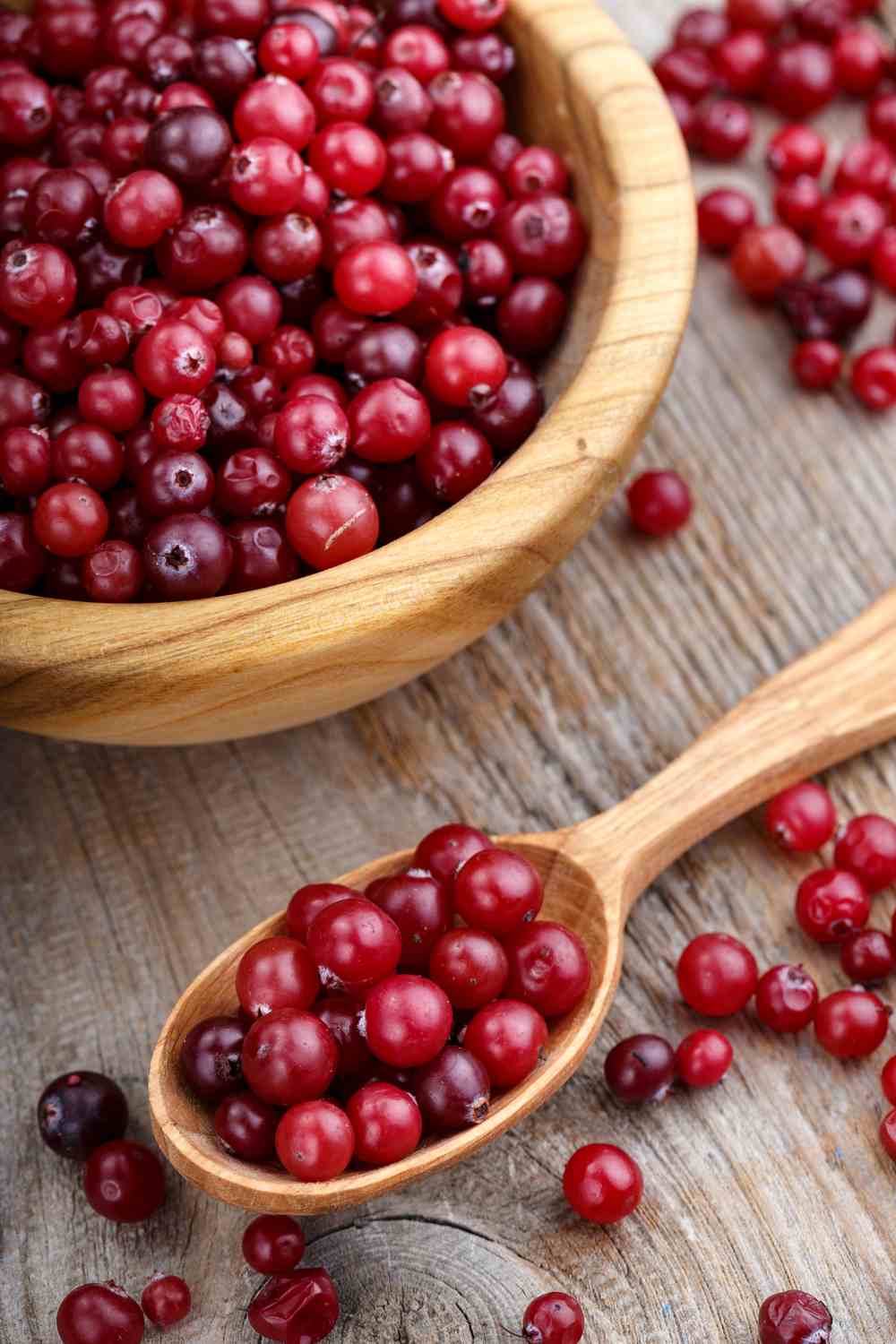 Where do cranberries grow?

Cranberries are one of few fruits native to North America. Some others are blueberries and Concord grapes. 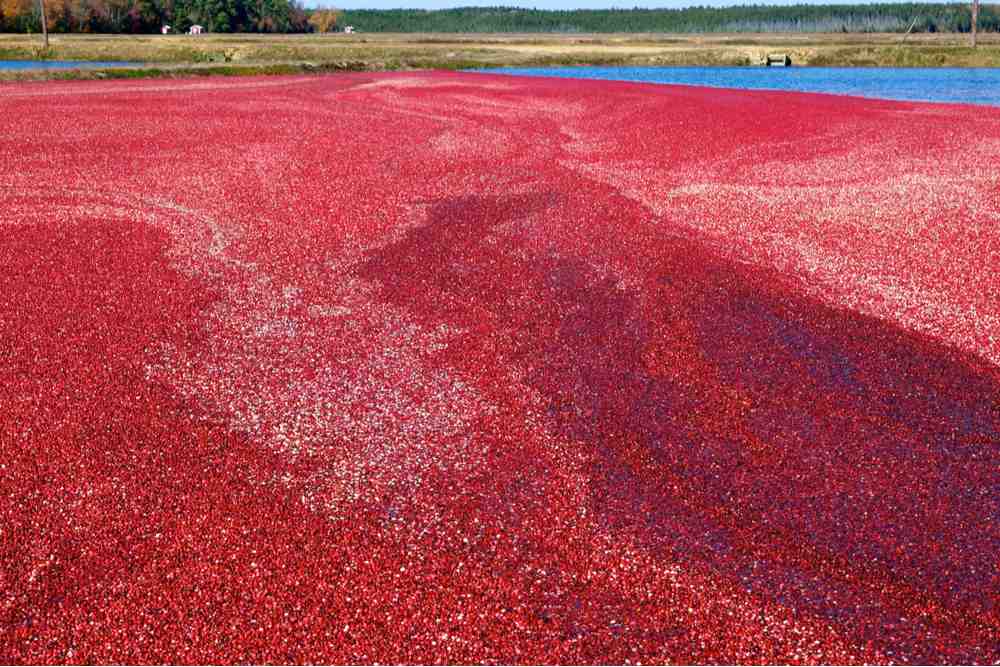 The reason cranberries are primarily grown in those five states, is because they have a specific set of needs in order to be fruitful.

How do cranberries grow?

As we learned earlier, cranberries are a fruit. If you imagined them growing on a fruit tree (like oranges, lemons, or limes), that would be understandable, but unfortunately incorrect. 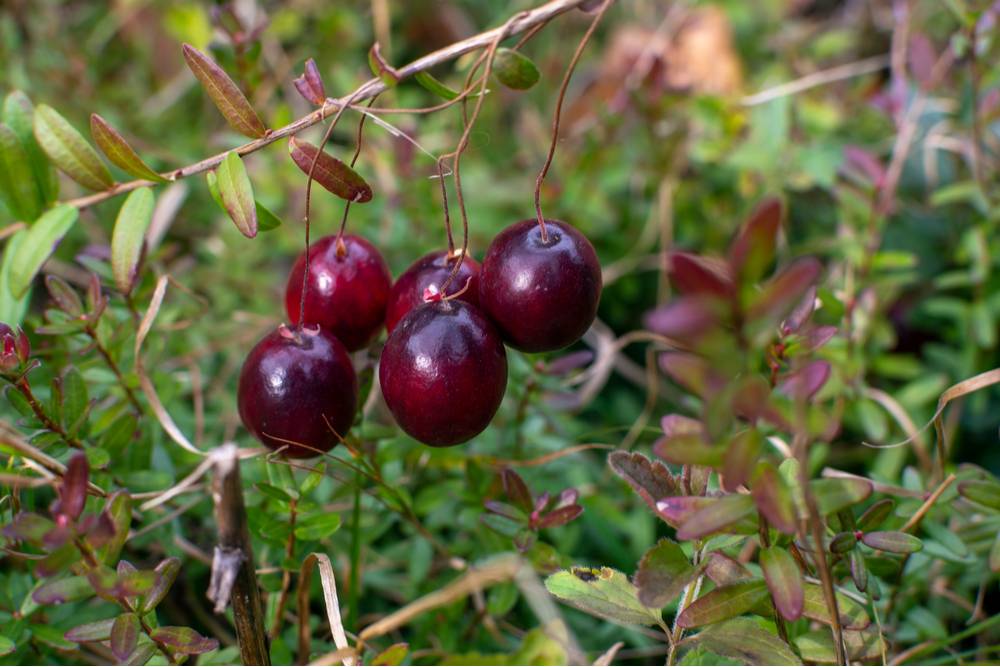 Cranberries grow on low running vines in marshes and sandy bogs. They need acidic peat soil, and to be near fresh water.

Cranberries have a growing season of April through November. They are harvested once a year from the middle of September, to early in November.

Do cranberries grow in water?

Contrary to popular belief, while cranberries need to be near water, they do not actually grow in water.

People often believe cranberries grow in water because of images like the one below. The image below shows what is called a cranberry bog. 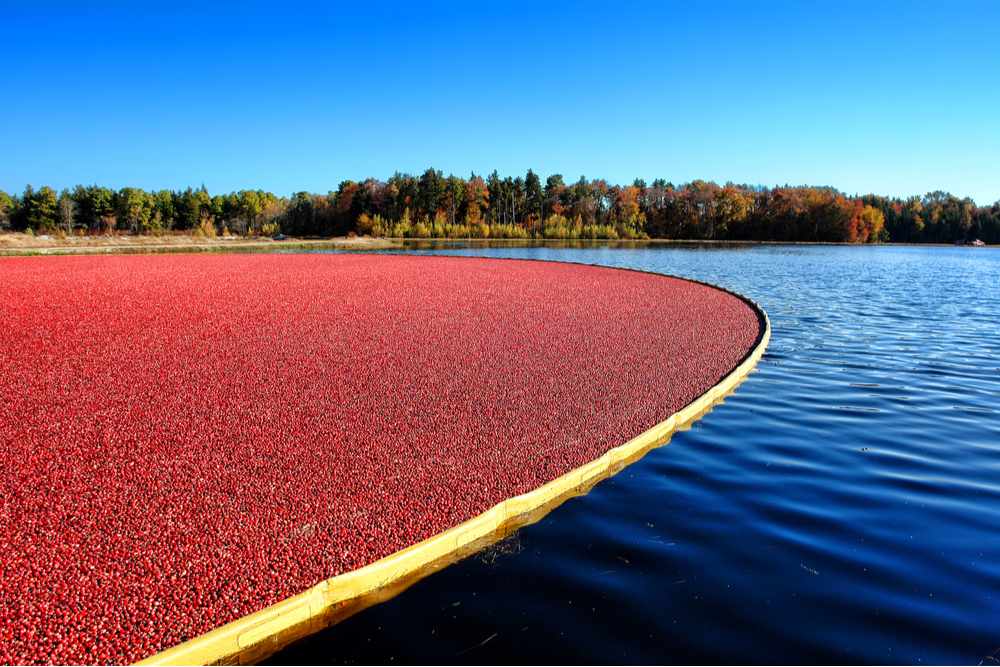 In wet harvesting, the fields where the cranberries grow are flushed with water, and a growers come through with machines to dislodge the berries from their vines. The machines are nicknamed “eggbeaters”.

Once the cranberries are dislodged, they rise to the surface of the water, are collected, and taken to be processed. Wet harvesting is very efficient, but it also damages the berries more than dry harvesting.

In dry harvesting, growers use a machine that looks like a big lawnmower to pick cranberries off the vine.

There are many fascinating things about this tart and tasty berry! Here are some more cranberry facts for you to enjoy. 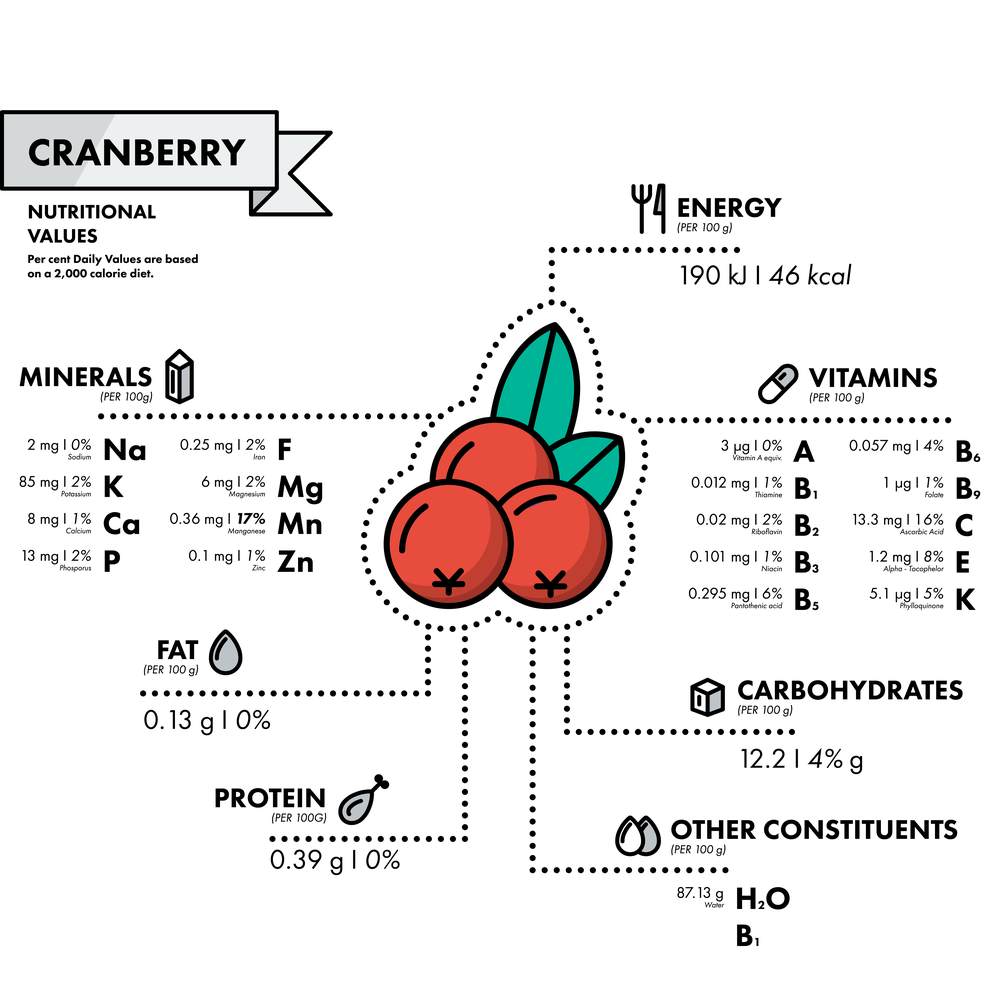 Previously, cranberries had to be eaten very quickly after being picked. However, with the idea for canning, cranberries became accessible all year long! 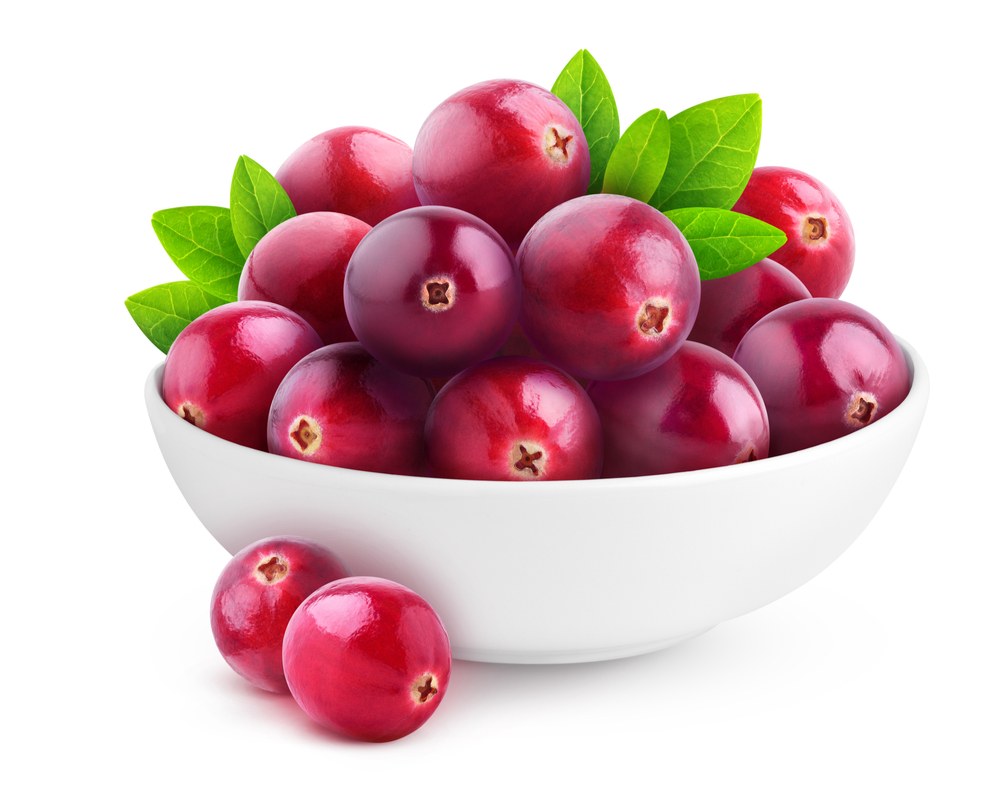 If you’ve ever bought cranberries you’re probably familiar with the brand Ocean Spray. This company was founded by Marcus L. Urann (the same one who first canned cranberries), Elizabeth Lee, and John Makepeace.

Ocean Spray is a farmer-owned cooperative, which gives all the profits back to it’s farmers. It is made up of over 700 growing families in North and South America.

Seven out of ten cranberries that are sold in the world today come from Ocean Spray.

If you’re a big fan of cranberries, you’ll be excited to know there are actually several national days of the year dedicated to cranberries. 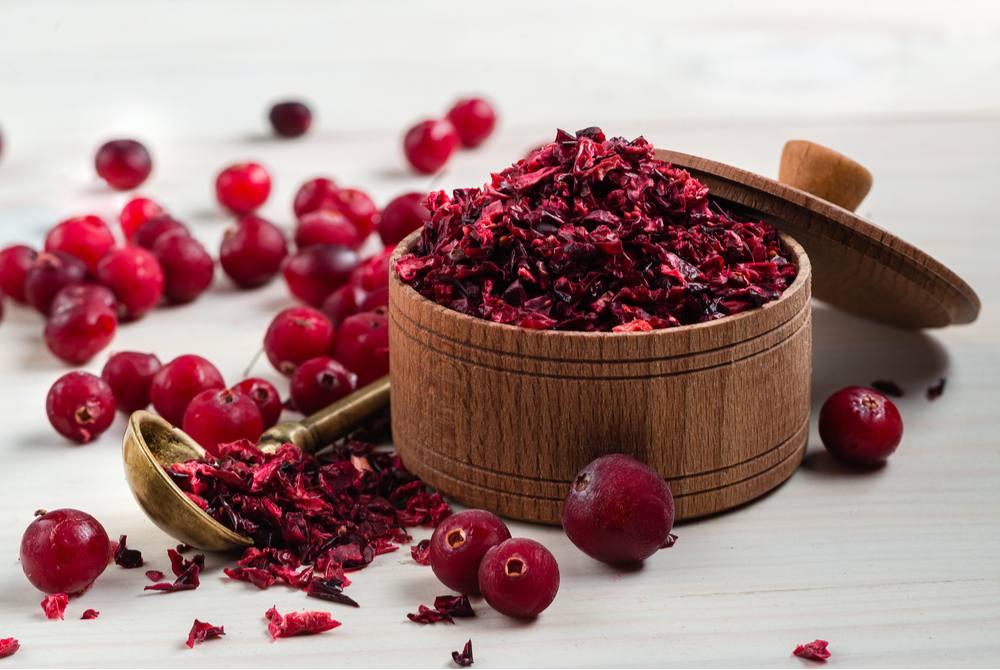 National Cranberry Relish Day celebrates cranberry relish, which is a side dish made of all raw ingredients (not to be confused with cranberry sauce!). Learn more about the day and check out our 3 ingredient cranberry relish recipe!

There is also National Eat a Cranberry Day which falls only one day after National Cranberry Relish Day.

If you enjoyed learning these facts about cranberries, be sure to also check out these posts to learn more fun facts about some of your favorite things! 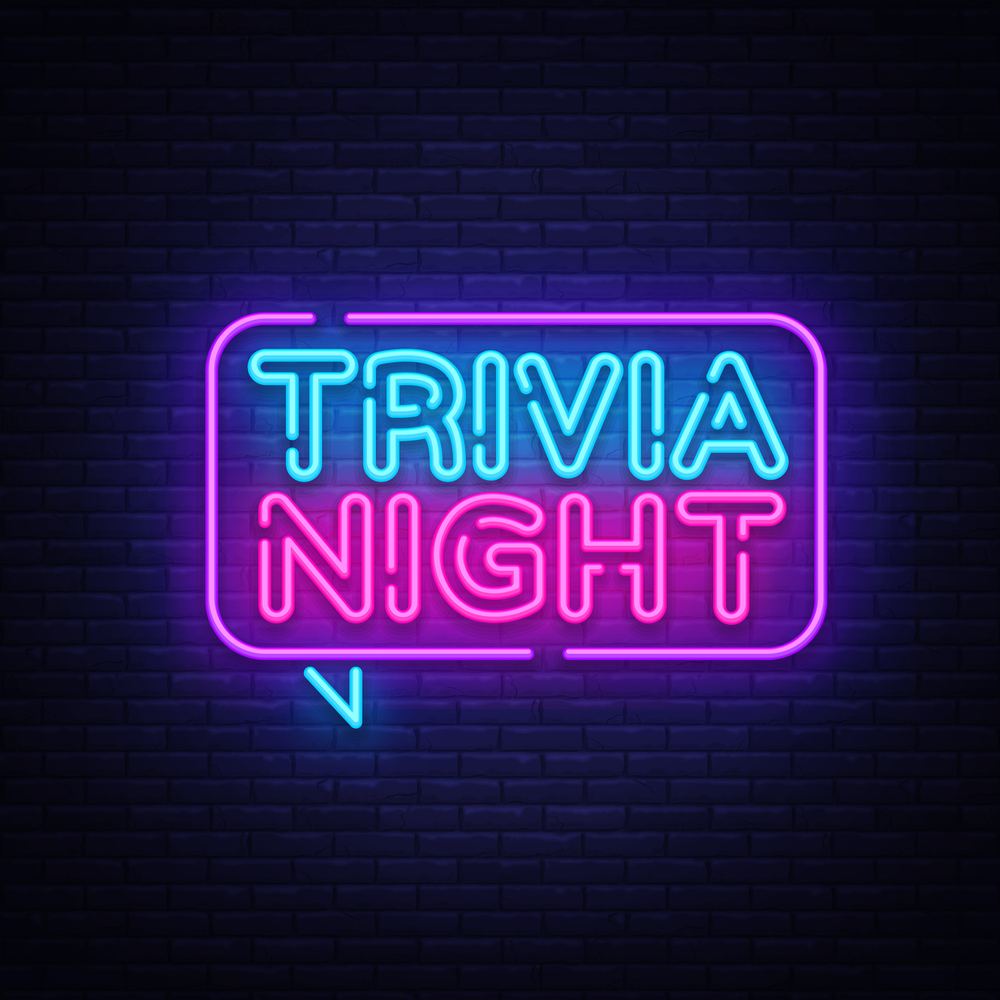 If you need to brush up on random history and fun facts for your next trivia night, you can always browse through our entire “fun facts” section!

Would you like a reminder of this post dedicated to facts about cranberries? Just pin this image to one of your trivia boards on Pinterest so that you can easily find it later. 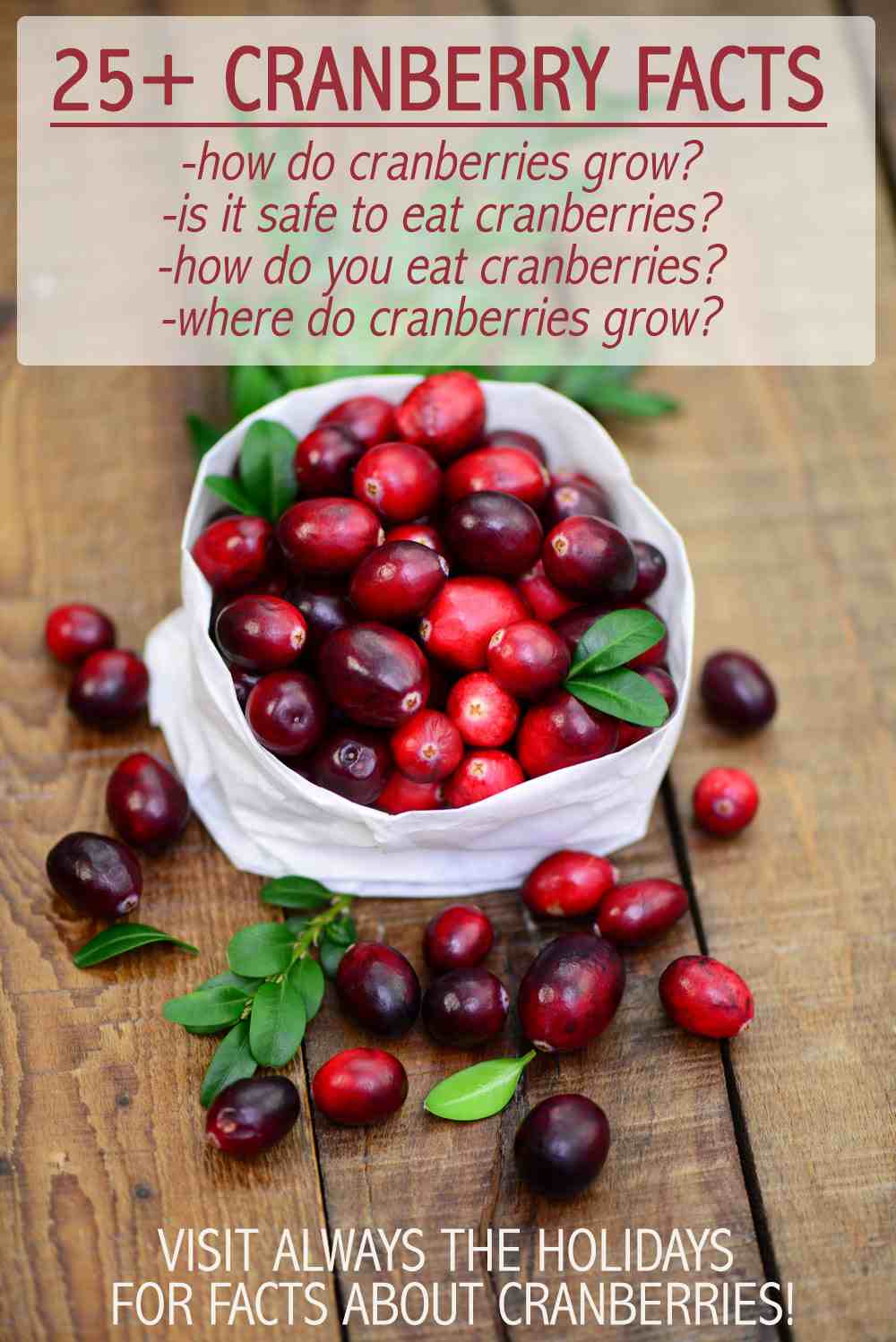