Even though New Year’s Day is behind us now, Chinese New Year traditions and celebrations are still to come.

From special food, to firecrackers and couplets, this special day in the Chinese calendar is full of wonderful activities.

Chinese New Year is associated with many traditions, myths and customs. Read on to find out more about this colorful day.

This special day in the Chinese calendar is not only celebrated on a different day, but the honoring the day is done in quite a different way, as well. 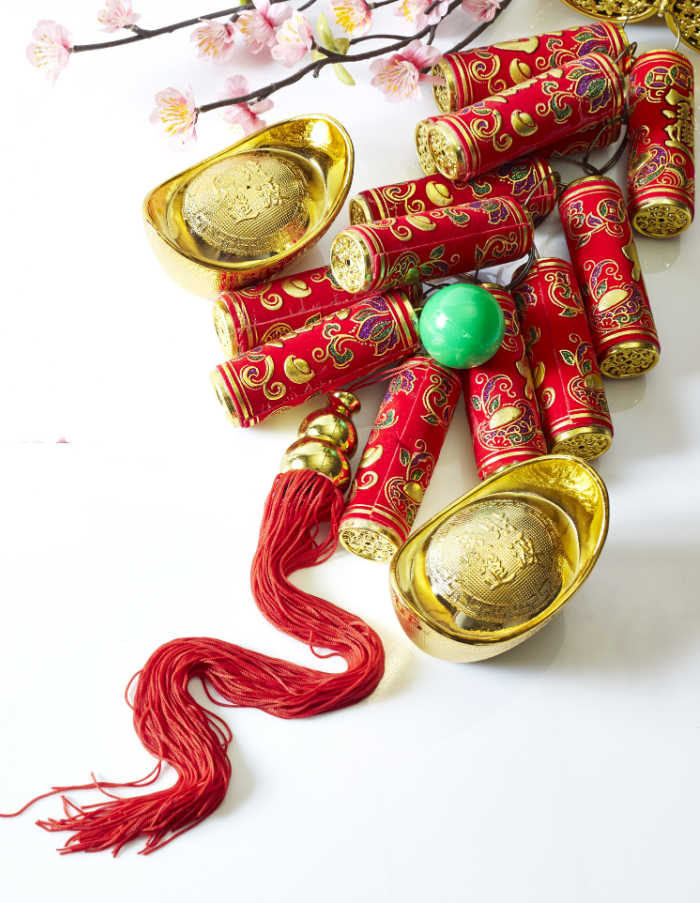 If you are interested in the traditions of the Chinese New Year, be sure to check out our post on the meanings of Halloween. It is more spiritual than you might think.

What is the Chinese New Year?

The Chinese New Year is a traditional holiday that is celebrated on the first day of the Chinese calendar. The date is determined by the lunar calendar.

The holiday falls on the second new moon after the winter solstice of December 21.

In 2023, the first day of the Chinese New Year falls on January 22, nearly a month later than our normal New Year. The holiday is celebrated until the lantern festival on February 5. 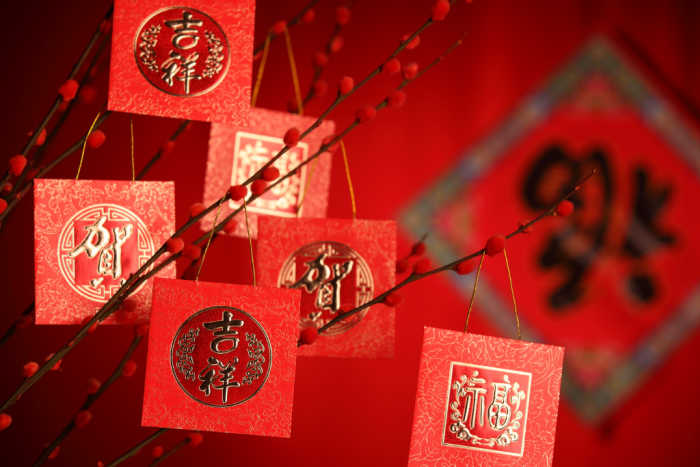 In China, this annual holiday is also known as the Spring Festival. The holiday marks the end of winter and beginning of the spring season.

Observances take place from New Year’s Eve (the evening of the day before the first day of the Chinese calendar) to the day of the Lantern Festival, which takes place on the 15th day of their new year. This makes it the longest festival in the Chinese Calendar.

In China, this is an official public holiday. The Chinese people can get seven days off work. Even though the public holiday is 7 days long, many people celebrate the day for a longer period of time.

The origin of the Chinese New Year festival can be traced back to about 3500 years ago. 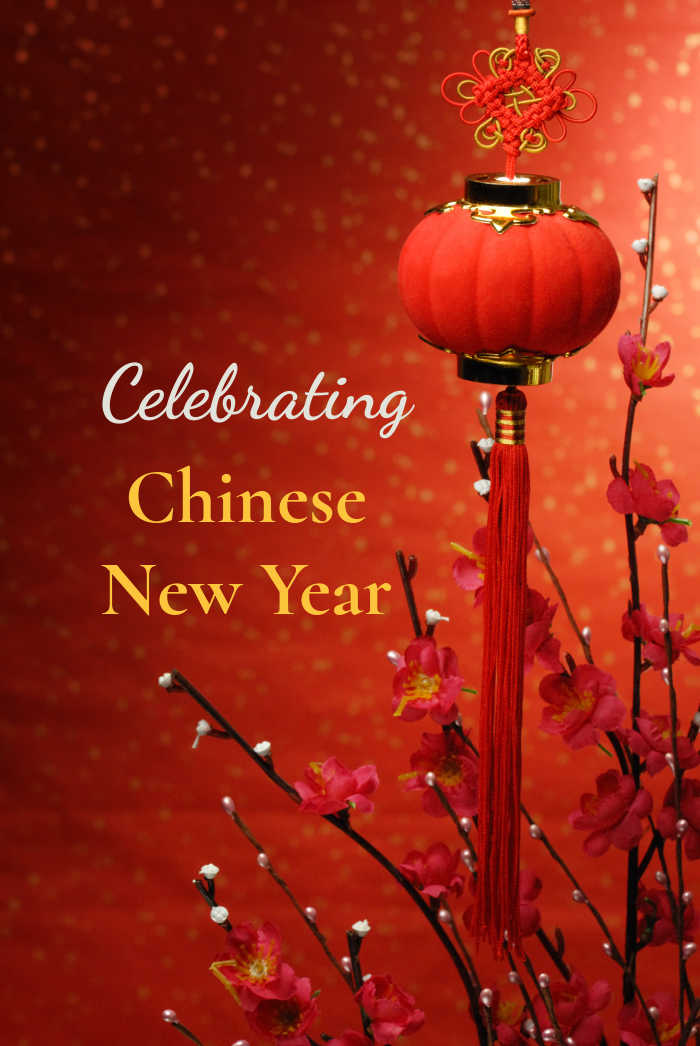 This holiday has evolved over time and its customs have also undergone changes. Food, decorations, activities and many more things are part of this annual celebration.

Legends about the Chinese New Year

One legend tells us that, in ancient times, Buddha asked all of the animals to meet him on the Chinese New year. Since 12 animals came, Buddha named a year after each one.

Another popular legend features the mythical beast Nian, who ate crops and livestock (and even people!) on the eve of a new year. To prevent this happening, people put out food at their doors for Nian.

Since Nian was afraid of loud noises and the color red, lanterns and red scrolls were also used to stop Nian from entering. 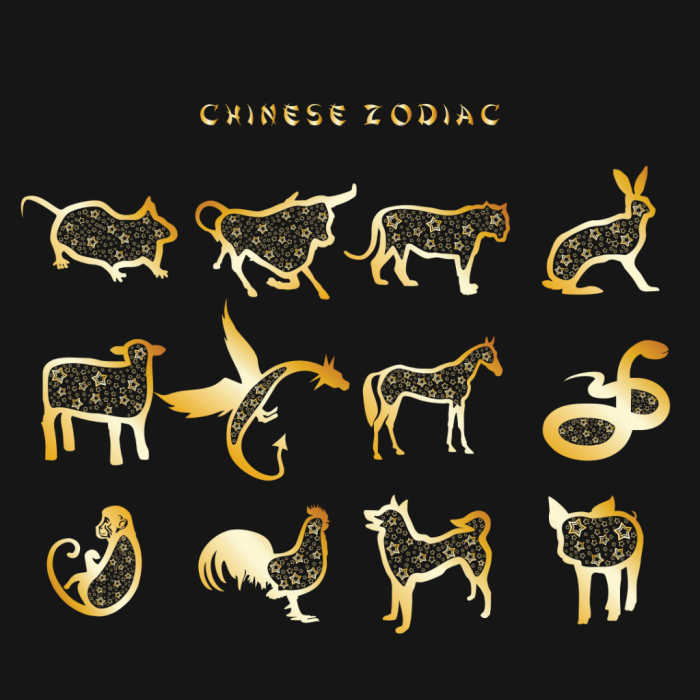 Regional customs and traditions celebrating the Chinese New Year vary widely within China. There are some that are popular throughout most of the provinces, however.

January 22 is the start of the Chinese New Year. This year is the year of the Rabbit. Find out more at Always The Holidays.#ChineseNewYear 🉐🧨🎈 Click To Tweet

The evening preceding the Chinese New Year’s day is a time for Chinese families to gather for a reunion dinner. Prior to this, families often clean the house thoroughly to sweep away any bad fortune and to welcome in good luck. 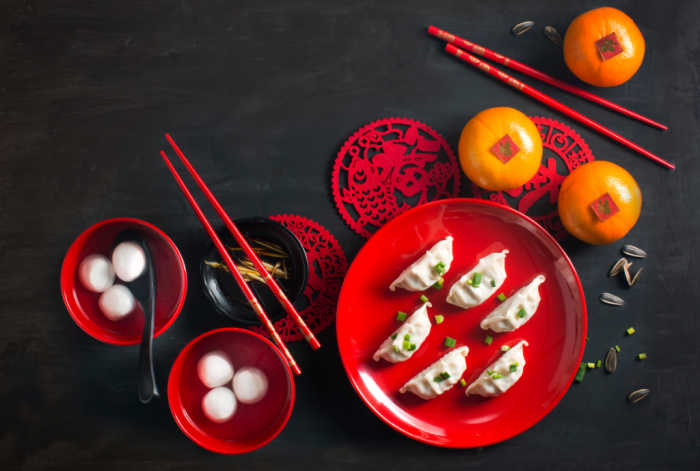 The significance of the family is important in a Chinese New Year celebration. The New Year’s Eve dinner is an important event.

Family tables will often leave an empty spot for those family members who are unable to attend the event.

A few days before the Chinese New Year, many Chinese homemakers will do a complete cleaning of the house to signify the removal of the old and welcoming of the new year.

Windows and doors are often decorated with red colored paper couplets with themes that deal with good fortune. 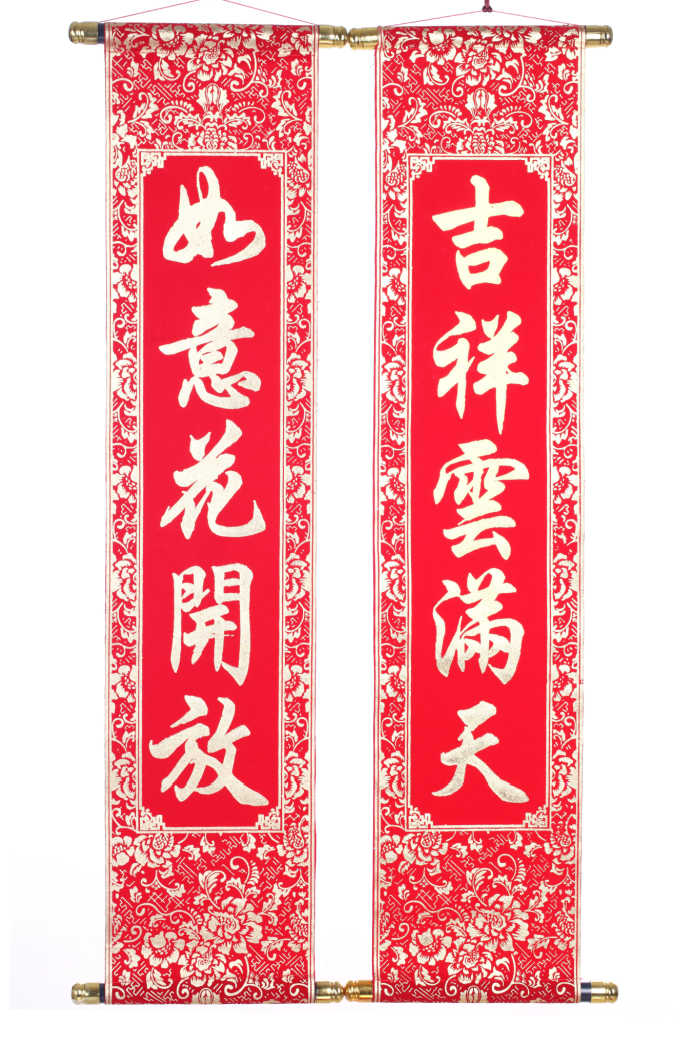 Many Chinese homes are decorated about 10 days before the Spring Festival. Most decorations involve the color red and use lucky images as well.

It is not uncommon to see decorations for the animal of the year.

Here in the USA, we don’t usually decorate for our New Year’s day, but that makes sense, since our celebration is one day and the Chinese New Year lasts for two weeks.

If you would like to decorate for the Chinese New Year, I’ve included a set of couplets in the project card at the bottom of this post that you can print out. Each couplet has a different meaning.

Print out a few copies and attach them to your doorway to bring good luck to your home this year! 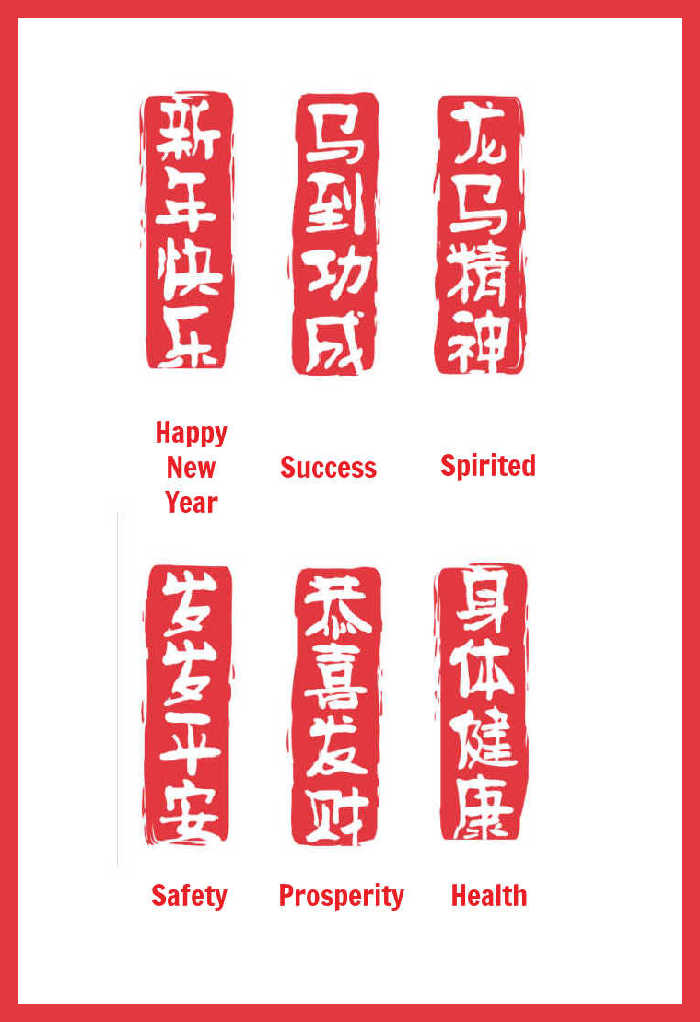 Lighting firecrackers is also popular for Chinese New Year in much the same way as we love to do this for the fourth of July in the United States. 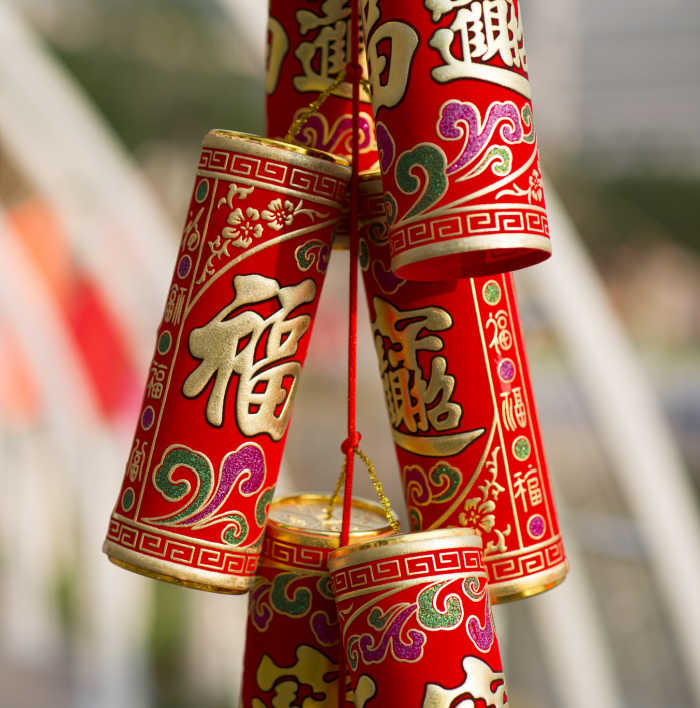 However, the reason for lighting the firecrackers is different. Both firecrackers and fireworks are set off at the stroke of midnight to ward off evil spirits.

The traditional Chinese golden firecrackers are thought to bring security to your home, as well as luck and happiness for the coming year.

In large Chinese cities, fireworks are set off for one to two hours.

In some homes, families set off firecrackers when before they leave the house. This symbolizes good luck for the coming year

Many people give money in red paper envelopes. These are often given to children from their parents, grandparents, and other close friends as Chinese New Year gifts.

Red is considered the luckiest color in China, and it is widely used during festivals such as the Chinese New Year and other important events like weddings. These money envelopes are often decorated in gold and have sayings on them. 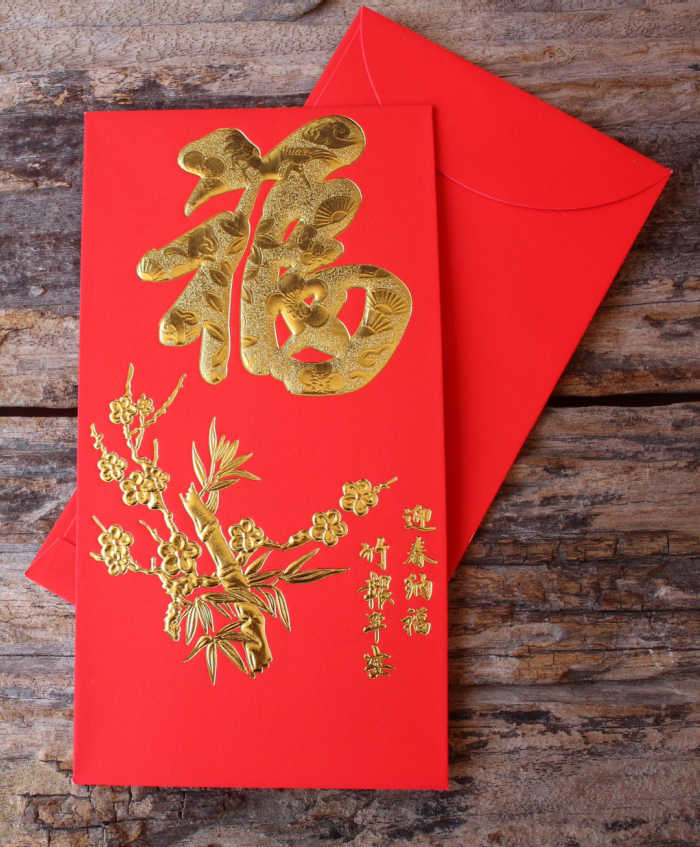 Generally, the closer the relationship is, the higher the amount of money in the envelope. Some companies give employees a red envelope with a holiday bonus on the last working day of the New Year.

On the 15th day of the Chinese New year, the Lantern Festival is held. Some of the lanterns are real works of art, painted with birds, flowers zodiac signs and the like.

A parade is held on Lantern Festival Day and children carry lanterns. 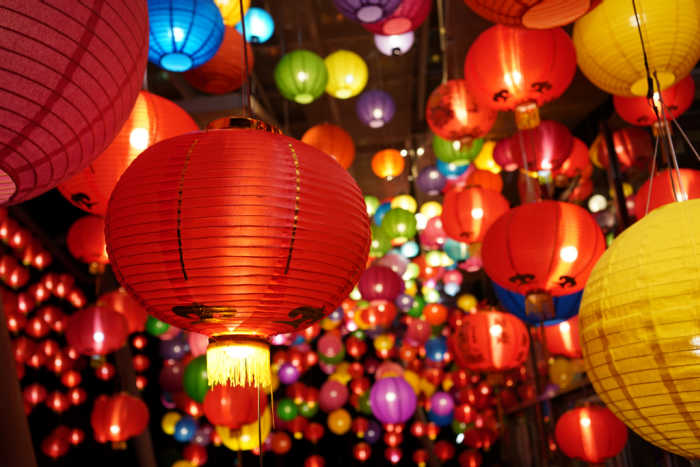 This festival has become a day of great significance and dates back to the Western Han Dynasty.

In ancient times, the lanterns were simple objects, with more ornate ones being only used for emperors and noblemen. In modern times, ordinary citizens embellish their lanterns with more complex designs.

Our Western calendar, which used to be called the Gregorian calendar, is a solar calendar. The calendar counts the time it takes for the earth to go around the sun once a year.

Each year, the months have the same number of days, except for leap years when February gets an extra day.

This means that months in the Chinese lunar calendar have a variable number of days each year. Sometimes, that means a whole extra month!

During the days when the Chinese New Year festival is celebrated, temporary markets are set up that sell mainly New Year’s goods such as red clothing, fireworks, decorations and traditional food. 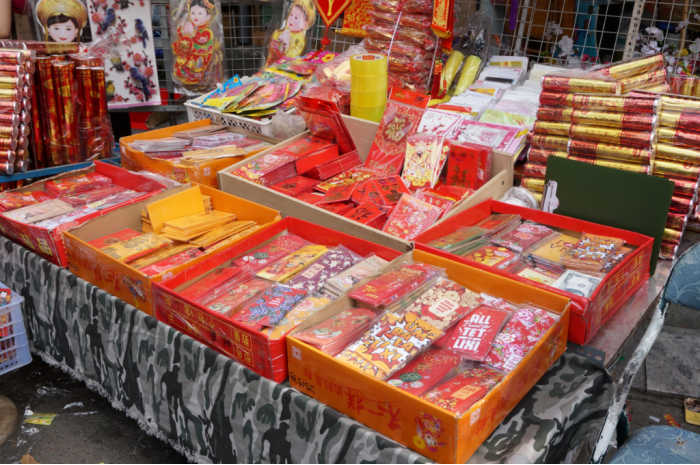 The markets are often decorated with a large amount of lanterns, and animals such as rabbits which focus on a zodiac animal year, since both feature prominently in the Chinese New Year’s celebration.

Colors and the Chinese New Year

Colors are important in the festival, with red and gold being most commonly used throughout the celebrations.

The color red is chosen for two reasons. The first is because red is a considered a lucky color and the second because it is thought that the color will frighten off the monster Nian who is thought to come on New Years Eve. 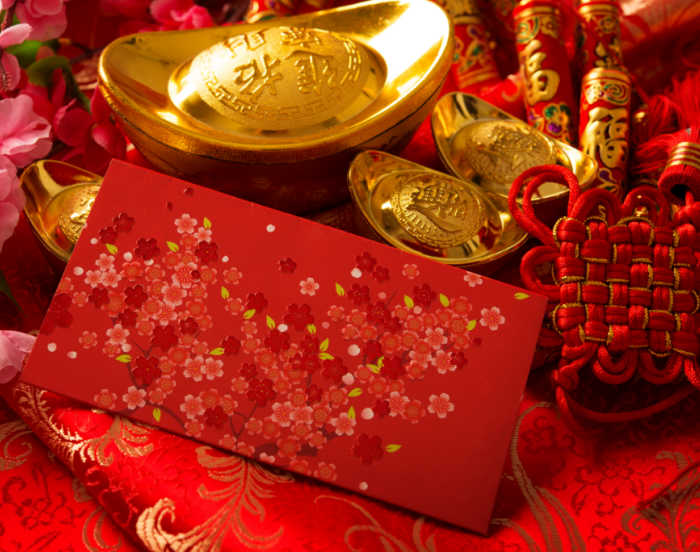 The color gold represents wealth so it is used in hope of coming riches in the new year.

Each holiday has colors that are associated with it. If you’d like to learn about other holidays with symbolic colors, check out our guides to Valentine’s Day colors and Mardi Gras colors.

Each year of the Chinese calendar celebrates a different animal. There is a year repeating cycle where each animal gets a turn for a year.

Those of you who are stubborn will be delighted to learn that 2023 is considered the Year of the Rabbit in the Chinese astrological calendar.

When this Year of the Rabbit is over, we’ll have to wait until 2033 for it to be celebrated as the year of the rabbit again.

Departed relatives are an important part of The Chinese New Year. The holiday is a time to honor household and heavenly gods and to always honor relatives that have passed on. 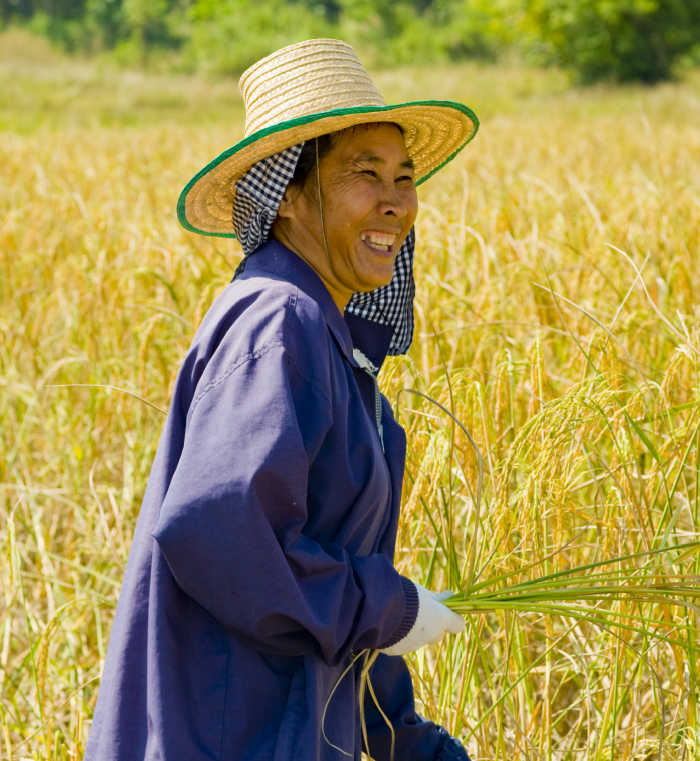 As one would expect, the holiday is celebrated very differently depending on the generation. While older people take great pleasure in honoring relatives, the younger generations of Chinese families now observe the holiday in a very different manner from their ancestors.

For many young people, the holiday has changed from an opportunity to renew family ties to a chance for relaxation from work.

How to celebrate Chinese New YearThis gives us a chance to celebrate both days if we are so inclined. Here are some ideas.

Sticking with traditions throughout the years

It is interesting to me that the Chinese New Year falls during the winter as our Christmas and New Year do. Originally, the celebration was set to coincide with a down time before the new year of farming started, and since many Chinese were farmers, this made sense.

Today, even though most of their population is urban, as our is, they often still return to their rural roots for the holiday, just as many of us do when we visit family for the holidays.

Pin this post about Chinese New Year traditions for later

Would you like a reminder of this post celebrating the Chinese New Year ? Just pin this image to one of your boards on Pinterest so that you can easily find it later. 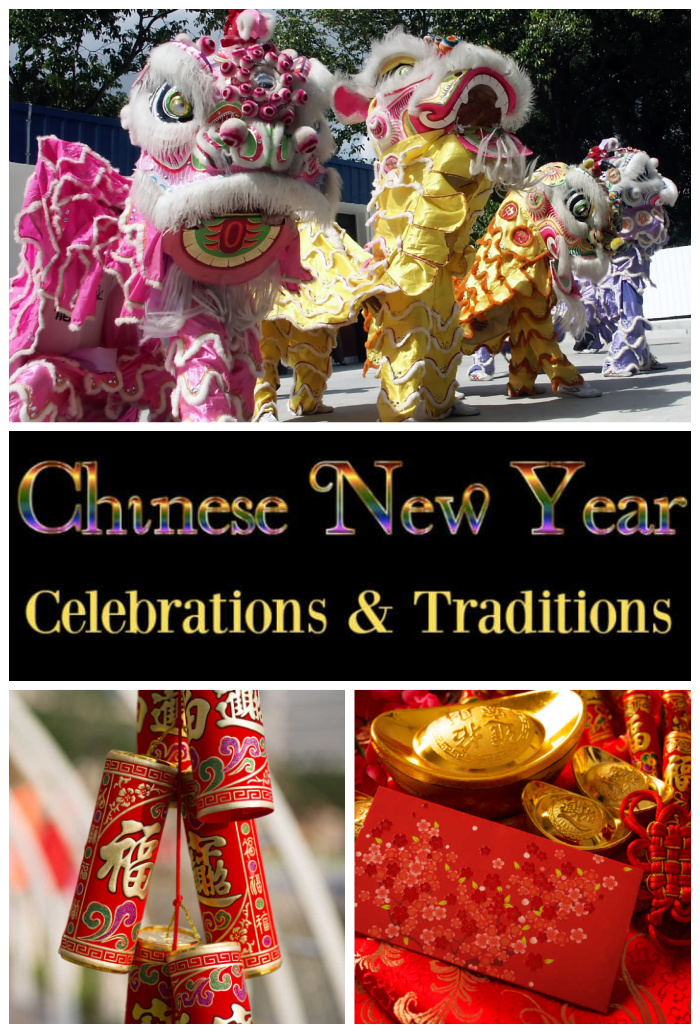 Admin note: This post first appeared on the blog in January of 2014. I have updated the post to add all new photos, updated information about the zodiac animals, printable couplets, and a video for you to enjoy.

Each couplet has a different meaning. Those on the first couplet symbolize:

Those on the second couplet symbolize: