It’s time for the debate, candy apple vs caramel apple, what’s the difference and which is better? Let’s learn their histories and attributes.

Apples are a staple of fall, whether it is picking apples, eating apple snacks or adding a coating to them to make candy apples. 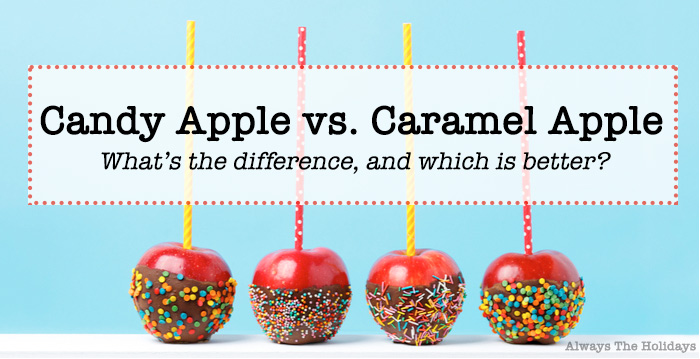 Bobbing for apples, a game based on old Celtic traditions of Samhain, a precursor of Halloween is also popular.

Both of the apple desserts we are learning about today are served in the fall, and they feature apples on a stick with some sort of sweet coating. However, they are pretty different when you look at how they were created, their unique flavor profiles, and even the time of year they are served.

There is actually a day devoted to celebrating caramel apples – October 31 is National Caramel Apple Day and some people even celebrate candy apples on the same day.

Who invented the candy apple?

Did you know that candy apples have been around for over a hundred years? These tasty treats have not only a wonderful flavor, but they have a fascinating history as well! 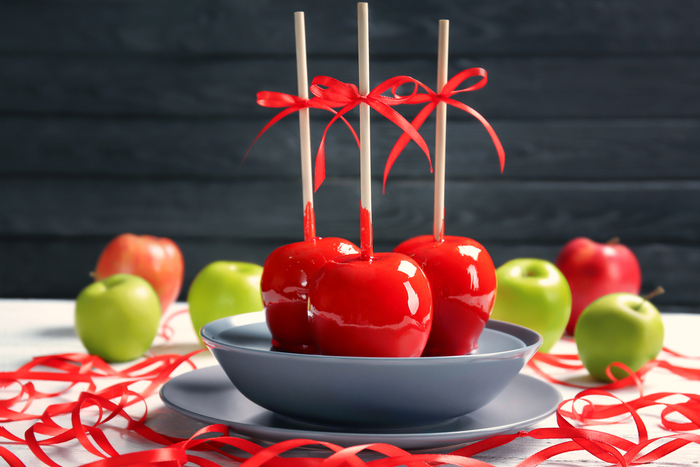 He originally coated the apples in the red cinnamon candy to use solely for display in his shop window, but the customers who passed by this shop had other ideas!

They thought these magnificent red apples would make delicious treats, and began buying the candy apples instead of the candies they had been meant to be advertising.

William Kolb sold his first batch of candy apples for only 5 cents, which is the same as $1.41 today. That’s amazing, since you’d be hard pressed nowadays to find a single candy apple that only costs $1.41!

Traditional candy apples are cinnamon flavored, to resemble the apples created in 1908, though not all candy apples sold today have the flavor of cinnamon. 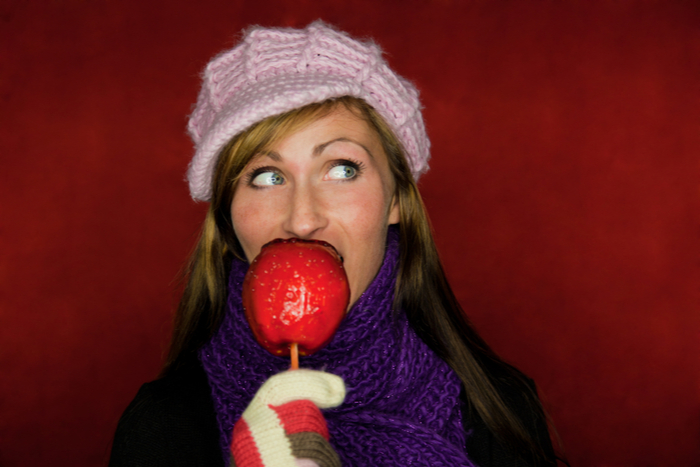 Candy apples were never intended to be eaten! Kolb only wanted them to be display pieces in his candy shop window, not the tasty treats we know them as today.

This culinary treat coined the term “Candy Apple Red”. It can be used to describe anything from fast cars to painted nails!

Candy apples are best when made in the fall. Apple crops yield their loveliest apples during this time, and a fresh apple is the key to the tastiness of this treat.

Apples are also used in other fall treats. Be sure to check out my monster mouth apple snacks for another tasty idea.

While you can use any apple for candy apples, it is thought that Granny Smith apples work best. They provide a nice color contrast with the red candy coating.

This apple yields a greater depth of flavors than other apple types, because their tart and fresh bite contrasts nicely with the sweet and spiced coating. 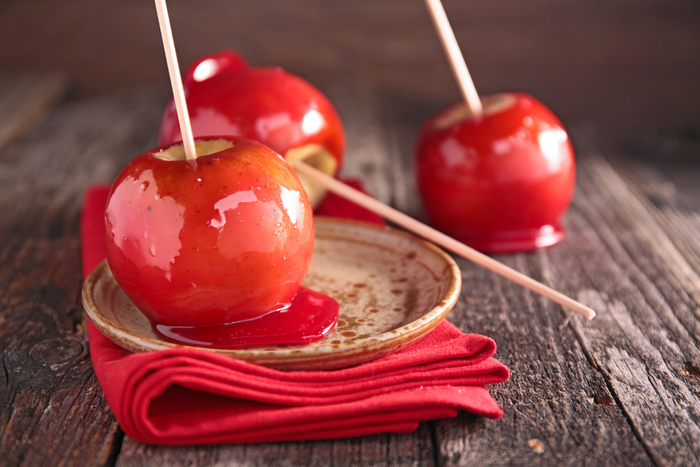 The candy apple coating is typically made up of sugar, water, corn syrup, cinnamon and red food coloring.

Sometimes you’ll see candy apples with a topping, like peanuts or sprinkles, but that’s usually more characteristic of caramel apples. Most candy apples don’t have toppings.

Who invented the caramel apple?

While the candy apple was invented in 1908, the caramel apple wasn’t invented until 1950. Better late than never, I say! 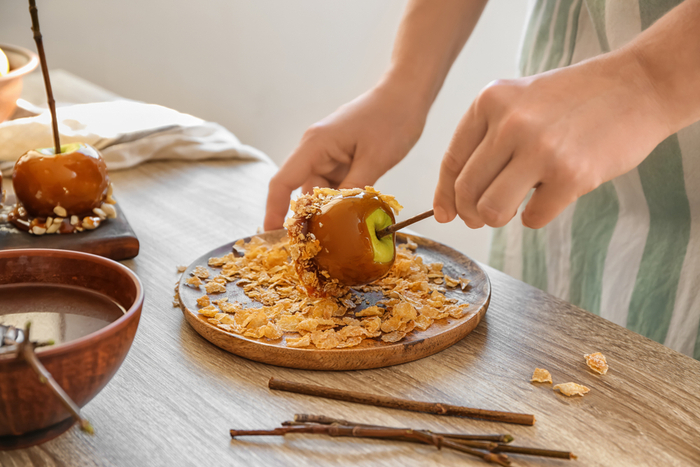 An employee of the Kraft foods company named Dan Walker invented the caramel apple when he was experimenting with holiday candy.

He melted down some of the surplus of caramel candy from Halloween that the Kraft foods company had on hand, and dipped an apple in it. Thus, the caramel apple was born!

Caramel and apples are always a popular combination in the fall. You can combine them in lots of other ways. Check out my caramel apple bars, also made with left over Halloween candy!

In Chicago, Illinois in the 1960s, Vito Raimondi (with the help of his Uncle William Raimondi) invented and patented the first automatic caramel apple making machine.

There’s a National Candy Apple Day that falls annually in October! It’s a great excuse to go out and get one of these sweet treats. 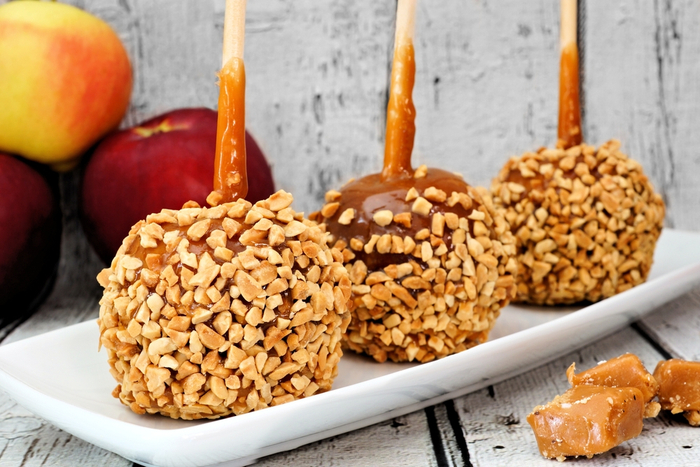 As with candy apples, these treats are best when made and eaten in the fall. There’s no better time to find a good caramel apple, than when the apple orchards are producing their best fruit!

Before the automatic caramel apple making machine was invented in 1960, all caramel apples had to be made by hand. That’s ten years of handmade treats!

Unlike candy apples, caramel apples are known for their toppings! Nuts are probably the most common topping, but there are many different creative caramel apple toppings used today. 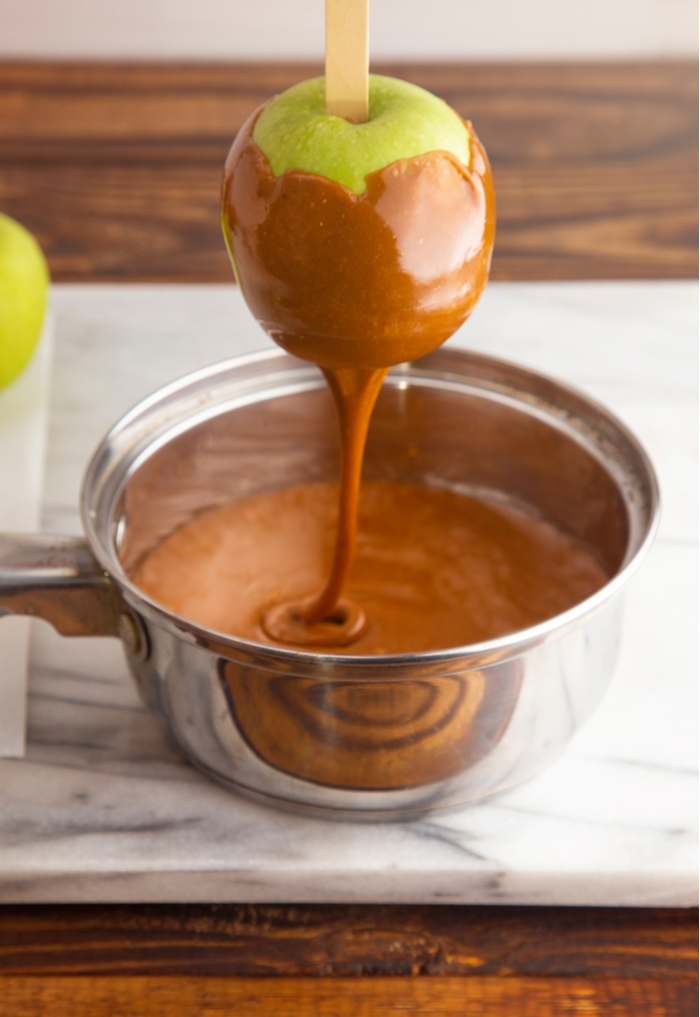 However from there, they vary substantially. While candy apples have a candy coating, caramel apples have (you guessed it!) a caramel coating.

This caramel coating can be made in two different ways. The easiest way is by taking caramels and melting them down. The more challenging, but also rewarding, alternative method is to make your own caramel.

The caramel used to coat caramel apples is made from heavy cream, corn syrup, brown sugar, butter, salt and vanilla.

Caramel apples frequently are dipped in a topping. Nuts are a very common topping, but the sky is the limit with these treats!

Candy apple vs caramel apple – Which is better?

There is a heated debate among dessert lovers and it all boils down to candy apple vs caramel apple, and which is better. 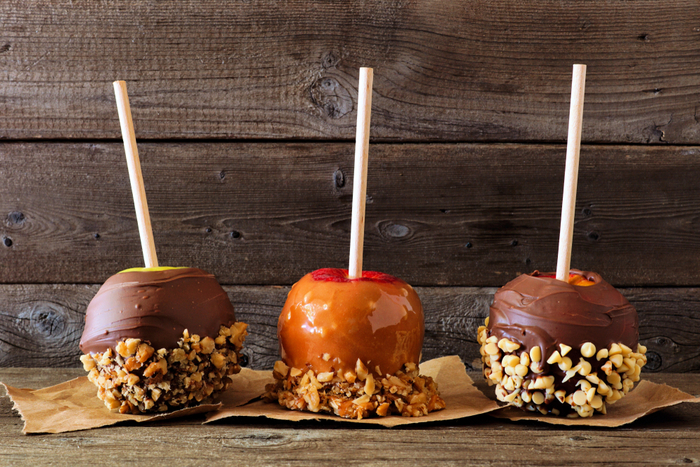 I find that most people have a strong preference one way or another. I love both equally, but I’m probably not in the majority with that opinion.

If you’re asking the question in regards to a Christmas treat, the more historically appropriate choice would be candy apples, since they were designed specifically for Christmas.

However, if you’re asking in regards to Halloween, the more historically appropriate treat would be caramel apples, since they were invented because of Halloween candy.

Both can be served at any time, it really just depends on preference. I recommend you try one of each variety, and decide for yourself!

Don’t forget to head to the comments section of this post and let us know which is your favorite and why – candy apples or caramel apples!

Pin this candy apple vs caramel apple guide for later

Would you save this caramel apple vs candy apple guide for later? Just pin this image to one of your cooking boards on Pinterest and you’ll be able to refer back to this article with ease! 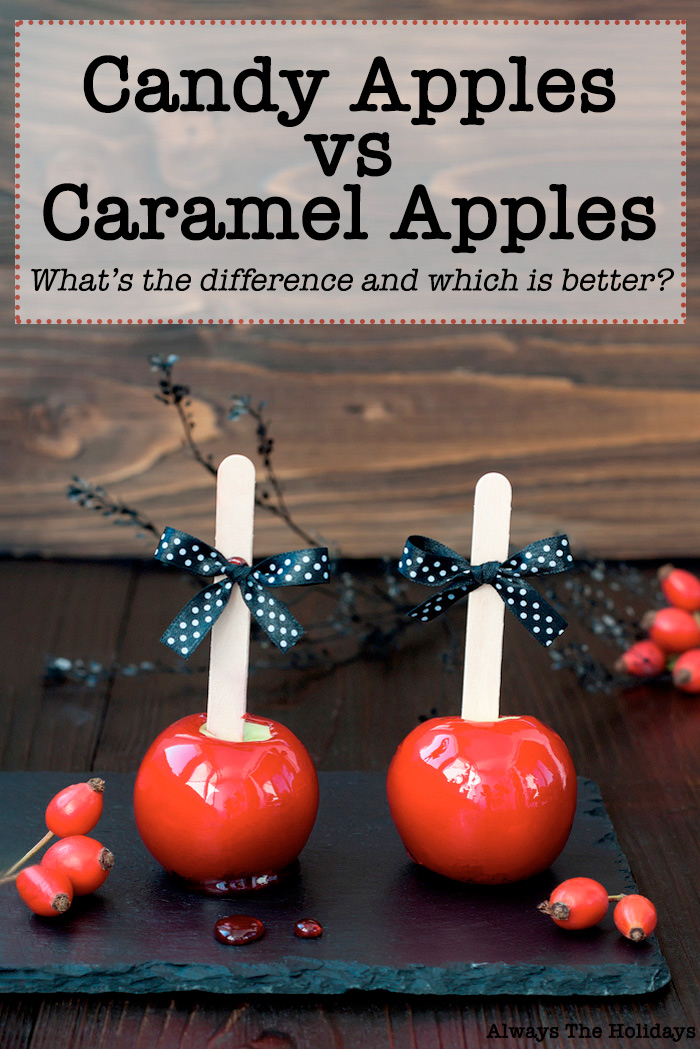 Looking for something to drink with your candy apples and caramel apples? Try a glass of warm apple cider. It’s perfect for fall, too!